Colton's hair has always had a cowlick in back that makes the back of his head look like a mini-Dennis the Menace.  Or maybe Alfalfa from The Little Rascals.  He takes great pleasure in showering before bed and waking up to see how "high" his rooster tail is for the day.

I'd say he earned his nickname from his coach honestly.  Rooster it is.

This mom delighted in all his Rooster ways this weekend in Roseau, MN which is merely miles away from the Canadian border.  Its legendary when it comes to its hockey history and continues to draw crowds to its tournaments every weekend. 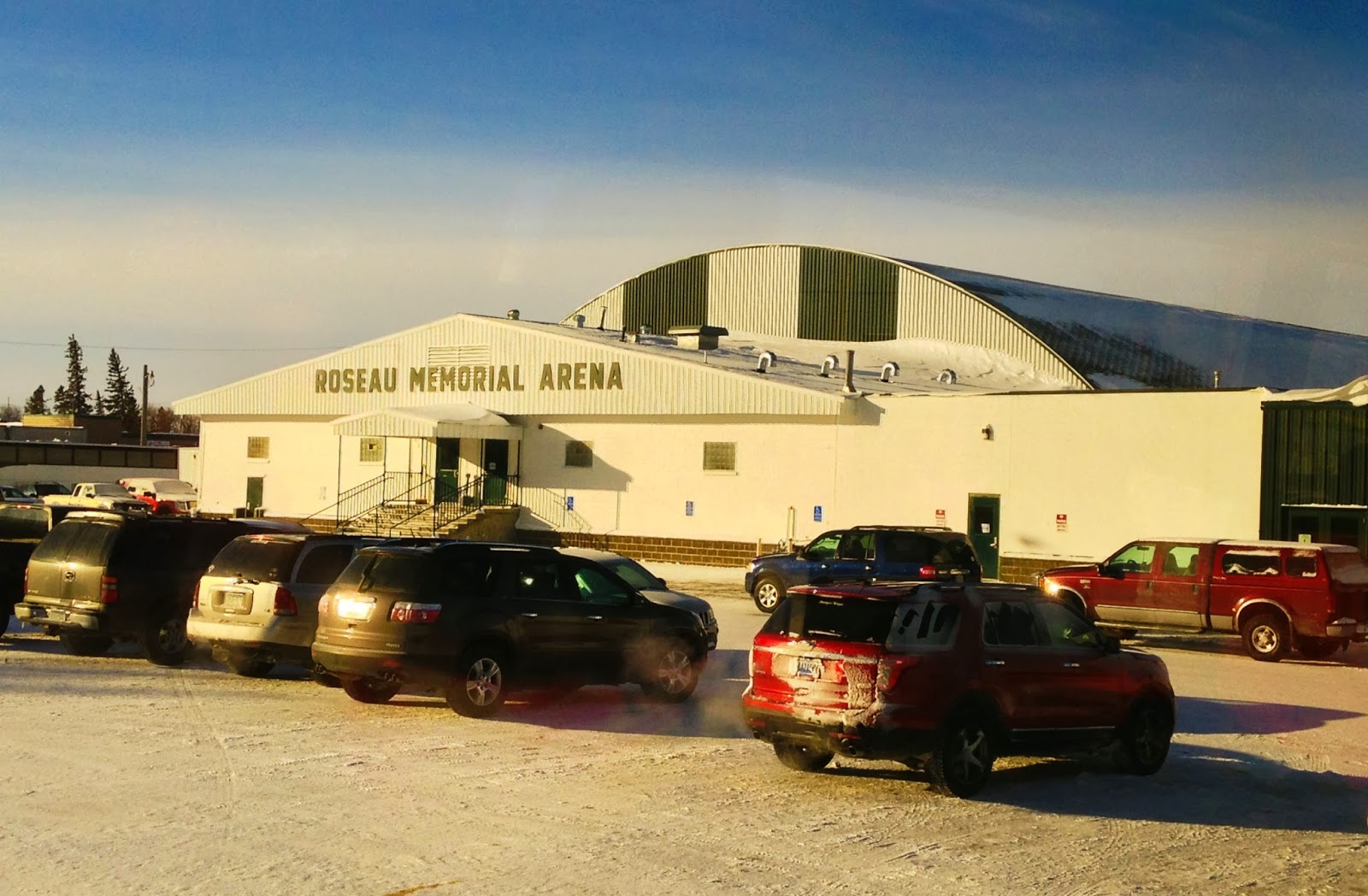 Friday morning we loaded up the bus and arrived in Roseau about 3 hours later, just in time to get our boys ready for their first game that night against Lake of the Woods. We played in the North rink which has the same reputation as our own North rink- much colder than the South rink.

What it is about riding the bus and getting off to go and play hockey, and then you can't find your legs? Our boys were there in spirit, but their feet and minds had clearly been "frozen" somewhere along the way.  We lost our first game. 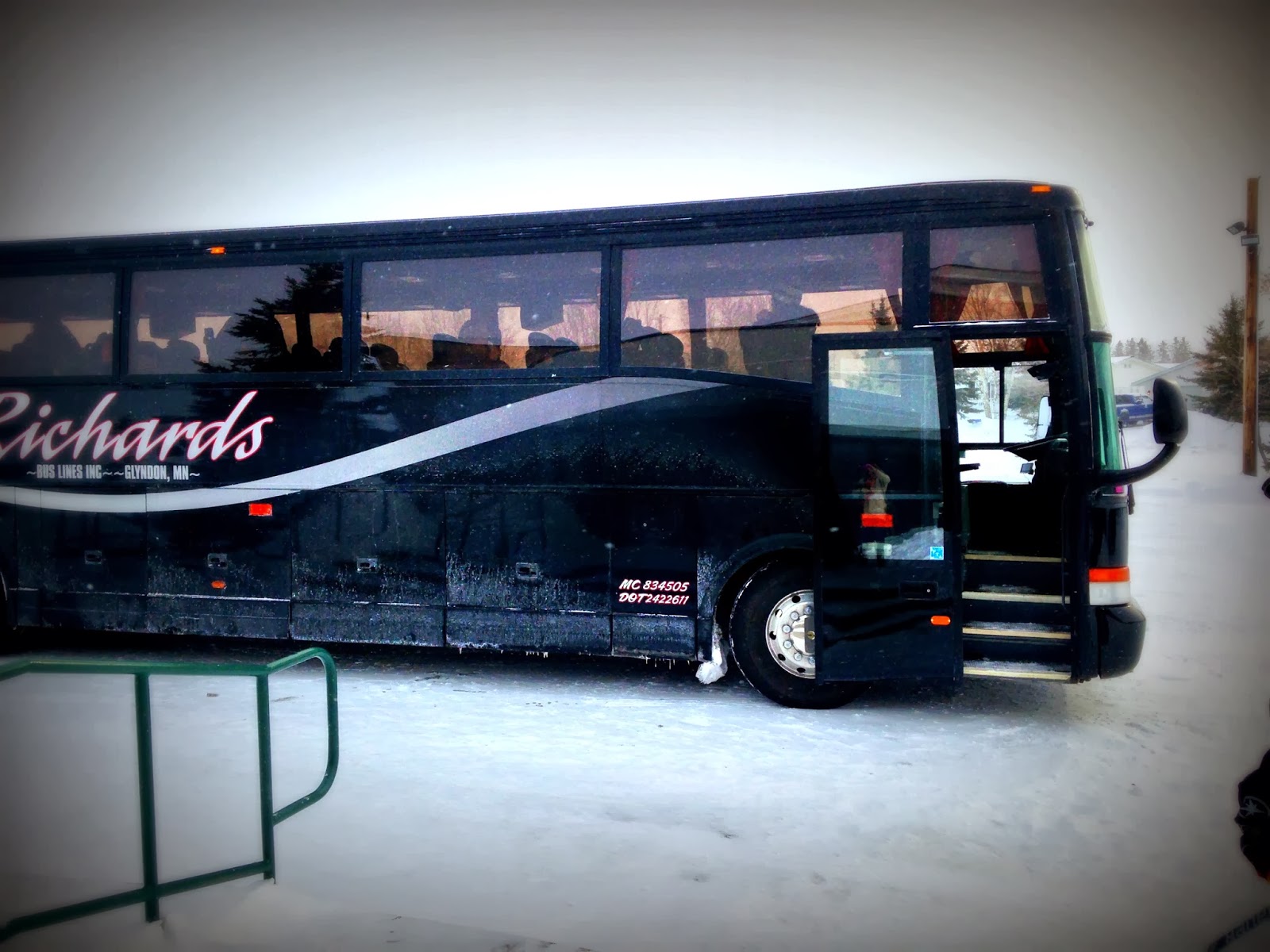 Day 2 we awoke to sunshine and cold with the promise of snow arriving later in the evening. 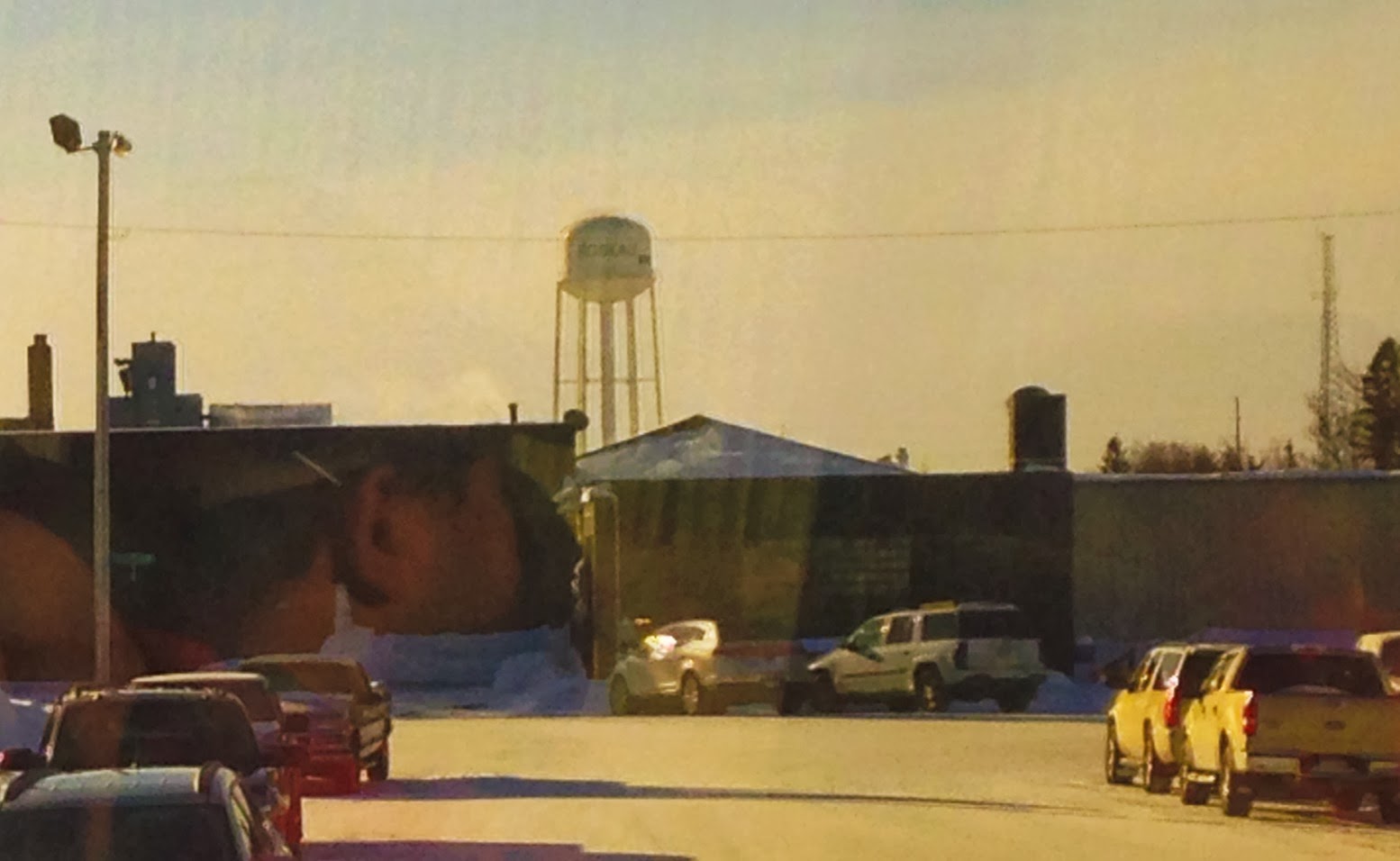 This time we got to play on the South side and boy did that bring us some luck.  Luke, the other goalie,  got to be in net and our boys came from a deficit all the way back to a tie game.  But instead of playing overtime, we went straight to a shootout! I felt so much for Tara, the mother of Luke. Its so hard to see your child feel the pressure of making sure no goals get past them in a 1 on 1 situation.

But Luke, The Wall, did just that.  And our forwards buried one more puck on the other side than the other team did on our side, so we won in the shootout, over Hermantown, who was rumored to be a ranked team.  Those wins always feel extra good. 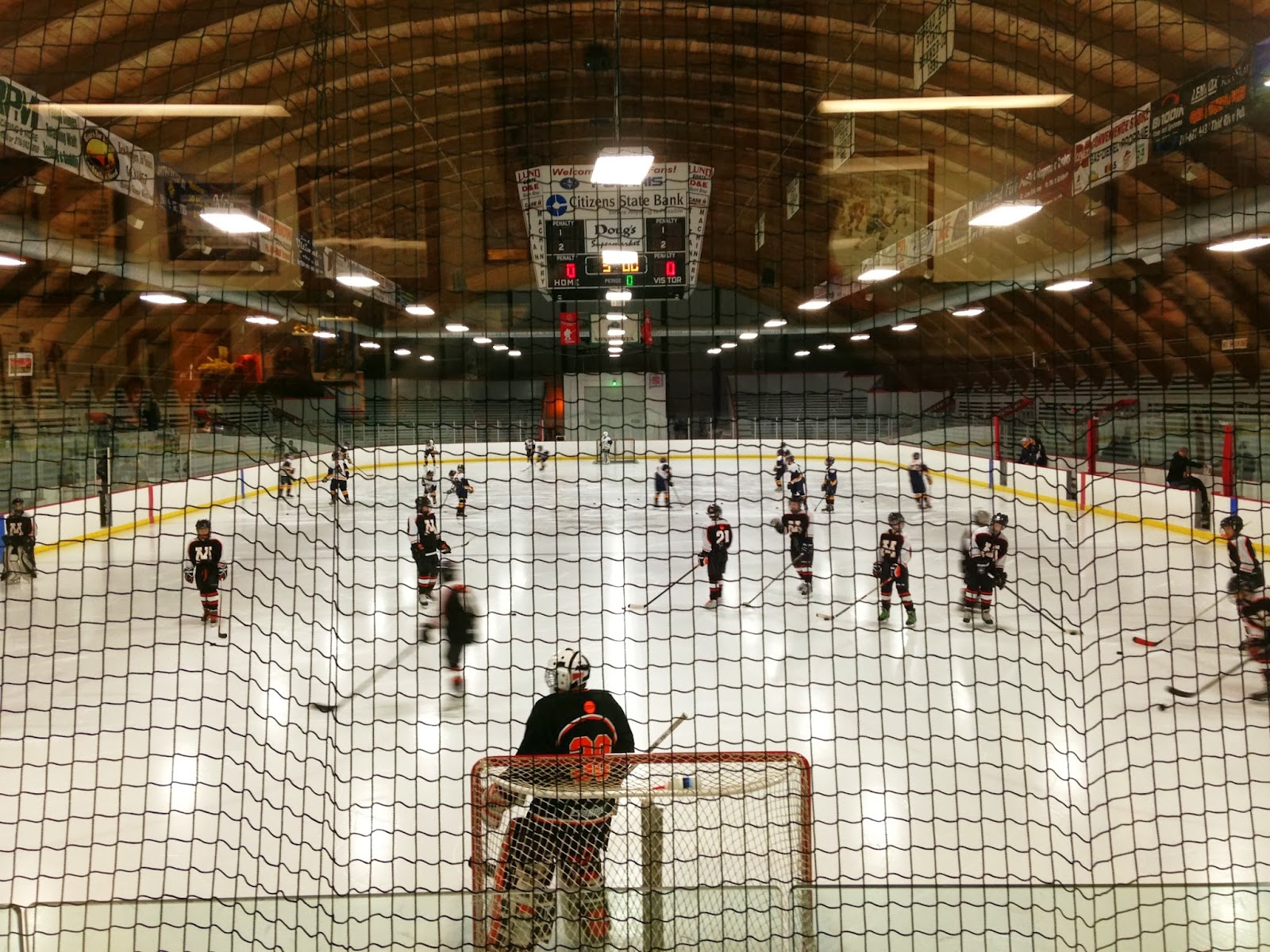 "The barn."  Full of hockey history and nostalgia. 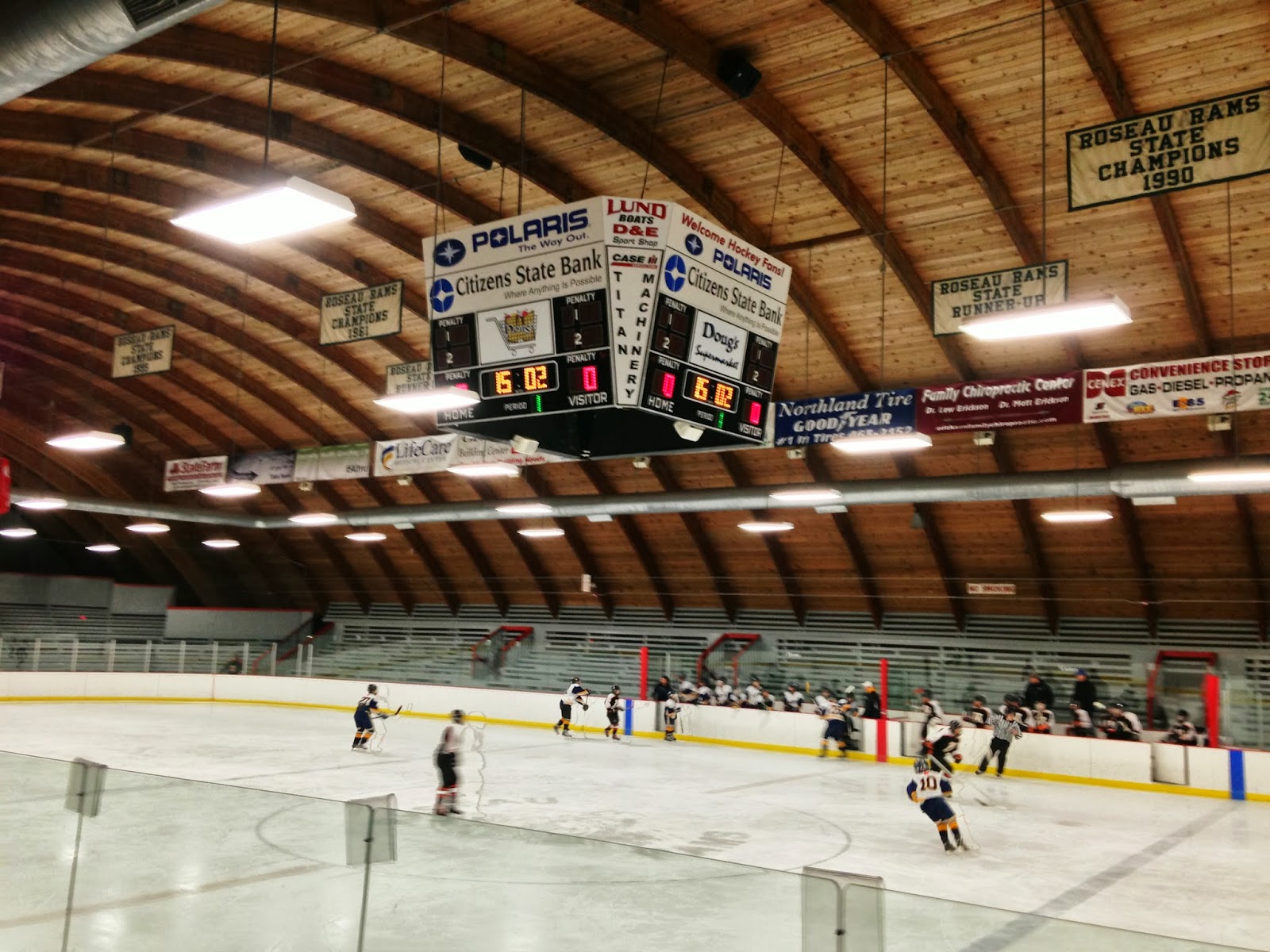 That afternoon it was Colton's turn to be back in the net.  I shuddered as we got down by two goals almost right away.  We were going to have to play "come from behind" hockey again and that is so nerve wracking to watch.  But come from behind we did, and with seconds left in the second period we were all tied up. 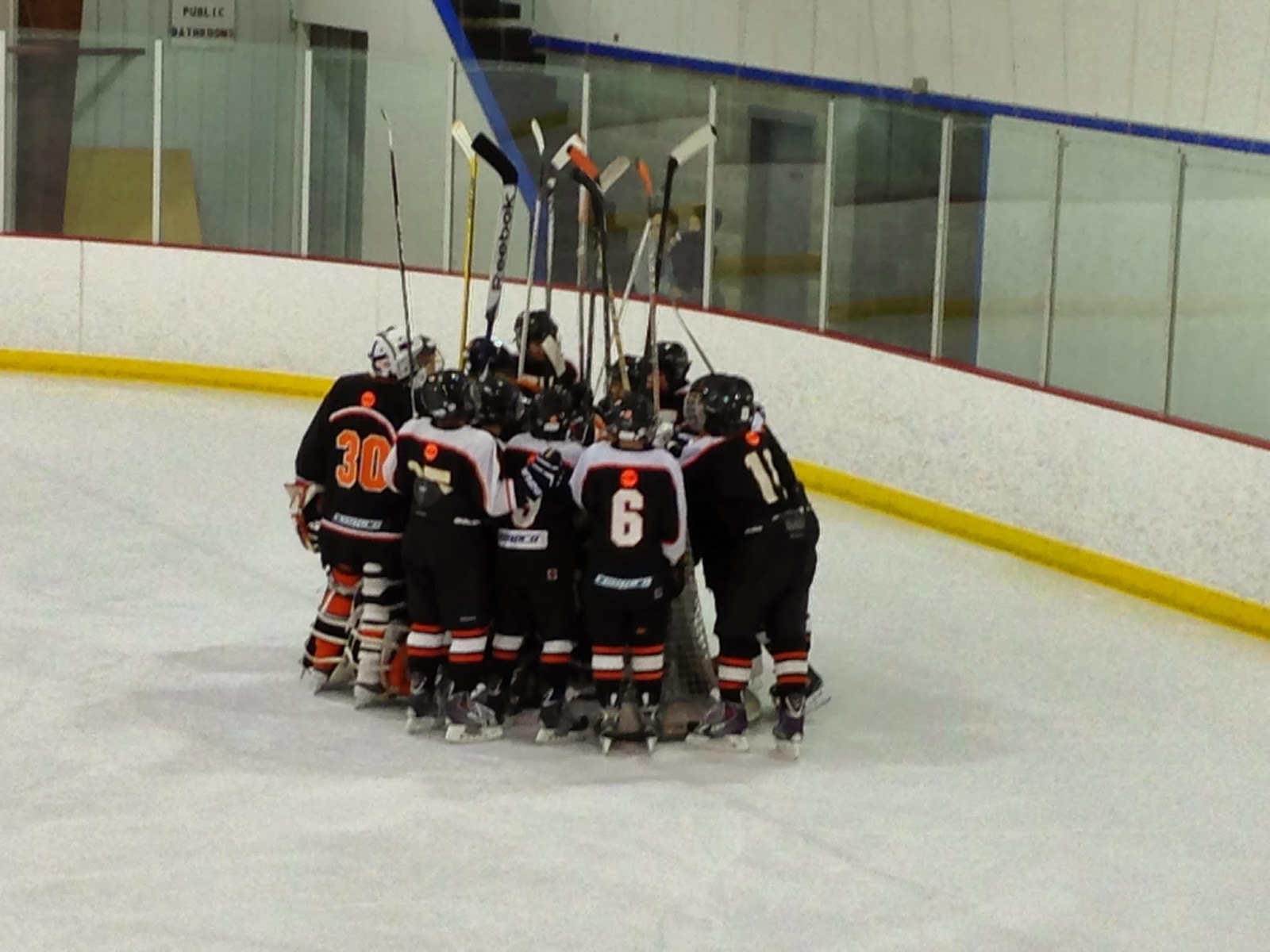 Although I wasn't quite fast enough to capture it, when we finally went up 3 -2, Colton celebrated by doing a snow angel out on the ice.  Oh my stars, that kid, so cracks me up. 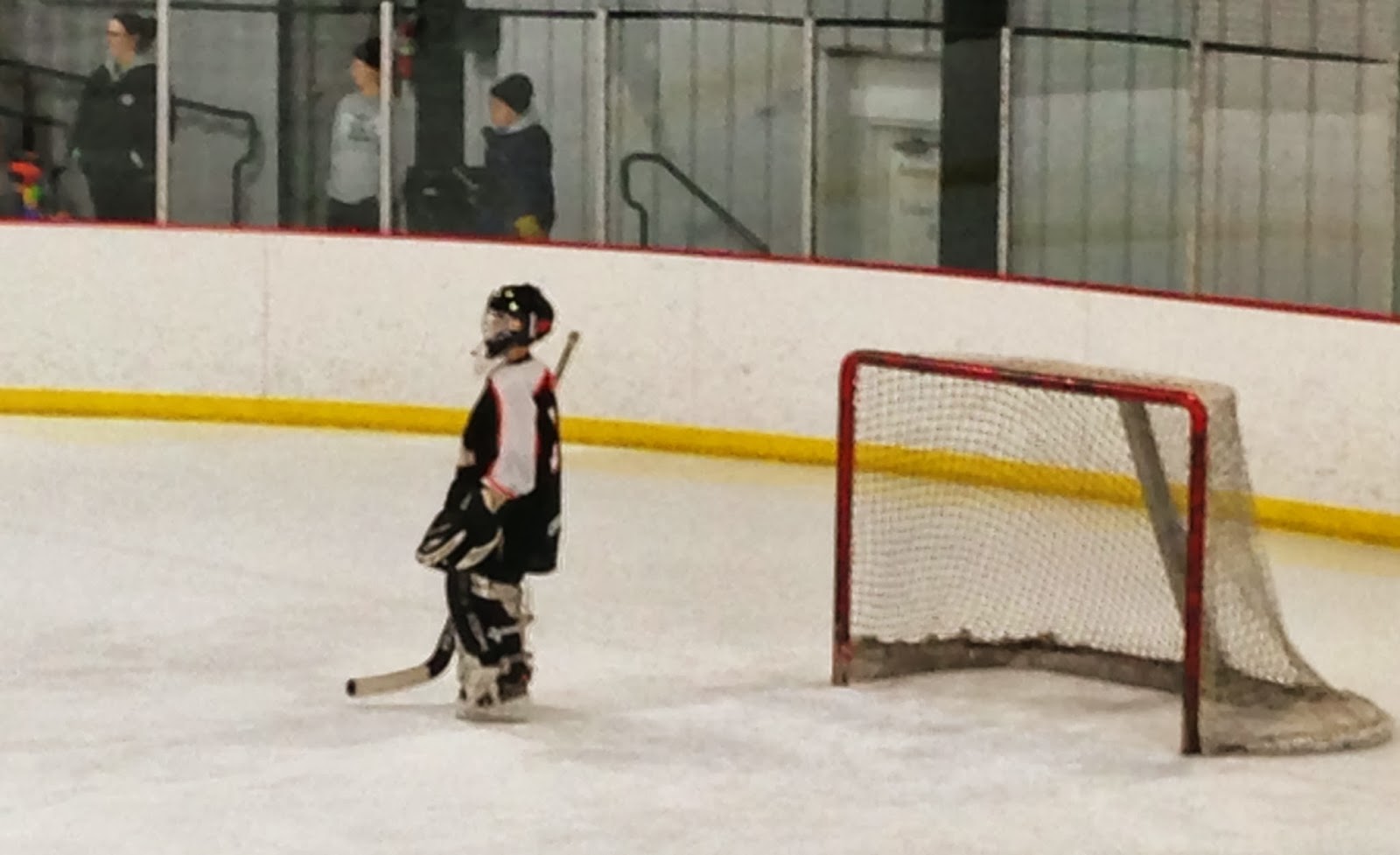 And this little sweet one?  Watches Colton's every move.  So when he was down on the ice doing his angel?  She laid right down and did her own version in the stands- the crowd loved every second of it.  Her little eyes, seek out Colton, and light up every time she sees him.  Its almost too cute for words. 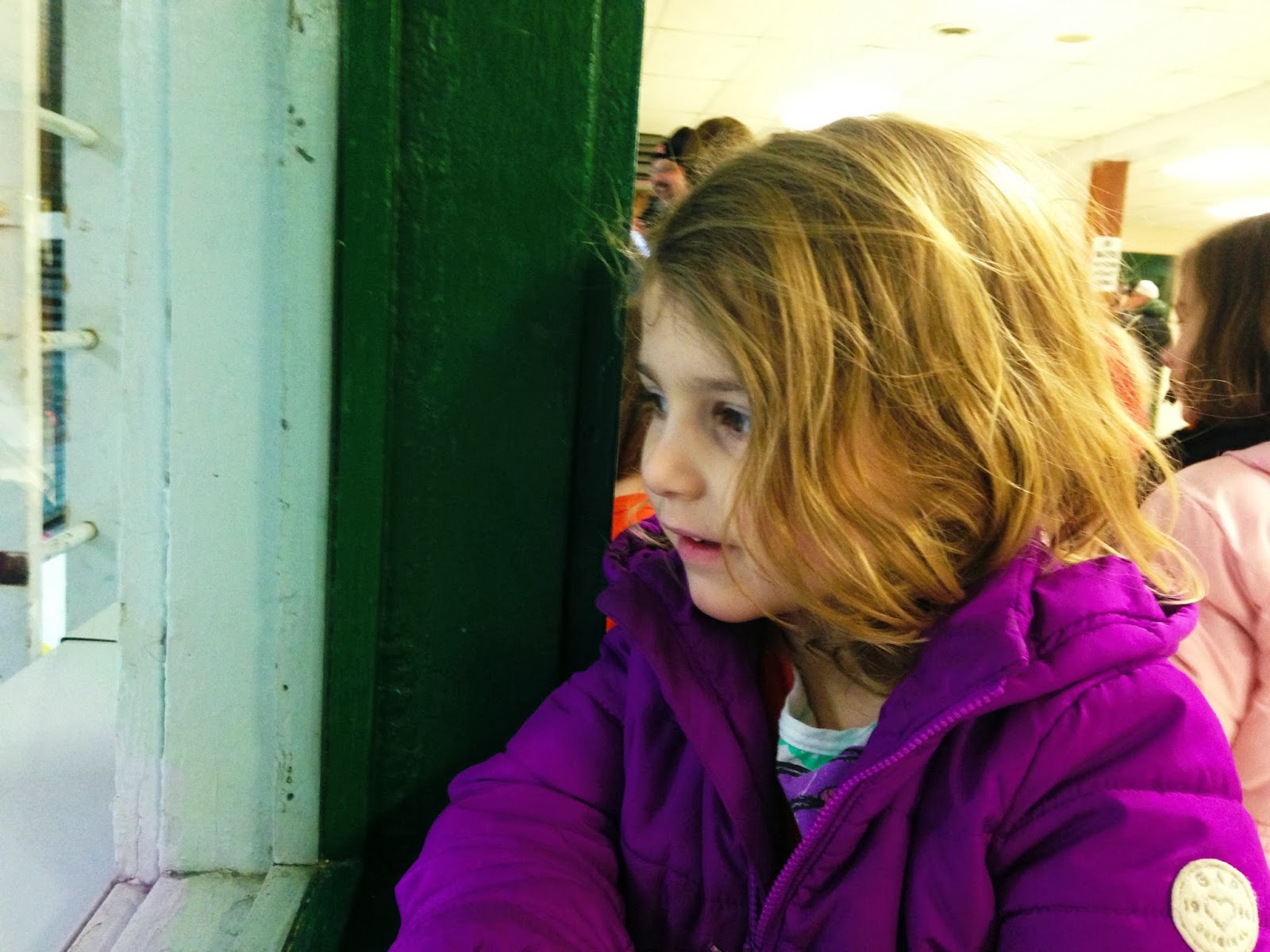 After 2 big wins, an afternoon spaghetti feed at the Legion, and entertainment provided by the "Hanson Brothers," we were off for some fun with bowling.

Colton's coach entered his name as "Rooster," and the kid was literally beaming.  He bowled, danced and sang with the music and clearly had a wonderful time.  It was a pure joy to get to see him so thoroughly enjoying himself. 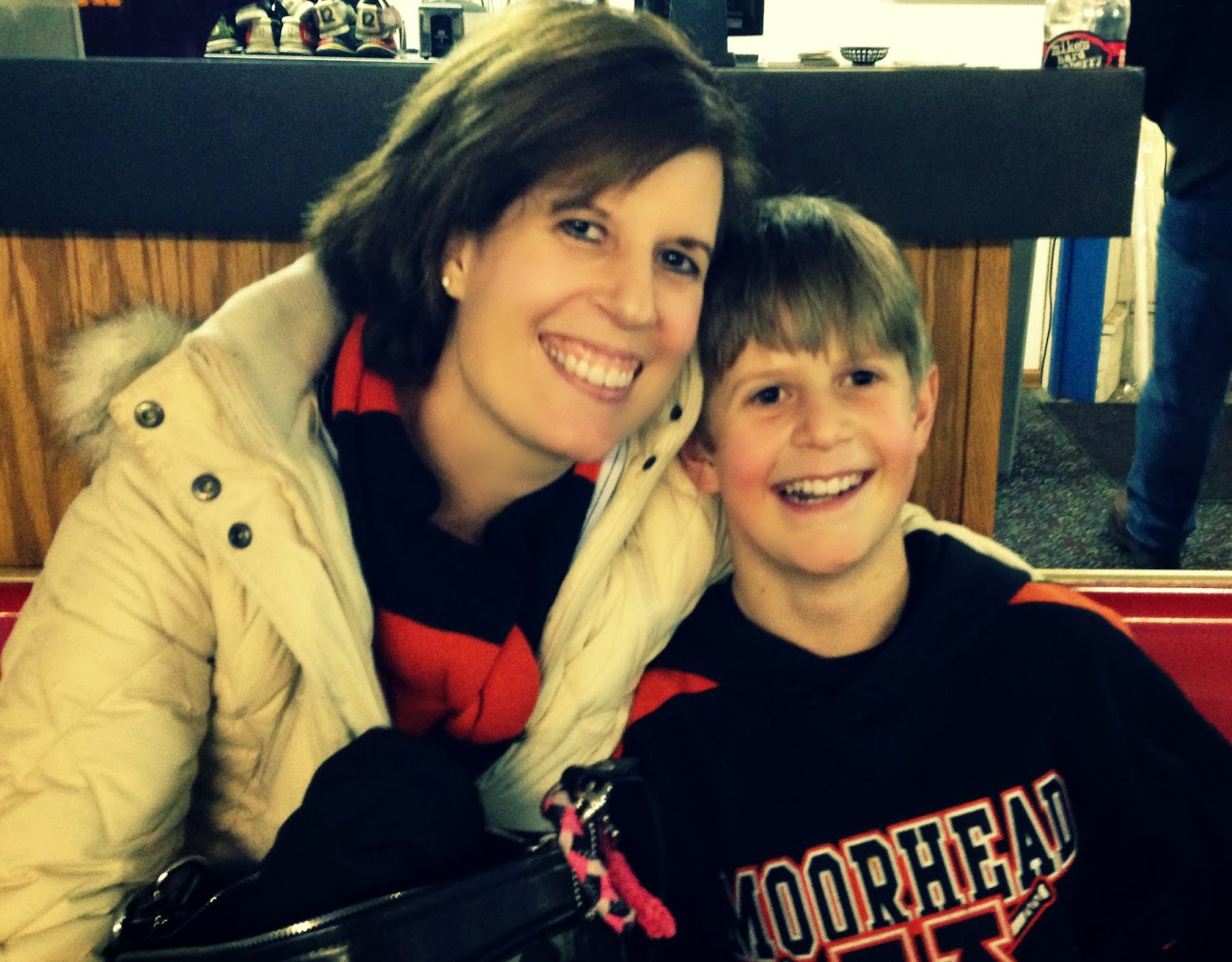 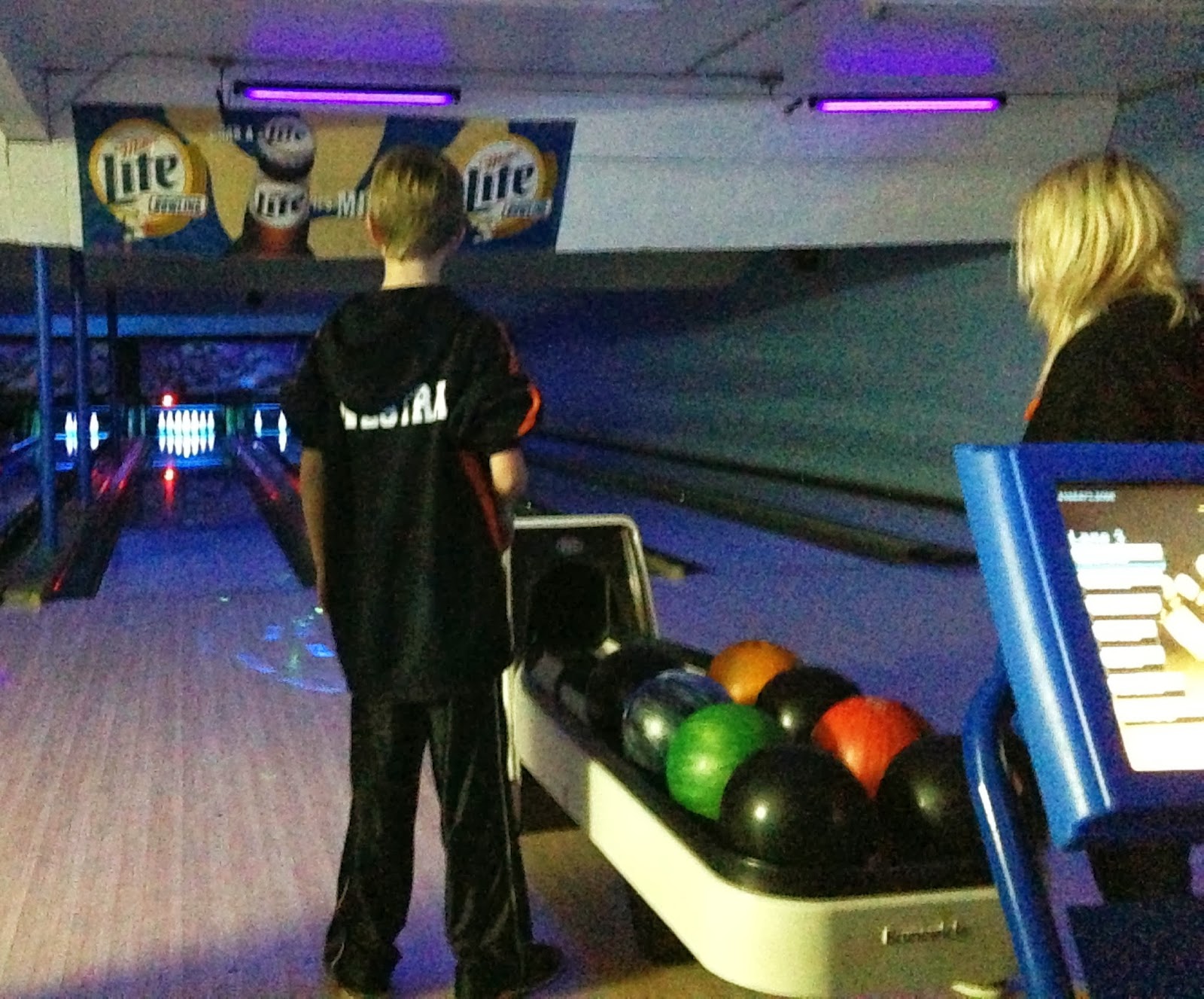 And I got to hang out with so many fun people.  This is my friend and neighbor, Anne, and I love that we have our boys on the same team this year.  Anne watches out for me always and is a true angel - as were so many other people this weekend.  Whether they helped carry in our bags, or helped get food, or encouraged Colton, or simply asked if I needed anything, it was all so deeply appreciated by Colton and I.  We are extremely grateful for the love and support we felt and continue to feel by our hockey family. 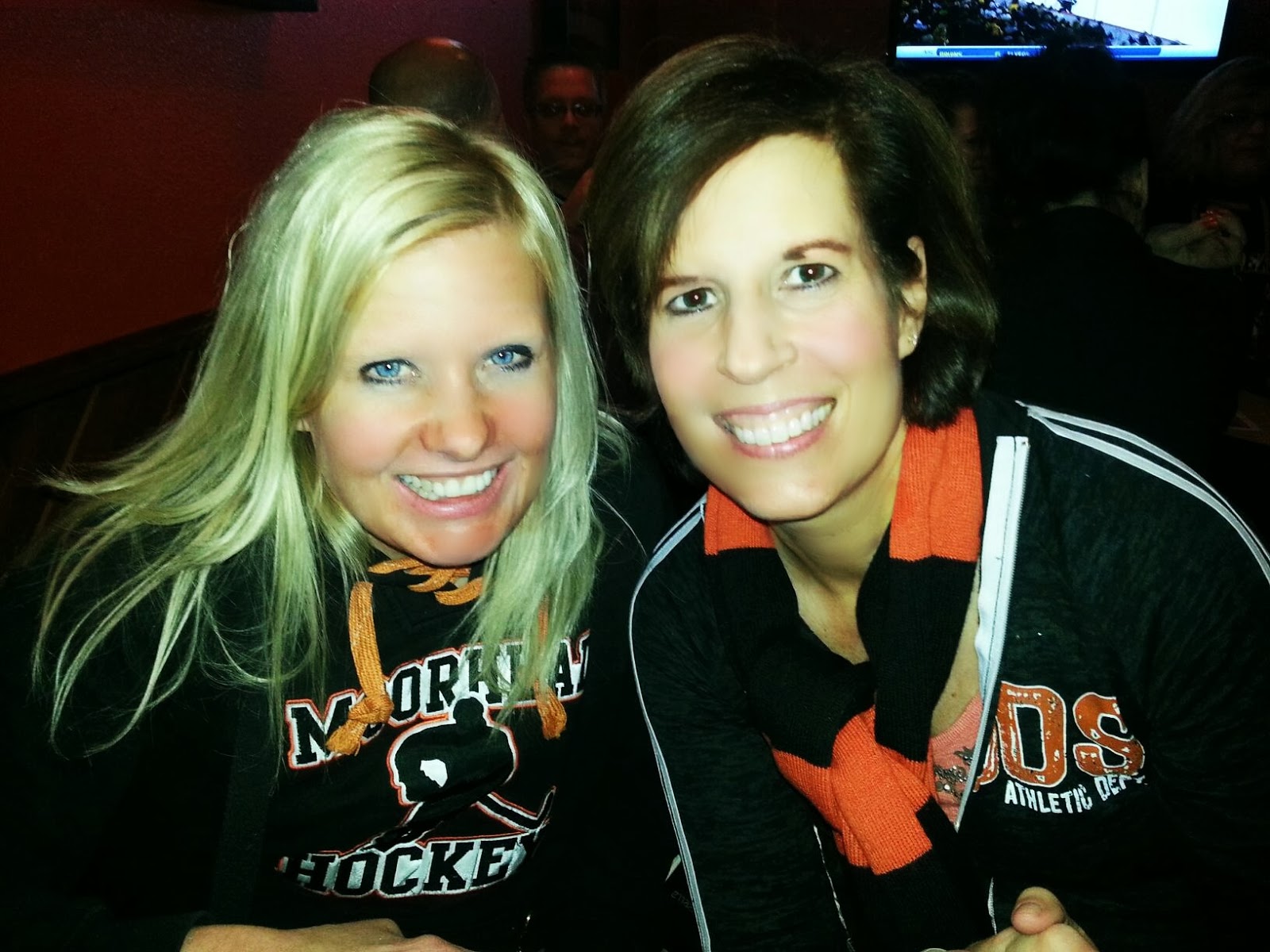 Sunday morning, after out final game and a bummer of a loss, we hit the road knowing we were about to run into blizzard conditions.  We had no idea how far we would make it before maybe having to stop and find a place to stay, but we were determined to head out.

This was our view most of the way back.  White.  Everywhere you look, the wind simply whipped the fallen snow into a frenzy of wispy, whirling, white, that clouded our vision and ability to see the sides of the roads. 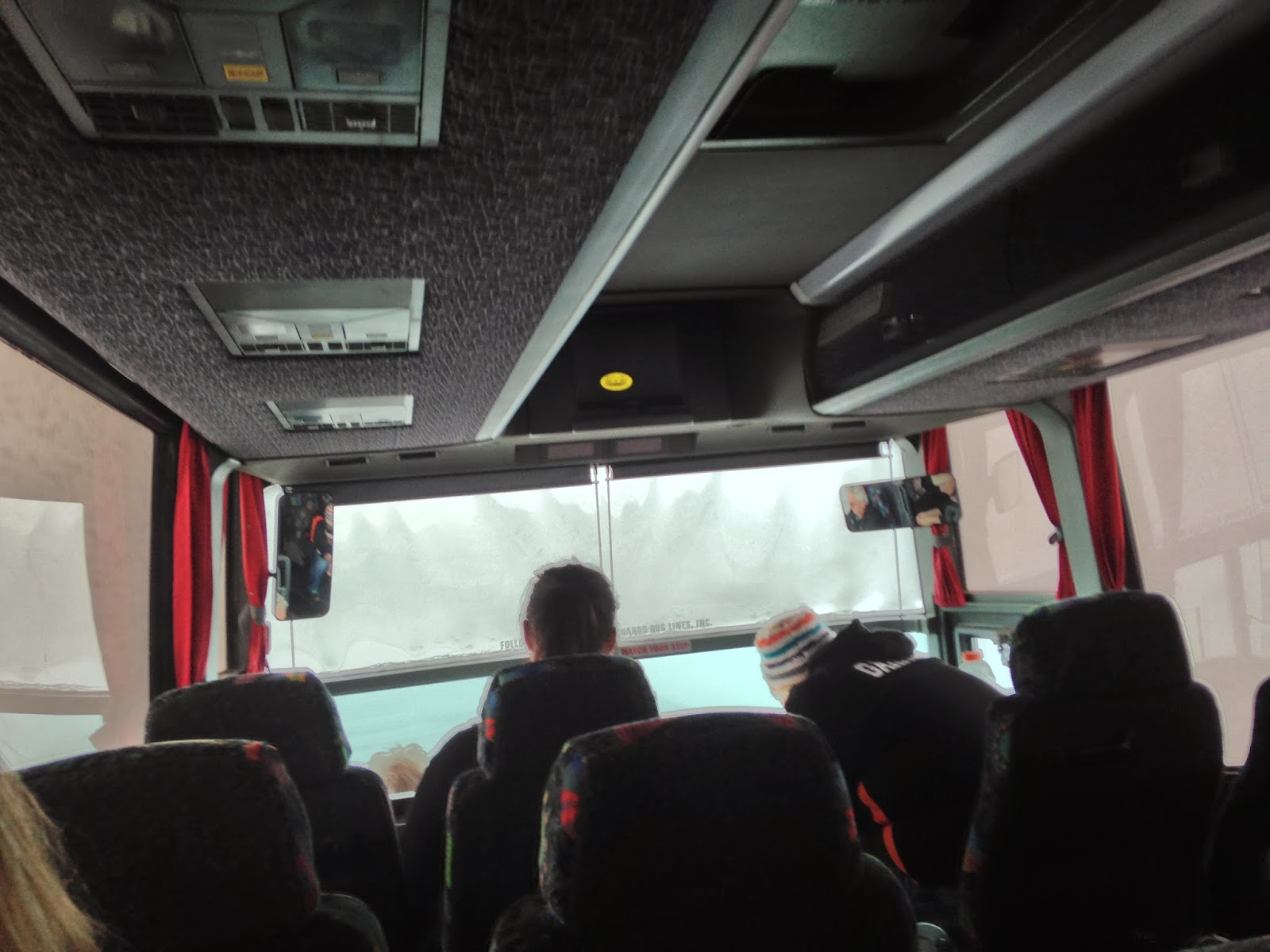 This was my view- and its not because the bus windows were dirty.  It was simply that white outside. 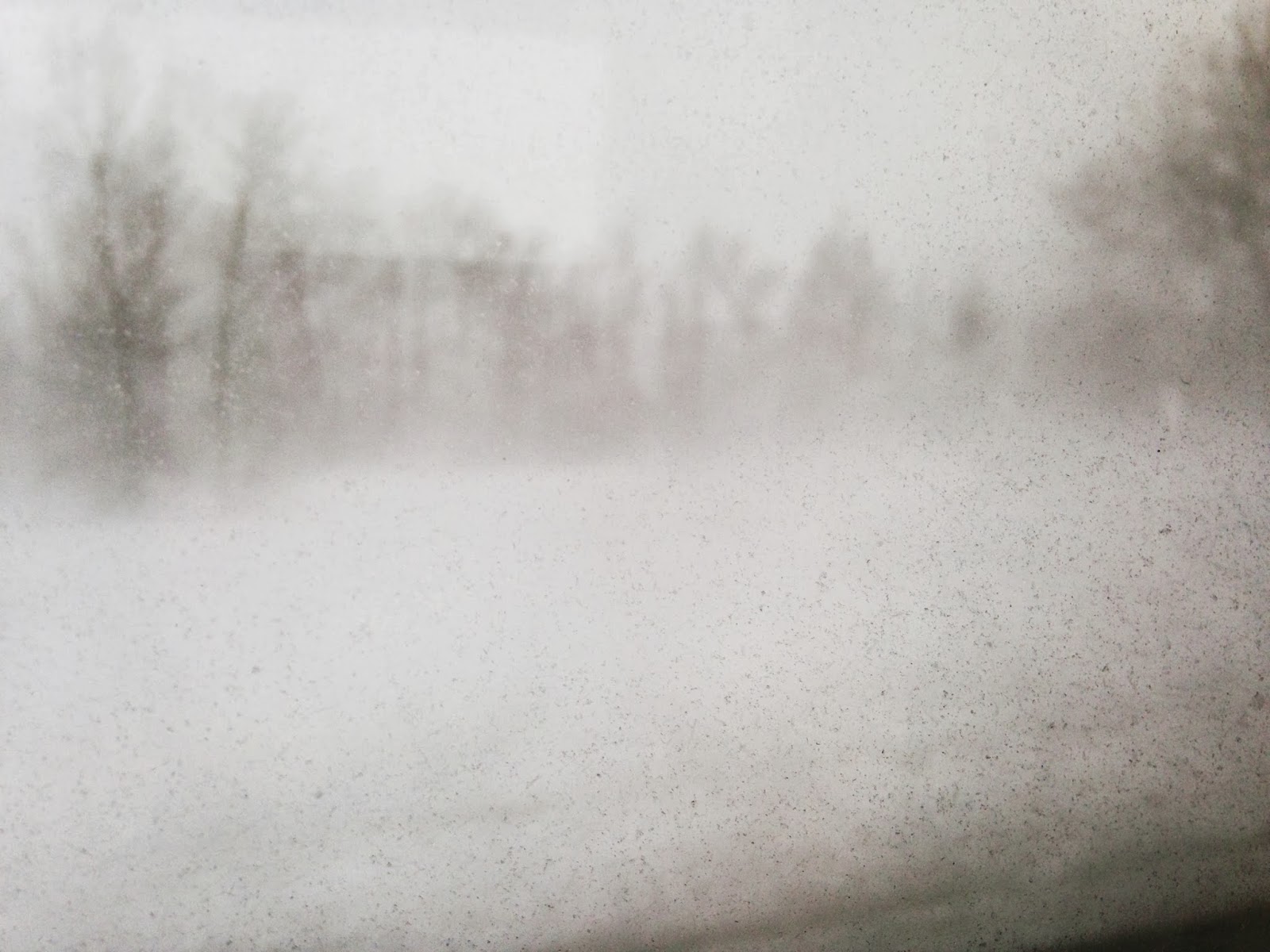 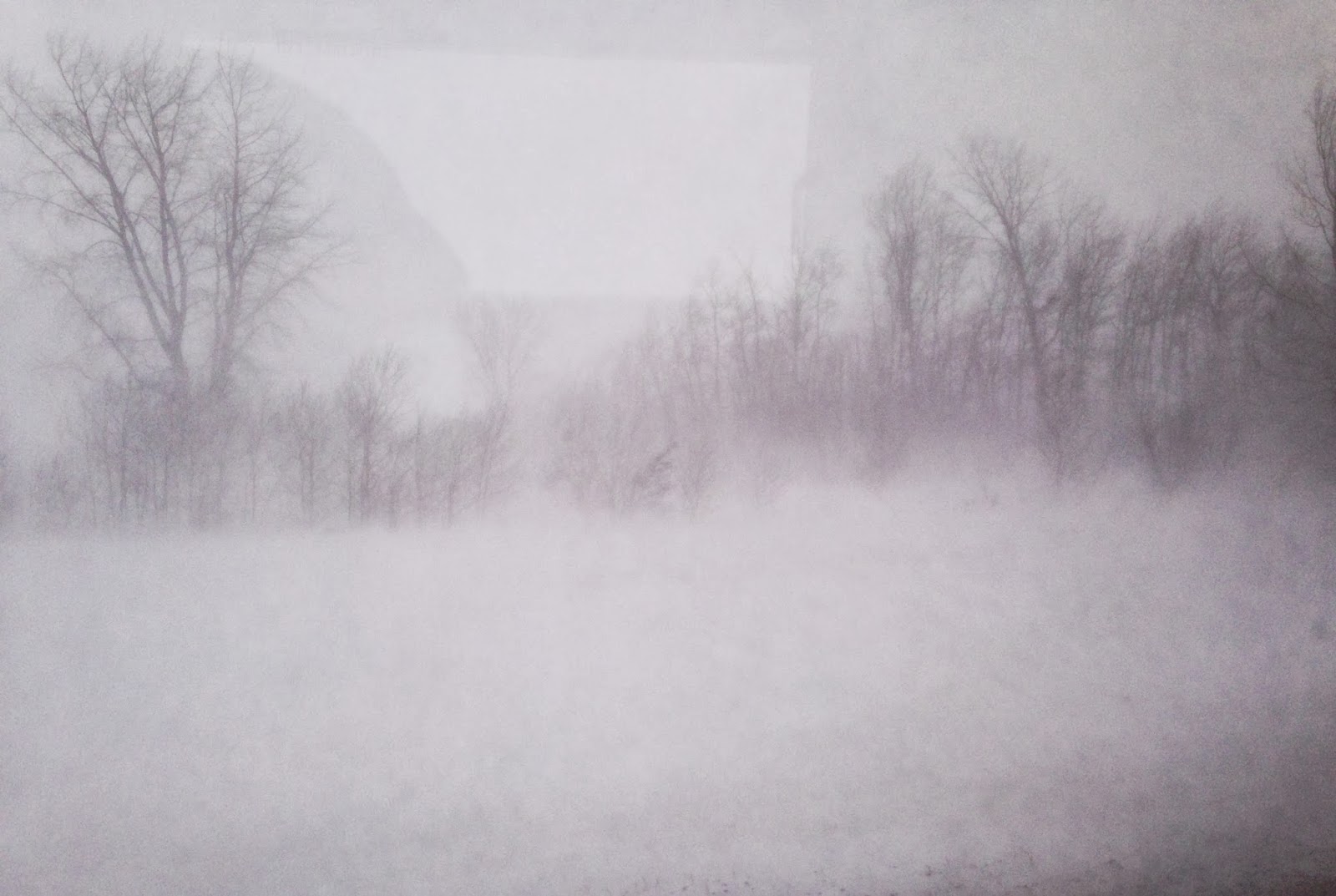 While every highway around us was officially closed, somehow we managed to get onto Highway 10 without running into a barrier of any kind.  We could actually see the road and the sun was eerily shining through all the haze and fog of the snow.  Had we been in a car or truck, I don't know that we could have made it through.  But the bus, and our driver, were unstoppable and we made it through a harrowing ride home safely. 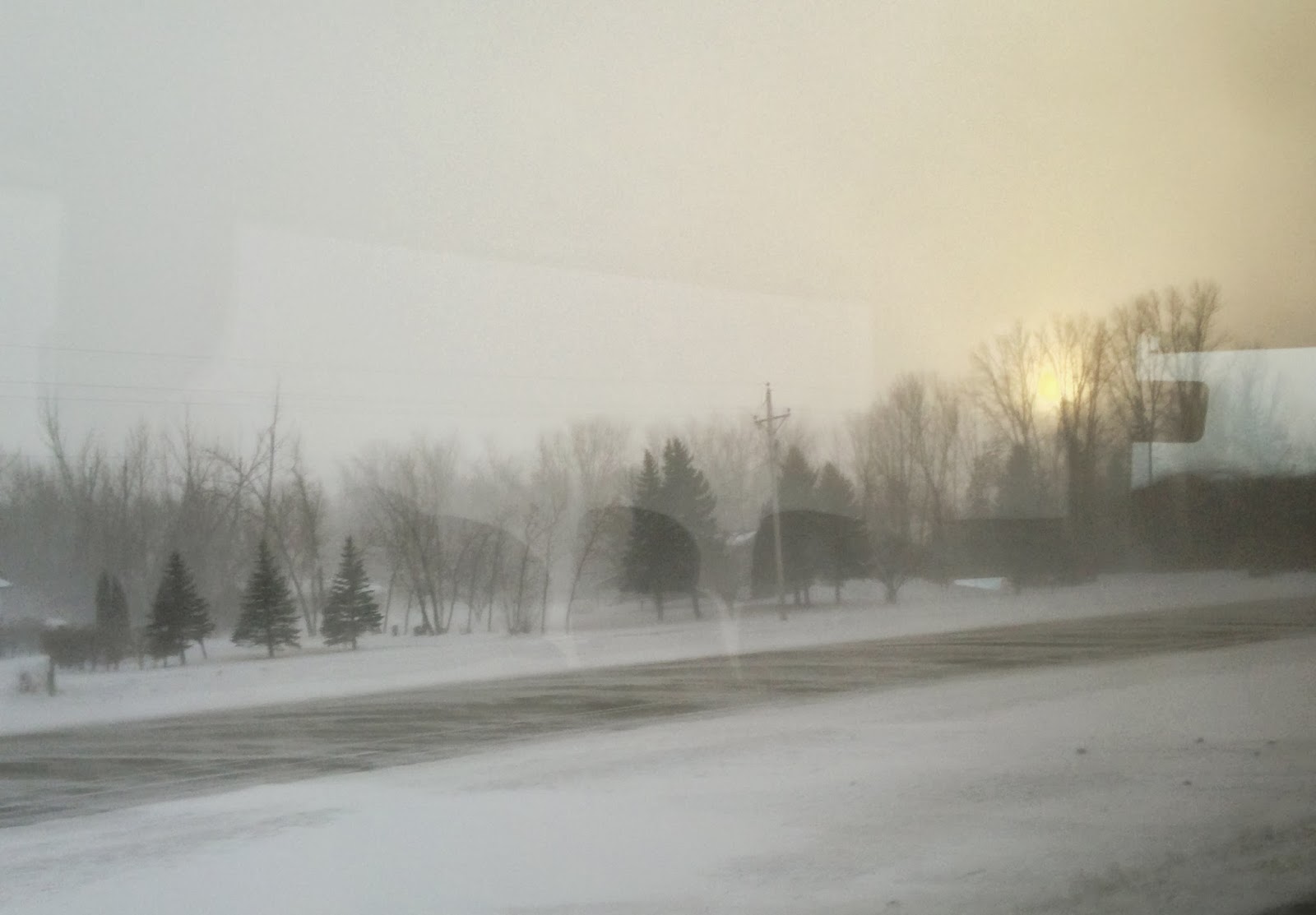 Colton and I wrapped in warm blankets and hunkered down in bed to watch tv and rest.  Our heat was turned down to 62, as there was a gas-line explosion in Canada that affected the supply of gas to our area.  We all need to conserve until they can get the supply back up to meet demand.  Its unfortunate the weather is so cold- well below zero- but we are bundling up as much as possible.

Mom seemed to have a good weekend.  I talked to her several times throughout.  She even managed to figure out how to go off the third floor , and go down the elevator to the main floor.  She got her mail, and walked around a bit.  She also loved having her sisters come visit, and one of my cousins.  She loves the company and the distraction to the monotony she feels.  I could hear in her voice that some energy has returned, and maybe even some strength.

Will look forward to visiting her soon.