There were several parts of the day today that were really amazing.  The first of which is the fact that it is October 8th and it was 85 degrees outside today.  I think that may be the first record that was broken today... more on that later.

I had little intention of going to the site this morning. But my sister-in-law called. Her company had some VIP credentials, and she could loan them to me for the afternoon. I was over there in 5 minutes flat. Its the one vantage point I haven't been able to get to. Missy, you rock. 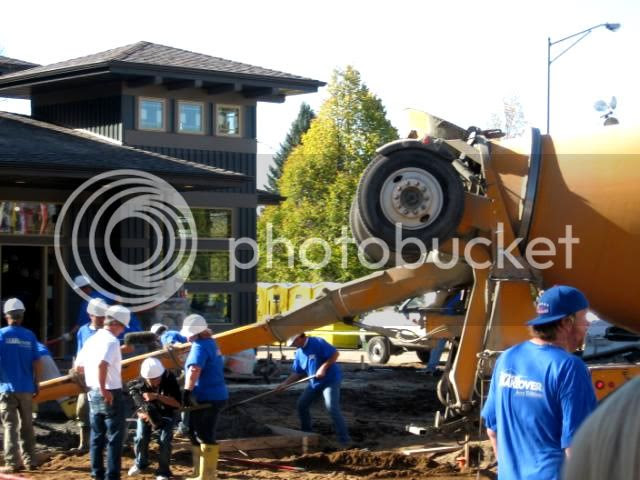 Finally, a side view of the house I normally can't see. 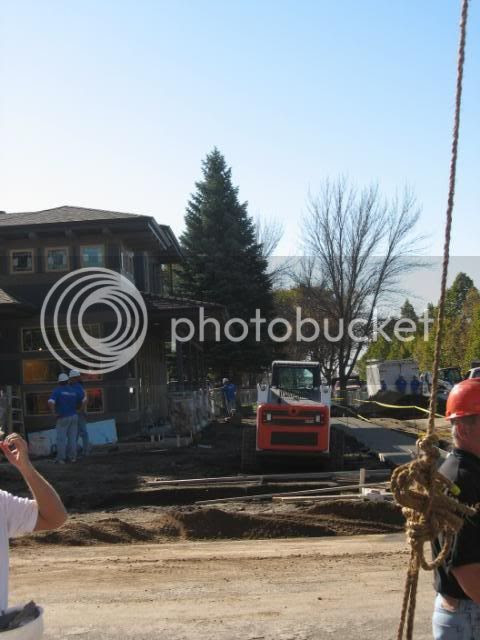 Not more than 5 minutes later, Paulie walked by having just gotten back from Washington DC on his secret mission. 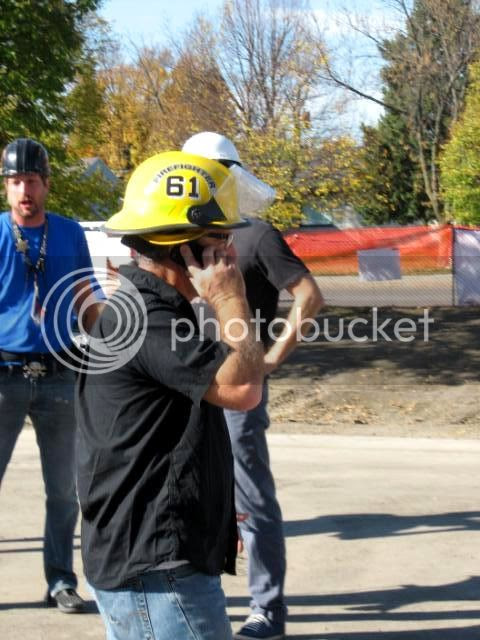 A few minutes more, and Ty came onto the site.  He took lots of pics with the crowd and then quickly left the site. 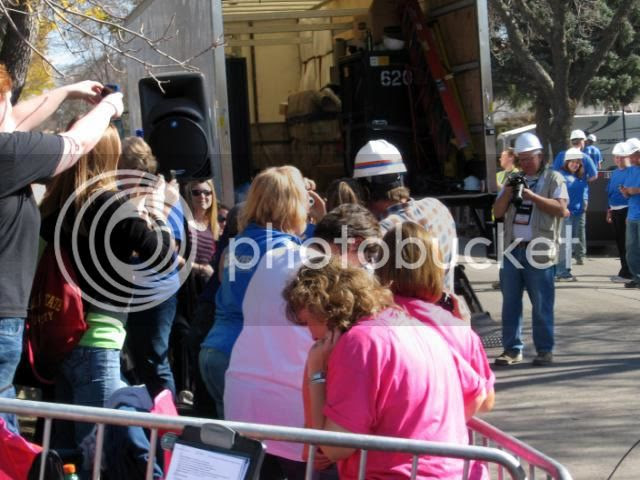 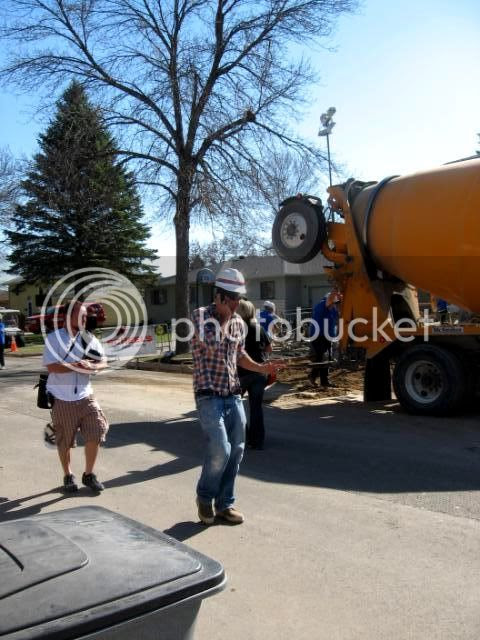 But Eduardo was still hanging around. 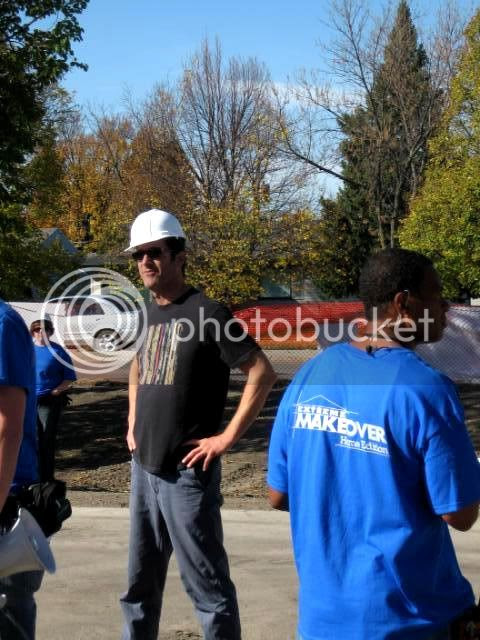 This is the VIP tent, and inside is catered food, cold beverages, couches, and even a chandelier.  Very chic. 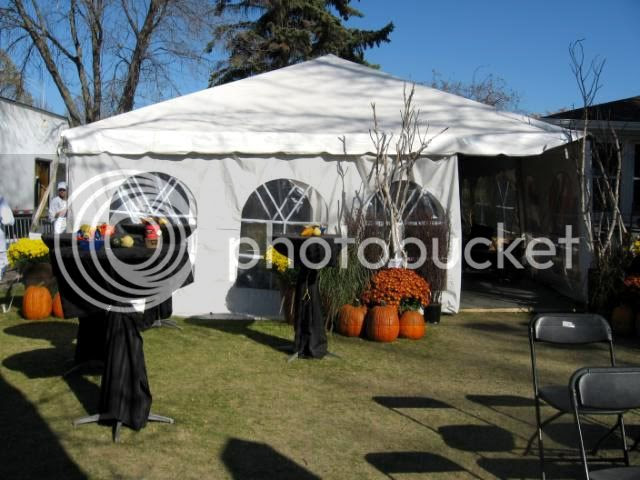 This is the adorable neighbor family who sold lemonade for a fundraiser for Garrett's family.  They donated all their proceeds from the sale.  I was their first customer and by the time I left, their bucket was overflowing with 10's and 20's... yea for the Grommeshs. 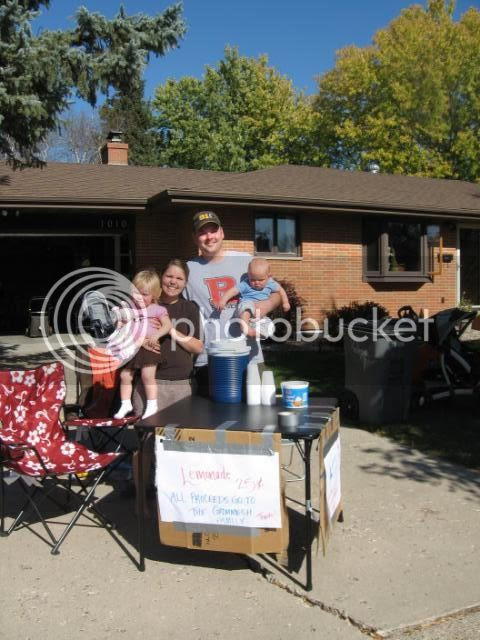 This was a class from the school where Garrett used to attend.  They were all waiting for an appearance of a cast member, but nobody was able to come back to the site... because 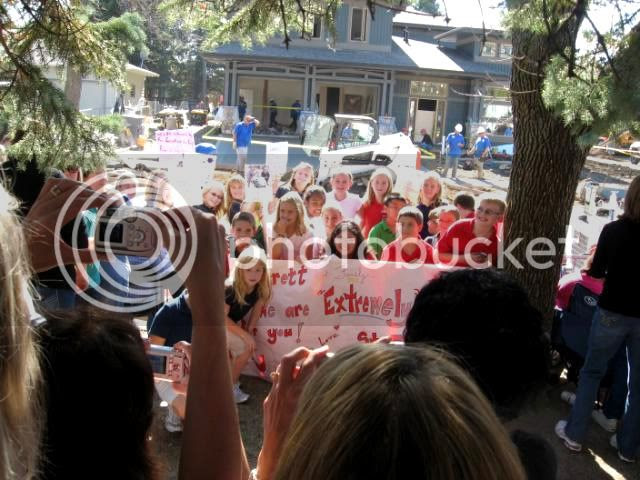 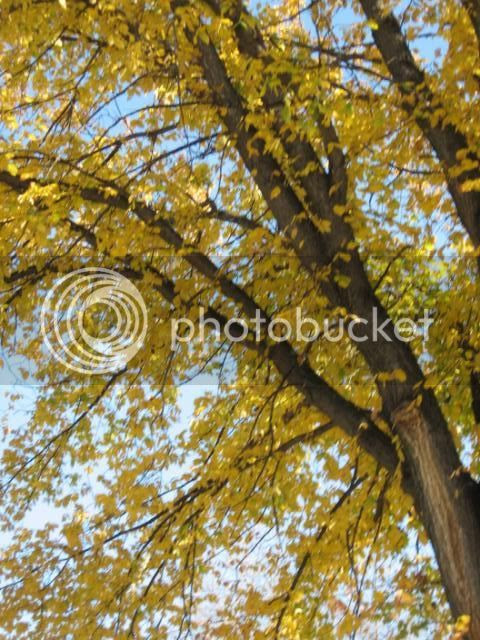 ... there was more than just a heat record attempted today... this afternoon, everyone headed here to the Miracle Field to attempt a Guinness World Record. 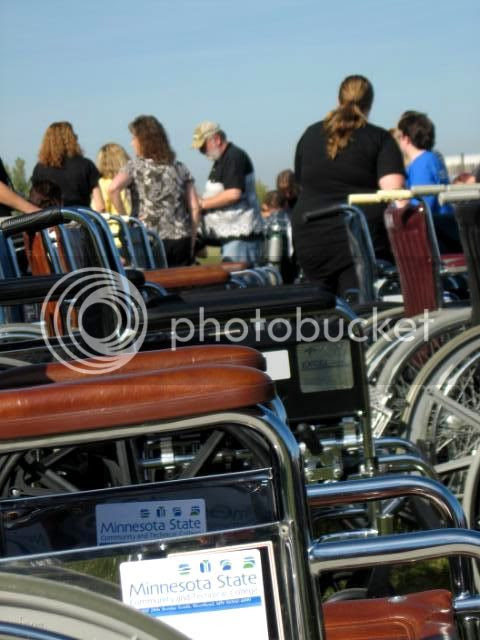 Paige went up here to direct everybody. 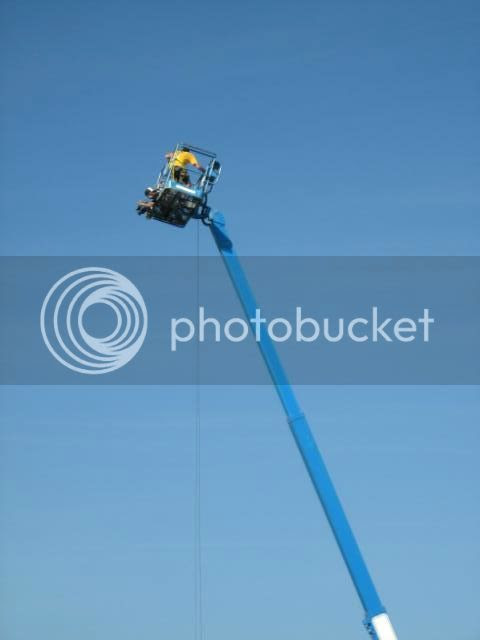 Every disabled and every able bodied person with a wheelchair was invited to attend. 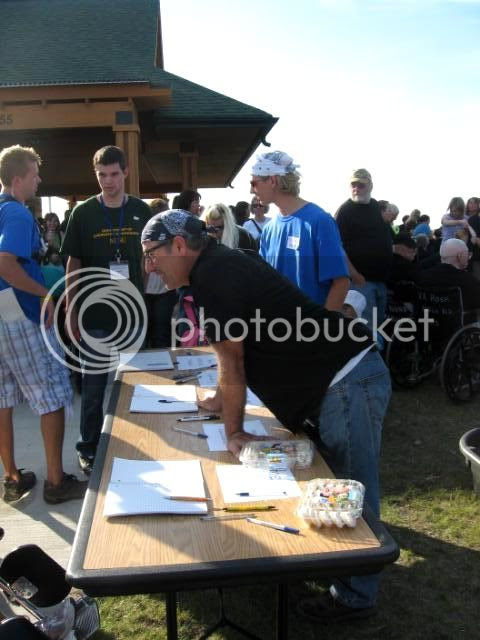 The hope was that 250-300 people would show up and form the world's largest wheelchair logo, which spelled out the word HOPE.  Hope is the name of the Grommesh's nonprofit organization for disabled kids which allows for them to be able to participate in all kinds of sports activities.  You by now are beginning to see why this family was chosen. 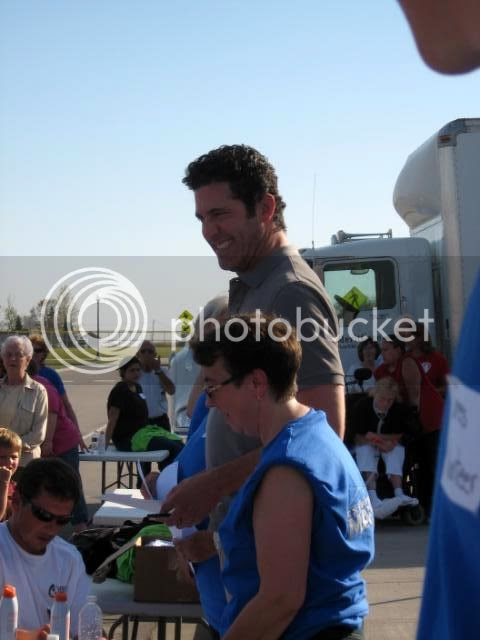 We arrived at 2:30 and I am not kidding you when I say the sun went down and we were still taping.  Ty, trying to learn his lines... 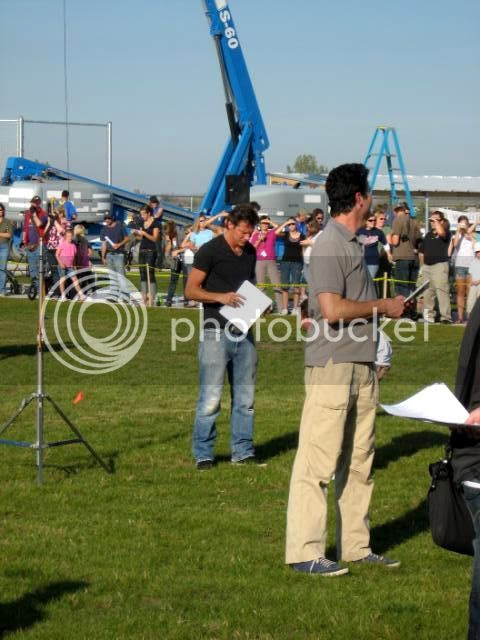 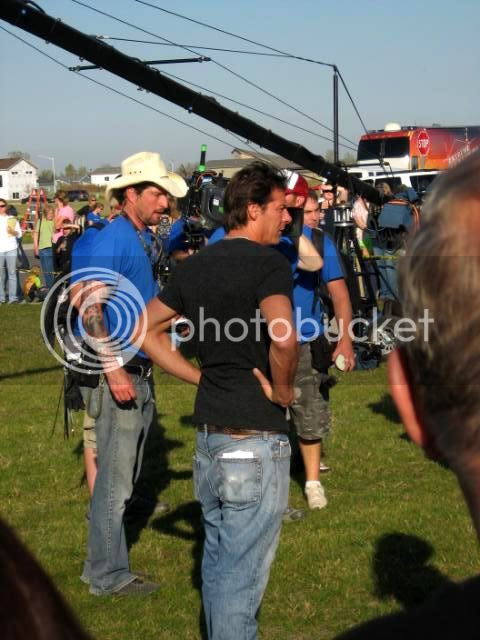 Ty laughing as he looks into the camera and calls them the "Garrett" family... oops. Take 4. 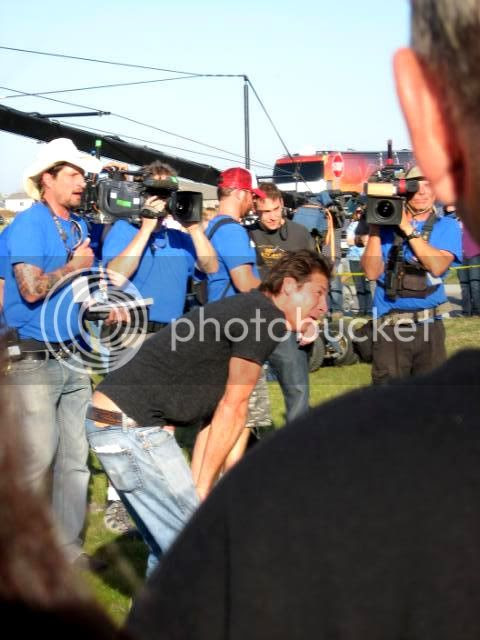 Everyone in a wheelchair lined up in their letter waiting for the "shot" to get taken. 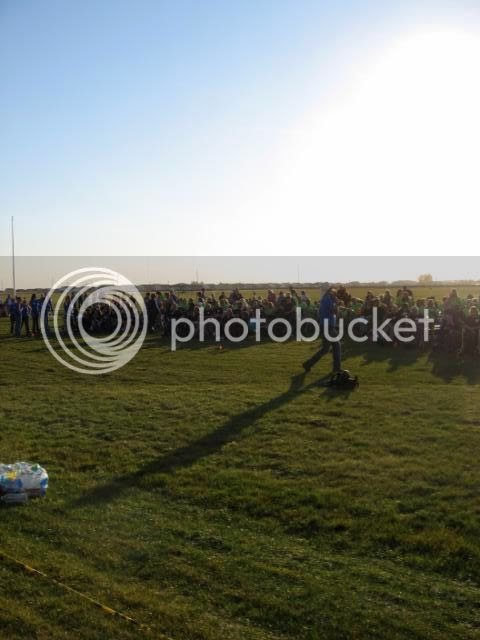 Paige and crew getting the right look for the shot. 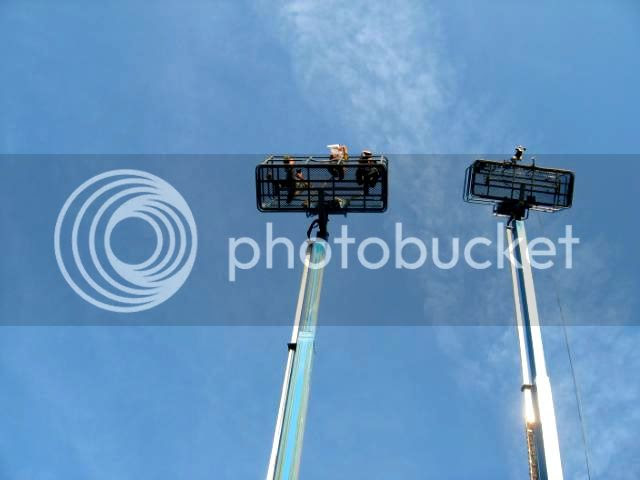 Crowd waiting for their cue for applause. 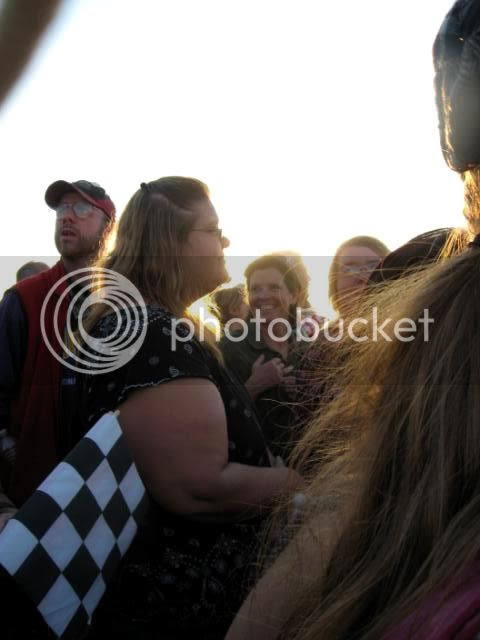 The official from Guinness... 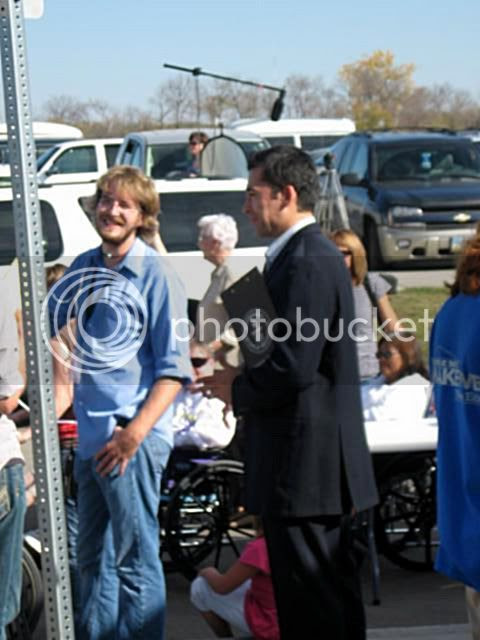 More shooting because the production crew told us this was "good light" for shooting so they were taking some extra shots. 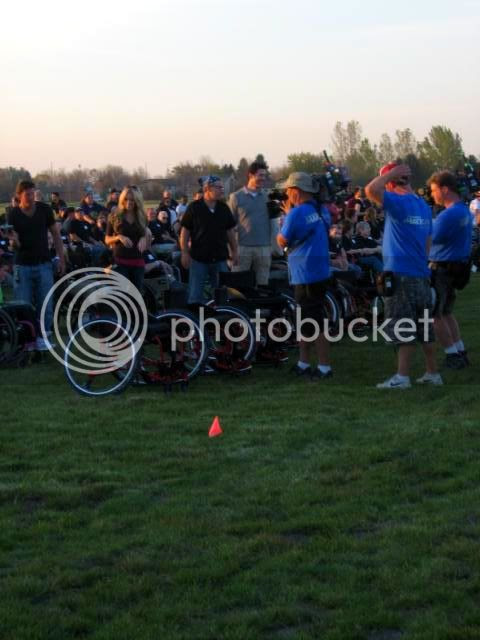 I didn't have a wide enough angle for you to fully see how many were on the field.  Its was an awesome sight to see. 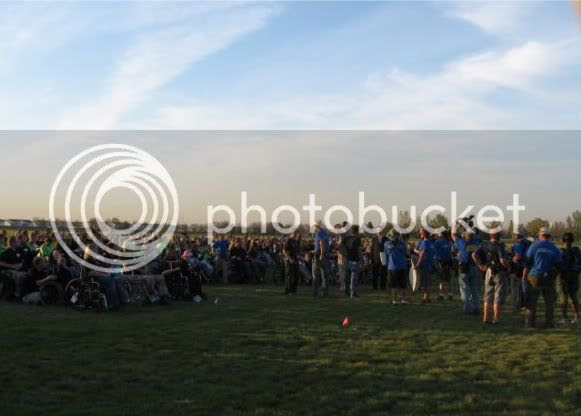 And just as we were wrapping up, the sun was going down and a formation of geese flew overhead, in the most fitting of endings on this day. 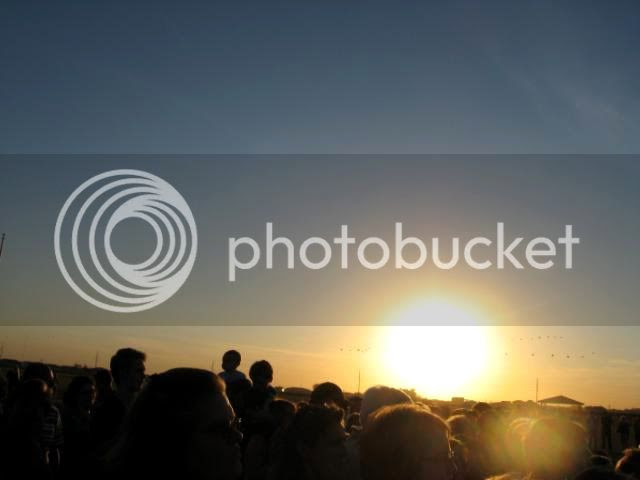 As for the Guinness World Record?  Oh yeah, we so got it!
Posted by Vicky at 8:23 PM