The signs were all there, just hard to read.  Colton was not his usual cheerful self.  He was moody and having a hard time finding something to do.  Second grade is "boring."  Playing with a friend - "boring." All the things he would normally like to do...  held no interest for him.  Friday after school he had been looking forward to a birthday party.  But he didn't want to go.  He had a stuffy nose and crawled in bed to watch tv.  This is not our Bubba.

We snuggled in bed and talked.  Repeatedly he shook his head no when I asked him about what he wanted to do for the weekend.  Finally, with tears in his eyes he said "what I used to get to do was go and play ball with Grandpa.  But now, I can't, and I just don't know what to do."

Oh my heart.  How had I missed that?  All of the times he'd go "play with Grandpa" instead of going to Nolan's football games, or hockey games.  The hours of cards, go fish, war, and made up games of ball.  They taped a stick onto a broken mirror and used it as a paddle to smack a plastic ball all around the house.  Or they got out the old battleship game and even though they rarely managed to sink a single ship, they played for hours.

Of course he missed his Grandpa.  I've just been too caught up in my own hurt to recognize his.

So we set out this weekend to help him through.  And sometimes, the exact thing you need rises up to meet you when you need it.   Colton was chosen to be the "Star Attraction" for the next school week.  We got busy this afternoon pouring over his baby book, searching for pictures of him and describing all of his likes and dislikes.  He likes hockey, baseball and golf.  He dislikes, eating meat, doing chores and bees.  He wants to be a famous baseball player when he grows up, and in his spare time he likes to play kickball.

This activity helped all of us put Colton at the center of our attention again. It was such a gift to revisit and celebrate his journey through life.  I began to see my sweet Bubba smile again.

But I wondered how this afternoon would go.  We needed to go and spend some more time at Grandpa's old house.  It was a beautiful sunny day.  We saw the butterfly as we rounded the corner going into the house.  He was a shy little bugger and didn't let me get too close with the camera without abruptly taking off.

Back and forth past the flowers we traversed, loading items into the truck.  Each time the butterfly floated nearby, as if hovering over us.  I'm not quite sure what made me say it, but at some point I said, "the way that butterfly is keeping a close on eye on us reminds me of Grandpa,  maybe its Grandpa supervising our work.  The boys giggled at the thought.  We sat on the step watching.  As we sat there talking about Grandpa's spirit, the oddest thing happened.  The butterfly began to fly up high over the house, then came swooping back down to the flowers.  In a flash it was off again zipping to the neighbor's yard, then back.  It would zoom one way, then practically dive bomb us as it dove towards our heads.  Colton could hardly contain himself, "look he said, Grandpa is dancing for us."  Indeed, that little butterfly was putting on a show for us all.
It finally came to rest back on the flowers again.  This time it let all of us get very close to it and I got several shots of the butterfly. 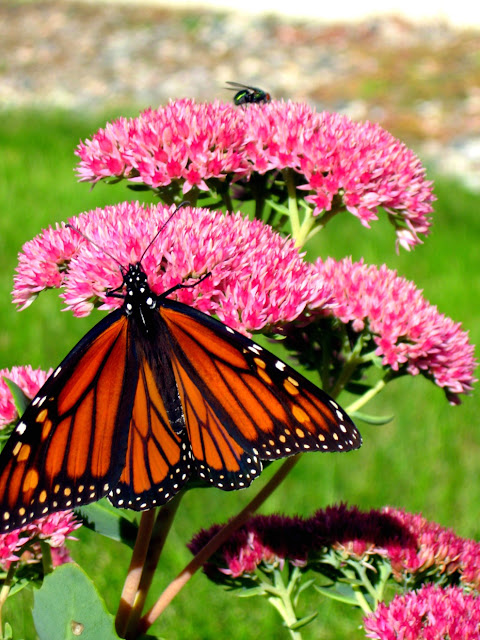 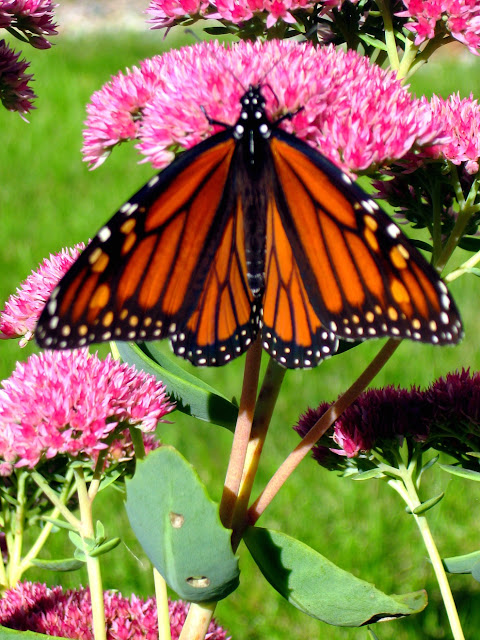 It was such a simple thing.  Maybe it was just a wayward Monarch butterfly.  Or maybe it was the spirit of a grandfather coming out to play with his grandchildren.
Either way, that butterfly carried our sorrows away, while wafting joy and sunshine down to the earth from on high, for a few brief moments.