Of mice and ... shrieking women

I laughed last week when Rick said he thought he heard a scratching noise coming from the inside of the hall closet and was looking for a mouse in the wee hours of the morning.  I was convinced it was the tassels on the corn scraping against the window, and with a smirk on my face contentedly went back to bed.


But there I was, in the laundry room folding clothes to put in our suitcase.  I was standing with my feet under the ledge of the counter I use to fold my clothes on, and something moved as I took a step back.  In a flash I saw two beady eyes and saw a blur of fur as I felt it go running across, BOTH my BARE feet...  and I screamed.  And screamed.  And jumped on the counter shrieking for Colton to bring me the phone.

I called my husband... and he LAUGHED.  Then told me he'd be home AFTER lunch to take a look.  No way could I sit there for two hours with that monstrous hairy thing on the loose.  Did I mention how ginourmous that thing was?  HUGE, I tell ya.

So next I texted a friend whose hubby was home.  He graciously came and searched the basement, brought some traps, and provided me with enough sanity to leave my perch on the counter.

But no way in heck would I go back downstairs.  I had the biggest case of the heebie jeebies I have ever had.  Well Nolan was not afraid and went and got the suitcase, and some clothes to pack for the weekend... but then SHRIEKING began once again.  Poor Nolan, he said he was fine till part of the floor MOVED.  Thankfully, hubby arrived shortly thereafter.  The mouse hunt was on.

I heard toys rattling, furnitures moving, the lining on the couch ripping as no object was left unsearched.  After another sighting of the beast, it was finally contained in the office.   After nearly a day of wreaking havoc on the house, the big hairy mouse was trapped in a live-trap, and ushered outside a couple of blocks away, to his new home in the field where he belongs.


Would you like to see the little ginormous furry mouse? If you squint your eyes and look in the left hand corner of the wall you can see the gray blob with the c of a tail sticking out.  Ew, ew, yuck.

I think I had the bags packed in 2.7 minutes after that and we hit the road for our Labor Day Weekend adventure.  But just to be on the safe side, we left 3 traps in the basement... thankfully they were empty when we returned.  But the closet with the scratching?  I won't be going near it anytime soon. 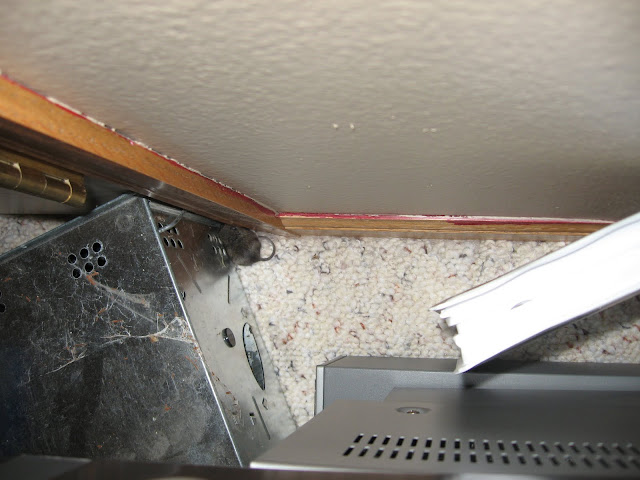