What you don't see... and what I am thankful for. 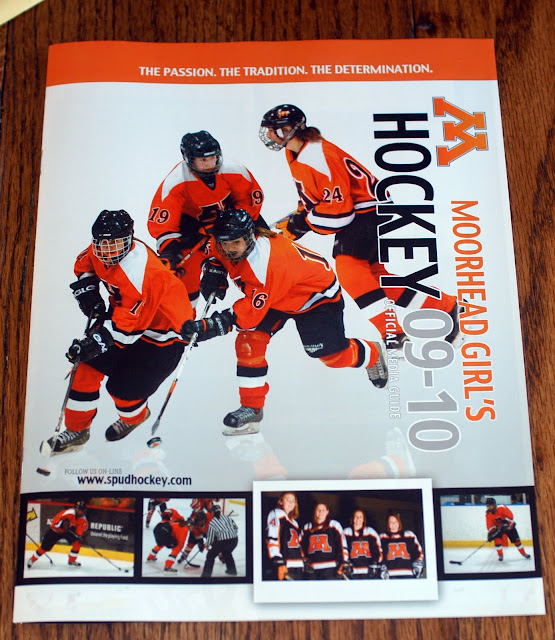 My husband Rick produced a beautiful game program for the Moorhead Spuds Girl's hockey team. I get to say that, mostly because it happens to be true.

He took all the pictures, laid it all out and worked with his graphic designer to achieve the look the girl's desired. He made many, many, revisions. Yet the whole production of the program took less than a couple of weeks.

What you don't see, is how it consumes his time night and day. What he doesn't tell you, is that he leaves our house at 11:30 pm Monday night and drives through the night to his production plant. He arrives at 5:30 am, loads the programs into the truck and drives it all the way back home. He gets home in time to go to hockey practice with the boys.

Then he delivers the game program to the girl's first home hockey game. Its youth night. There is food, autographs by the girl's hockey players, and fun. A win is recorded in the scorebook. Nolan celebrates his unique approach to autographs, having the girls write on his arms. And for his favorite player? Kendall gets to write across his forehead... (sorry Jordy, he may have traded you in for the next Christian hockey player on the local scene.)

The pictures tell the story well. Its what we DO see.

And while everyone else is at the Sports Center? I am at a meeting at the other rink. For hockey. Because what you don't see, are all the hours spent behind the scene figuring out our way in this new hockey year. Many of us, filling out forms, making rosters, coming up with practice drills, coordinating the intricacies of travel teams. (And not blogging... clearly, I've not been doing that.)

I've also been watching little L this week. She is learning to walk. She hardly crawled before she came here at the end of September. Now she is standing alone and trying to figure out how to move a foot in such a way as to not topple over. What we don't see, is that day by day, hour by hour really, she falls over and over again. But each time she gets up quicker. Each time she becomes stronger. She figures out how to plant her feet and slowly she realizes she can balance alone for a second, and then minutes at a time. She actually works on walking most of her waking hours. But we don't tend to see that. I'm fixing food, or running to grab something or playing princess with E... and L is learning to walk the whole time... we just don't see it.

I've been trying to figure out what I am thankful for this year. I know its all the things you would expect me to say. My family, friends, our good health, and many other blessings. But this Thanksgiving, I'm also giving thanks for all the things we don't see. The uncelebrated moments. The moments that happen before the camera goes click. The moments we don't blog about. For some reason, I can't quite explain, I've been drawn to these moments lately and I've decided to give thanks for them too.

And what are you grateful for this year?
Posted by Vicky at 8:22 PM