Scans and surgery and Dream. State. 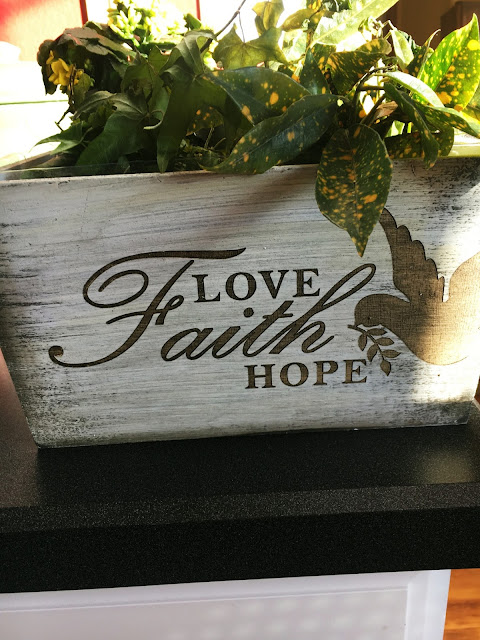 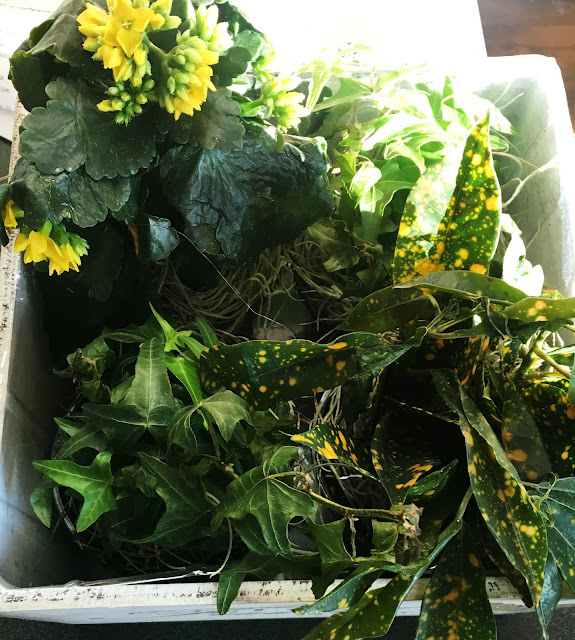 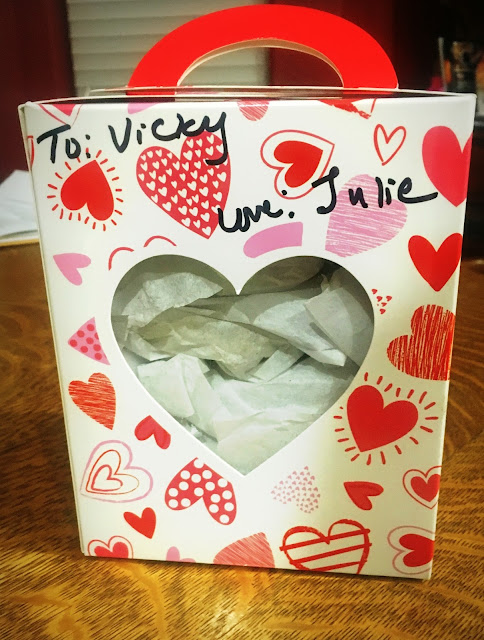 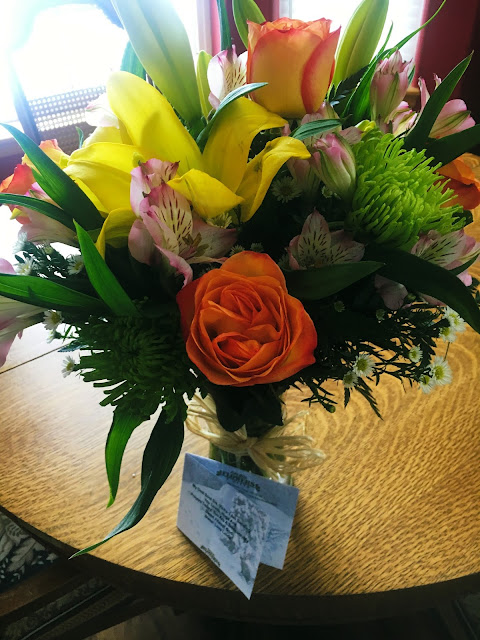 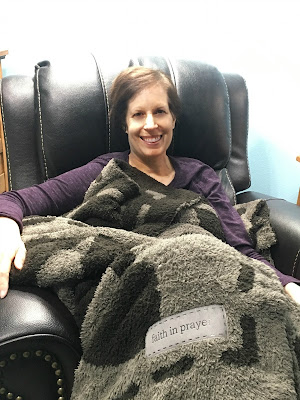 It's days after I had my stent replaced and that is me in the photo above, late the first night.  I was actually allowed to go home from the hospital by early afternoon.  Around every corner that day, it seemed a small gift awaited me.

I've learned through time, to try and not have too many expectations.  I had been told to arrive at 6 am and that surgery would be at 8 am.  I had been barely settled into my pre-surgery room when Dr. Williams arrived to see me.  He had already concluded his first surgery of the day and it was only a little after 7.  He assured me I'd be going down soon.  We had very little to say as this was my 4th procedure by him and we're pretty well versed in how things go.  He was full of an understated ease, that mimicked my own calm at the time.  While everything is truly very straightforward, you still know you're presenting yourself for something quite serious.  I have a large mass in the area where the stent goes, and it's proper placement is key to helping my bladder and kidney work smoothly together.  But we don't elaborate those details.  He simply says he'll see me in a bit and off he goes.

The operating rooms are on the second floor, just a short trip down through the elevator and down some long hall-ways.  Somehow I was so relaxed I didn't need any pre-meds to calm my nerves before going to the OR.  I was chatty with everyone as they began getting me ready for my procedure.  But as soon as a little "versed cocktail," was added to my port, I knew the "party" was about to begin.  The last little bit I recall is that they were going to cancel my need to go to the PACU unit since I was such a light weight and wouldn't require high doses of drugs.   I would go directly back to my room after the procedure if it went well.

Sure enough, an hour or so later I awoke to being back in a regular hospital room.  At the mention of food I agreed to some jelly toast and was soon sipping some coffee and munching away.  Rick had managed to go down to the cafeteria and was surprised to receive a call that I was back in my room just as he was getting his food.  He finished eating and came back to sit with me.  He shared that Dr. Williams was pleased with how the procedure went and also happy with how the stent looked when he took the old one out.  He also shared with Rick that he feels bad that I have such difficulties to face, and yet he admires how I remain so positive. Based on everything being in such good shape Dr. Williams has decided to move me to a 4 month rotation so that I can have more time in between procedures as long as I continue to do well.

It wasn't long and I managed to get up and walk on my own.  As soon as that was checked off the list, I was told I could dress and prepare to go home!  At every juncture that day, it went far more smoothly than I had ever experienced.  I felt at ease for so much of it, despite some discomfort and side effects of the anesthesia, I still felt it was all manageable.  At home I managed to sit with my phone and finally see the outpouring of love and prayers on facebook from so many friends and family.  I was thoroughly touched and moved beyond words.  The multitude of prayers and well wishes truly were answered and blessed me so.  How else can you explain how well it all went?  My tiniest concerns were met and taken care of- truly I was in the best hands.  His hands.

My scan results even showed me the stent the week before last.  Its such a tiny piece, but its surrounded by a mass of breast cancer tumors in my pelvic region.  Fortunately?  The mass was actually less pronounced in the most recent scan, and overall looked smaller.  In fact, the entire scan showed less prominence of cancer in many areas.  Dr. Panwalkar was pleasantly surprised at how good the scan looked in most areas- a couple of areas were the same and some a bit worse maybe, but overall good.  He hesitated in how we should proceed with treatment, but ultimately decided that since I was handling the side effects pretty well, we'd stick with the current regimen.  So for the next 3 months I will continue on with the combination of 4 drugs infused every 3 weeks.  I'll continue to do 3 booster shots and I promised Dr. P I'd call if I had the slightest change in how I was feeling. He had looked so serious when he arrived at our appointment, but was more cheerful and pleased overall, when he left that day.

I've managed a few photos of some of the blessings that have come our way.  Beautiful plants with just the right words displayed on the crate- so uplifting the day it arrived.  Plus the box of cookies that came all the way from Georgia!  They were delicious and I was so touched someone took the time to mail them off to me.  The flowers that arrived one day,  gave me such a lift.  I remember how bright the sunshine was and how "springy" it felt that day.  The gift of the blanket just topped everything off.

I was groggy and recovering from surgery, and the best possible way to rest is when you have a blanket made that is called "covered in prayer," by a woman who was a survivor of cancer herself.  I'm definitely living proof, that blankets can cover our physical needs, but it can also help cover our emotional and spiritual needs as well.  A few days later another beautiful hand knit blanket arrived- ti is equally as warm, and done in some bright beautiful spring colors, I love wrapping in it early in the morning.  Thank you to all who have blessed me in so many ways.  It helps me feel like there is a continued purpose to my life, and that is the best gift of all.

I've been reading the book, "Option B, Facing Adversity, Building Resilience, and Finding Joy," by Sheryl Sandberg and Adam Grant.  She says "resilience comes from deep within us and from support outside us.  It comes from gratitude for what's good in our lives and from leaning in to the suck.  It comes from analyzing how we process grief and from simply accepting that grief.  Sometimes we have less control than we think.  Other times we have more.  But when life pulls you under, you can kick against the bottom, break the surface, and breathe again."

This is how I live my days, with the support of all of you.  I'm kicking and breaking the surface, and breathing yet again.  Thanks for coming along with me!

The first episode of the show Dream. State. aired last week.  We had decided to watch as a family and as the boys arrived home, the show began.  We were all glued to the television when suddenly it stopped after just a minute or so had aired!  And it didn't come back.  We were so perplexed and disappointed.  But luckily, Nolan discovered a link for the episode on Youtube and we were able to stream it to our tv.  Wow!  The first episode was so well done!  We watched twice that night, pausing and remembering as we went.  There were so many special moments with Nolan in it throughout the episode- over a dozen times we saw him or one of his goals, or an interview he had done with his friend Ethan, when they were really young- so many great moments.

Here is a link to the first episode on Youtube:  Dream. State.

The second episode is scheduled to run on FSN tonight, right after the Wild game.  We have been told our story will not be in the second episode, but has been moved to the 4th episode to run at a future time.  All of the shows should be able to be viewed on Youtube after they've aired on tv, if you don't have access to the tv show.