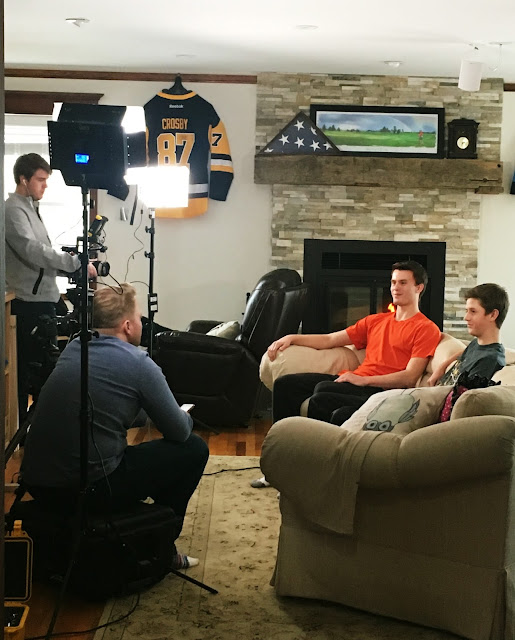 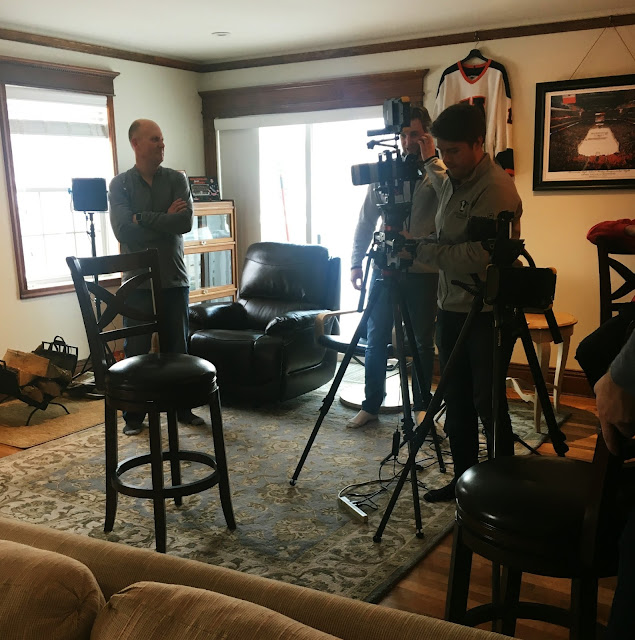 Dream. State.  It's the name of the television show that is following our boy's hockey team this year.  We've seen their production crew both on and off the ice at the Sports Center.  One of the young men met with Rick to talk about using some of his photos from over the years as part of the show.

But then he received another email request.  Would we consider doing some interviews with the crew about our family story?  They expressed not only talking to me about my journey with cancer, but also wanted to talk to our boys, and to Rick.

Through a series of messages we picked a Sunday for the crew to come to our house.  The boys had been traveling for hockey and had arrived home late the day before.  So we let them sleep in a bit and didn't get started until 11 am.   We truly didn't know what to expect.  We anticipated it'd last an hour or so.

I had just had chemo the Tuesday before, and was just starting to feel better.  I prayed long and hard that I could feel up to the task of being on camera and sound ok in the interview I would do with them.  I was fully prepared to live up to the honor of sharing my humble story once again.  I felt like I had so much to give.  I'm always awe-struck that He seems to find a way to help me live with purpose, by sending these huge opportunities to me time and again.  As confining as it can become to physically live within your 4 walls, its amazing how much your spirit can grow past those very walls.  I was ready to give...

But I had no idea just how much I'd receive instead.

The crew spent a good hour or so just setting up all of their gear.  I forget how many cameras there were.  At least 3 were running most of the time.  And their lights were strewn about.  Each one of us was given a microphone that we taped to ourselves.  Then the questions began. 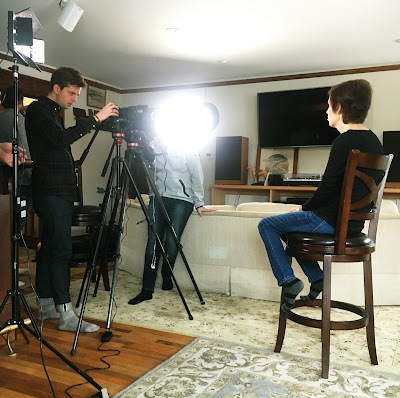 I got to go first, with the other 3 watching on.  I know we talked for almost an hour.  But the focus of our talk?  Certainly wasn't about cancer.  Its funny how much hockey has been more pervasive in our every day lives, and how easy it was to lead the talks back to hockey throughout everything.  Its so clear that hockey is more than a game, more than a season- its definitely a way of life that is lived both on and off the ice.

And so many of the people that you started this journey with, are the very people that are still present in your life all these years later.  I was both drained and exhausted when my part was finished.  But I was filled up with joy and good memories, and pure satisfaction of just how fully we've lived our moments throughout all of these years.  But that's when the biggest gift started to unfold before my eyes.  The boys were starting their interviews.  And part of what they were asked to share was about how Rick and I had contributed to their hockey life.  I won't forget the magnitude of those moments.  The raw emotion they spoke with.  The words that every parent longs to hear.  We laughed and laughed at all the fun stories the boys remembered.  And relished the good memories that prevail to this day.  I know parts of this could be used for the show.  While the tears streamed as I stood just outside the doorway listening in, the gift of hearing my boys speak these words was simply priceless.

The young men then sat down with all of us and we continued to share stories with them.  As they slowly began to wrap up and pack their things, I glanced at the clock.  They'd been with us for 6 hours!  For 6 hours we had talked non-stop about our hockey life, and we felt like we barely scratched the surface.  We re-told the past 15 years of our life, and it was such an honor to have it all captured on camera. The whole afternoon was a wonderful culmination of the journey we've been on ever since the boys were in diapers.

I was literally spent for days to come.  I have no idea how I got through the taping as well as I did.  Its clear that He saw me through.  Those prayers were answered.  The grace rained down in abundance on me that day.

The show, Dream. State., will air February 13th on Fox Sports North.  Its a 6 week, 6 episode show that follows the Moorhead boy's hockey team.  We were told our family footage would be aired on the second episode.  We can't wait to see it!

A lot has been happening as far as my cancer treatment goes.  Dr. Panwalkar has been very busy in researching and finding another treatment for me, despite the fact I haven't physically seen him in awhile.  I've gone in twice to fill out paperwork to help me secure access to a new drug should I need it.  I've both had to qualify for the drug medically, and financially so its been no easy process.

I will have a PET scan on Monday, and see Dr. Panwalkar on Tuesday of next week.   If my scan is stable or shows tumors shrinking I'll just stay on my current treatment.  If I show progression than I would start taking a pill called Keytruda.  You may see advertisements for it on tv.  It's a new immunotherapy drug on the market that shows promise in heavily treated patients like myself.  I'm so grateful to have qualified to have this drug when the time comes.

The very next week, on Valentine's Day I will have another stent replacement surgery.  I have so much happening over the course of the next two weeks.  I will be at the clinic or hospital nearly every day those two weeks.  Between all the booster shots, the pre-surgery labs and exams, infusion and PET scan- I'll be stretched to handle it all.

So I'm still leaning in to all the uncertain and scary times ahead.  Each day is different.  Will I have break through pain, or not?  Will I need the wheelchair or can I walk?  Can I keep my oxygen saturation high enough, or not?  Will I be nauseous?  Tired?  Weak?  Worried?  Likely all of the above.

Still- my days fill in between with support in all kinds of ways.  Meals arrive on a weekly basis.  Treats and goodies are left by our front door.  Cards and letters with encouragement arrive all the time.  I feel blessed despite the hard things we continue to face daily.

So to get through the next couple of weeks, I'm turning to the best coping method I know.  Taking myself out of the center of it all as much as I can.  I'd love to focus on you!  Will you share your prayer request with me for Monday?  How can I pray for you?  Please leave your requests in the comments below and I'll make a list to carry with me the next couple of weeks.