It's already been a full week, since Nolan left.

I try to think back to when the dream began?  Was he 3, 5 or 6 maybe?  He loved the NHL hockey player, Sidney Crosby.  He read about Crosby's hockey history, and wrote reports about him for school.  We turned his entire bedroom into a "Penguins," theme with grey walls, black bedding and decals everywhere.

He named our dog, "Crosby," for Pete's sake.  Could we be any more obsessed?

Imagine his sheer delight, to discover, "Sid the kid," had gone to school in Minnesota.  Sidney had attended school, and played hockey at Shattuck- St. Mary's in Faribault, Minnesota.

Flash forward all these years, and the list of NHL players that Nolan admires has grown more diverse.  So many qualities, in so many of them, to look up to.  But his admiration for Sid, has never waned.

So when fate and opportunity knocked on our door?  How could we not help achieve a childhood dream for our son? 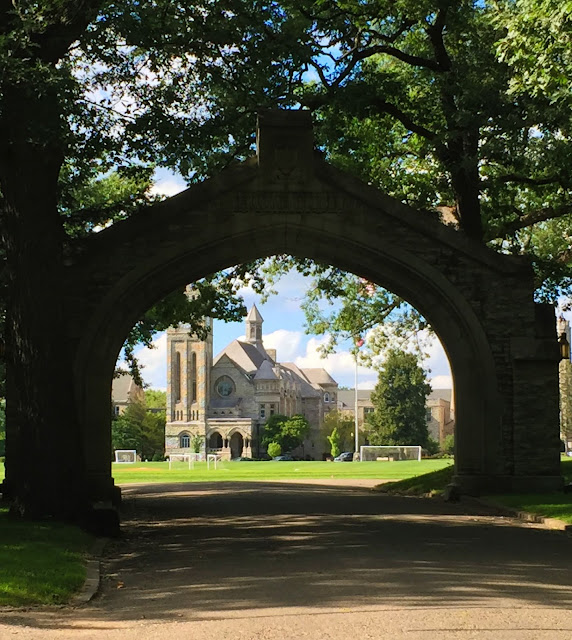 Earlier this spring, Nolan was accepted into a hockey camp at Shattuck, for two weeks.  Last Sunday, the long awaited day arrived.  Rick would drive Nolan the 5 hours to his hockey camp.

Tears streamed all morning for me.  Nolan has never left before.  Never been gone for longer than a sleepover, somewhere close by.  He tried to reassure me.  "Mom, it will go quick and I'll be back before you know it."

But I finally put into words, what wasn't readily apparent.

"Nolan, these are happy tears, I promise.  I will miss you, so very much.  But I am so happy you get to go!" 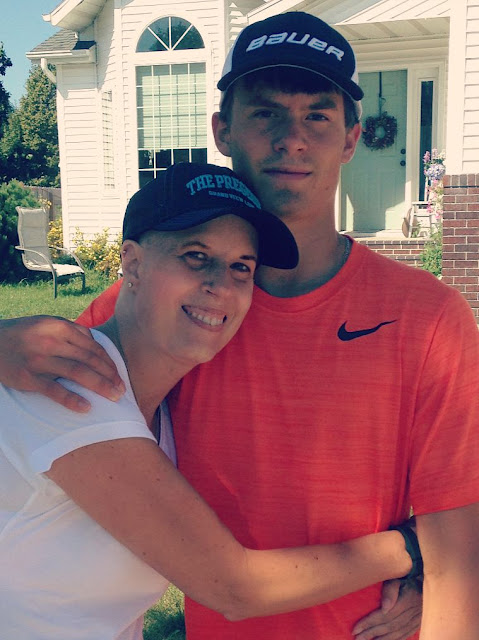 Plus, the pile of wood had showed up, just when I needed it most.

I've felt so vulnerable lately.  Depleted in energy.  Inability to see very far down the road.  There have been some long, quiet, and lonely days, open for much reflection.

Have we been doing the right things?  Have we been good stewards of our gifts?  Do we bless others as we have been blessed?

As I've wrestled with these very big things, a pile of wood with a number on it, landed in our front yard.

And the number?  Is my mother's old house address.

With a message, coming through, loud and clear.

The address of her old house, that we just sold, in trying to settle her estate and pay off her debt, with a tiny bit left when its all done.  My mother's estate, that is seeing us through some of the big changes we face.  (The 1703 is most likely a job number, but the irony of the meaning for us is no coincidence.)

It feels like a wink from her, from Him, saying, "it's okay." 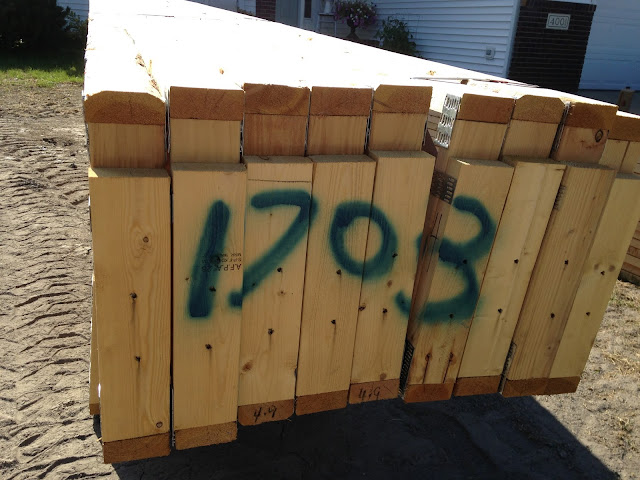 So I assure Nolan,  I hope he feels, Grandma, and all of us, are happy he gets to go to camp.

That day he left, I threw on a hat and threw my arms around him, holding on tight as long as I could.  What I love about this kid?  He held me, just as hard, just as long, his strength and maturity climbing to new levels, as we parted ways.

Hours later, I receive this photo, via text from Rick.  This is the main entrance to the campus at Shattuck-St. Mary's.  It's simply breathtaking. 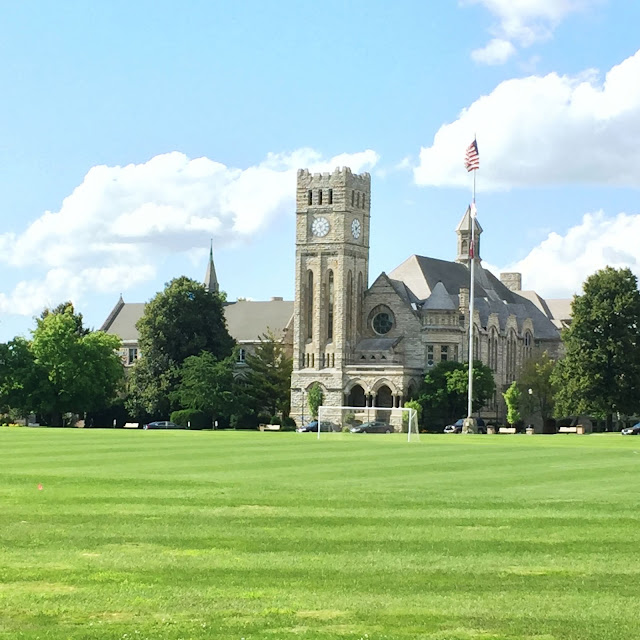 Gradually, each day, I've felt a little better.  I've been able to be on my feet for increasing amounts of time.  Some color has come back to my face, and my breathing and heart rate are not so laborious again.

So on Friday, Rick made a small bed for me in the back of the truck.  We had yearbooks to pick up, just an hour away from Faribault, and Nolan.

Friday at dinnertime, we arrived at Shattuck to see Nolan.

Here is the entrance to Whipple Dormitory, where Nolan is staying. 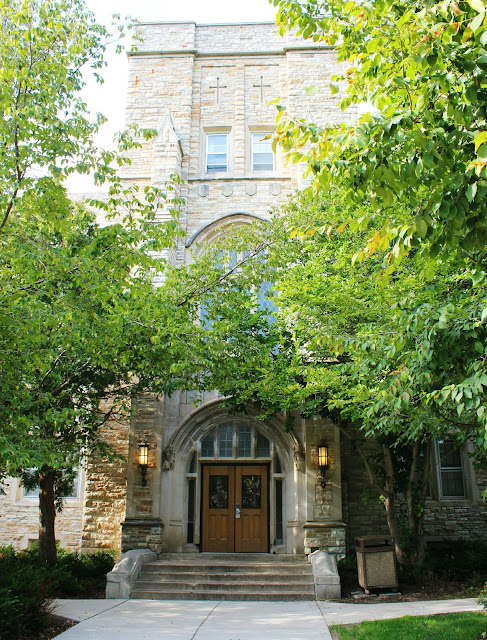 The fascinating details lurking behind every turn.

I'm breathing so hard, and I couldn't care less.  I'm pushing through, camera in hand, trying to take it all in. 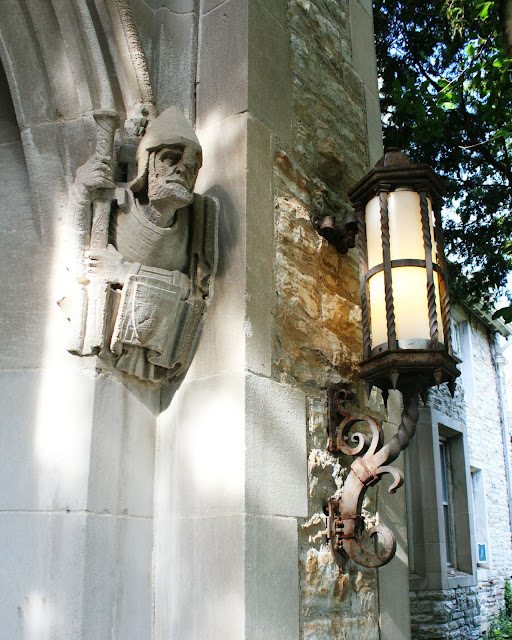 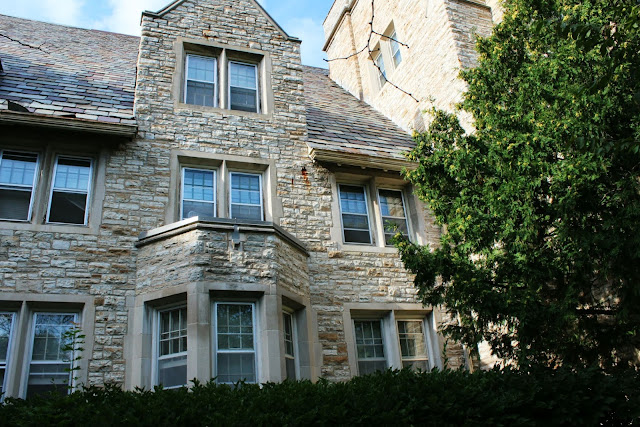 A long walk across campus to the ice arena to pick up hockey gear. 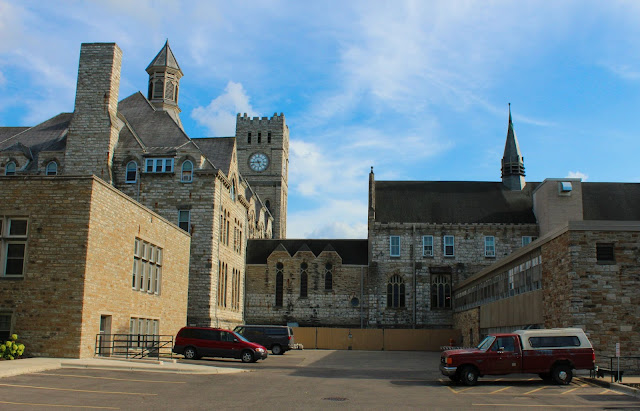 Loved this philosophical statement on the side of the building.  Its the heart of what the hockey development camp is all about. 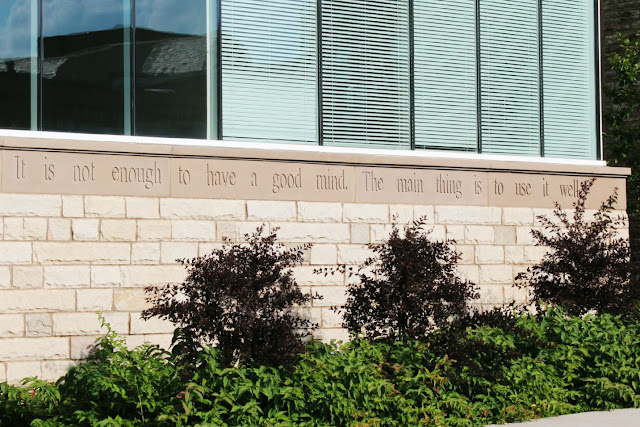 The ice arena is filled with memorabilia from former students and players.  Sidney Crosby to the left, Zach Parise above, as Nolan walks on ahead through the doors. 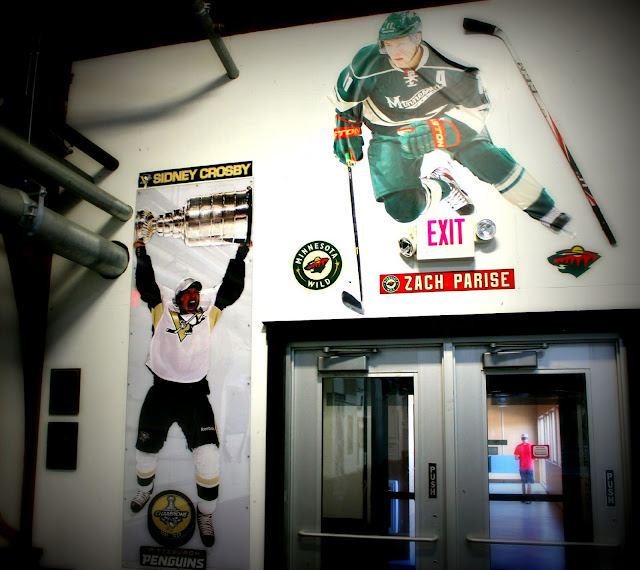 Then back we go, through the old buildings on our way to the car. 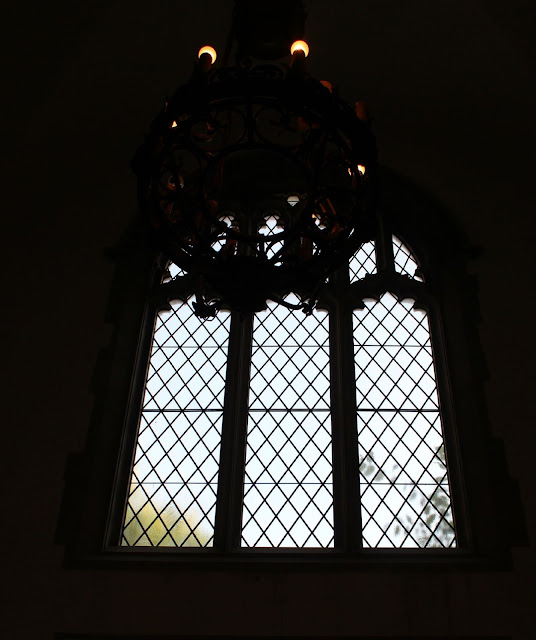 But I skipped forward,  just a bit, as the church beckoned me up ahead. 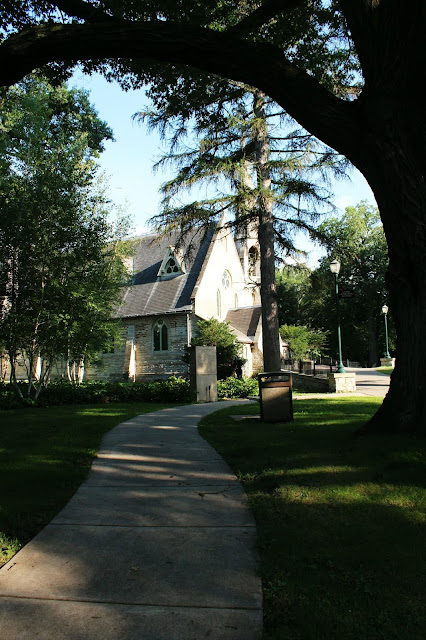 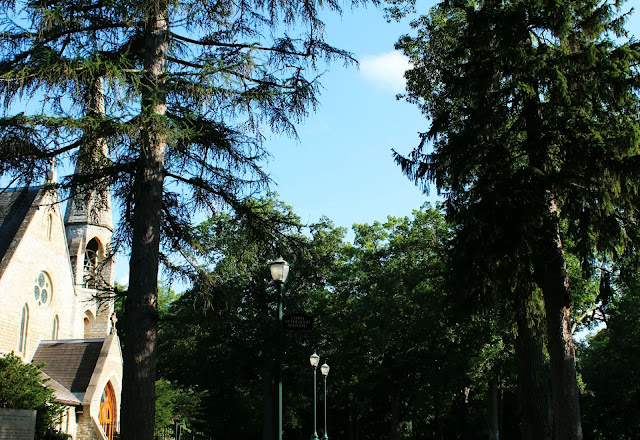 First, this prayer circle off to the side.  The peace welling within was unmistakable.

Nolan had called one night during his free time and said "Mom, I just feel so much peace."  Amen. 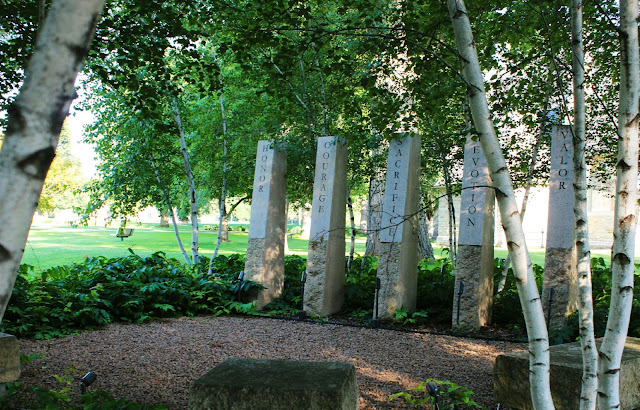 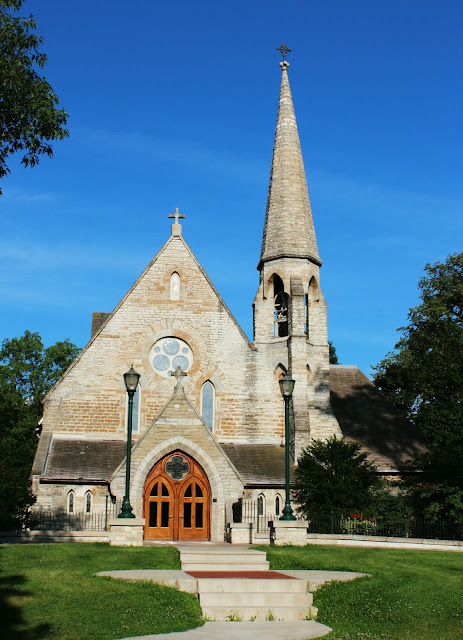 So aptly named, Chapel of the Good Sheperd.  Its an Episcopalian Church, and I longed to see inside, but we were in a hurry to gather Nolan, and his friend, and leave for a day. 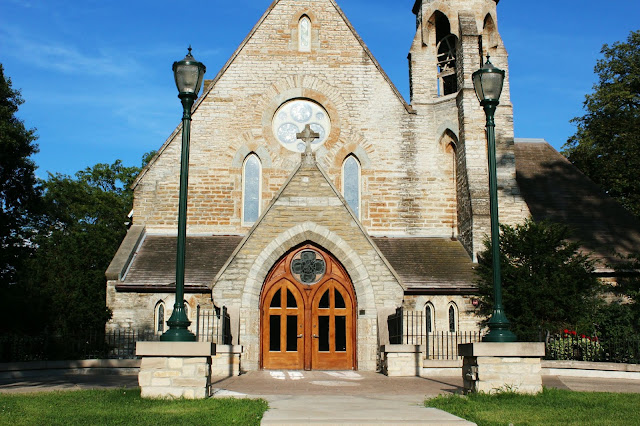 The next day?  We arrived in Brainerd, for a hockey tryout for Nolan.

But in between the try-out sessions?  We knew just where to go... Zorbaz on Gull Lake.

The boys quickly paired off for some beach volleyball, while the adults settled under a shady tree, listening to the live music. 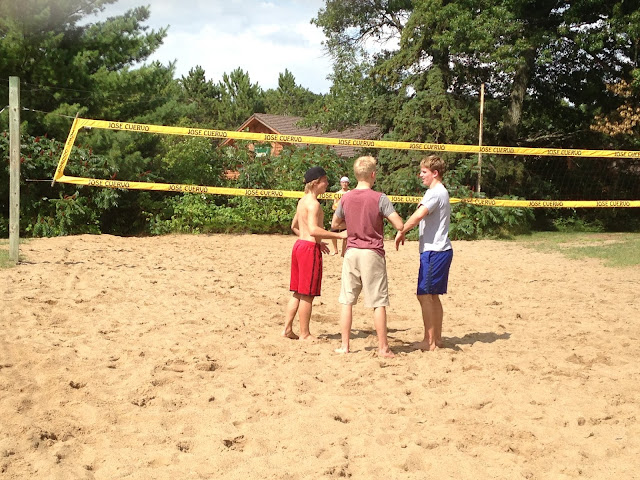 Boats cruised in and out of the dock area, as the perfect day rendered us quiet, and happy to just be there enjoying it. 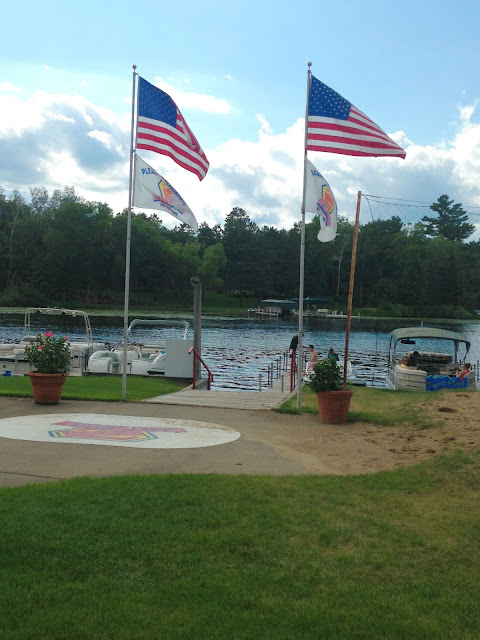 Nolan and his hockey friends had a great time, taking it easy for a bit, before they headed back to their final session.  (Here I am eating my words.  I took the picture saying I wouldn't post it and merely texted it,  but then it surfaced on Instagram-hehe) 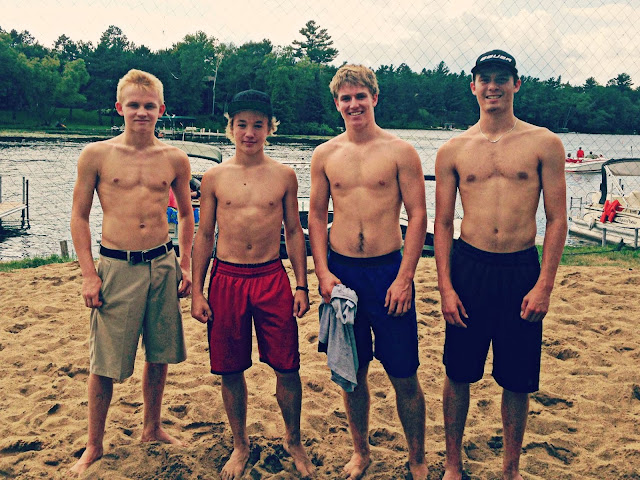 Later that night, Nolan and his friend Ben headed back to Shattuck, to finish their last week of hockey camp. 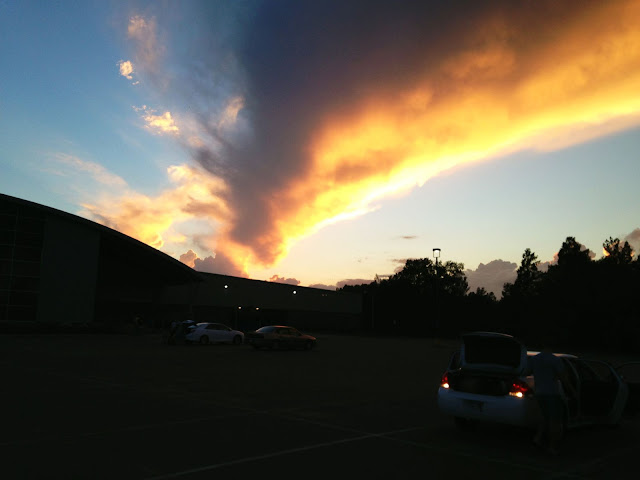 Rick and I headed back to Moorhead. 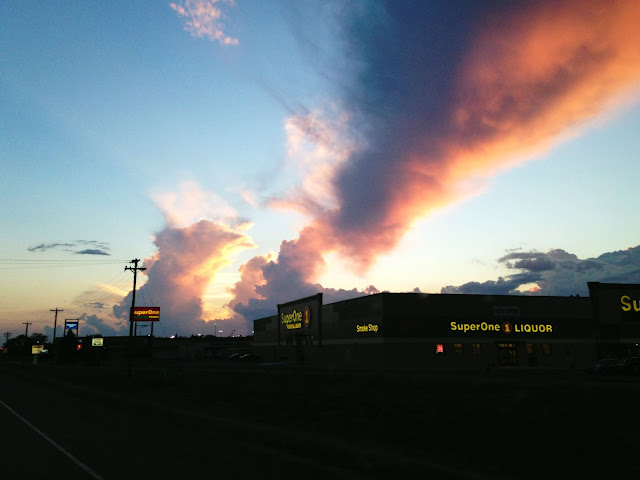 I am happy, exhausted in some ways, and revived in many others.

I have a full week ahead, and so much more to share.