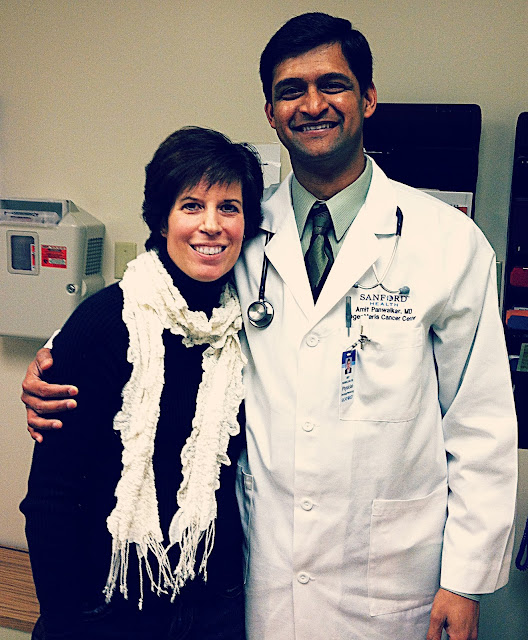 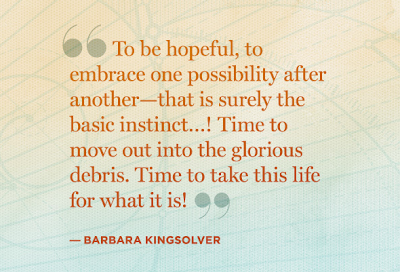 Dr. Panwalkar walked in a few minutes later than usual and sat down right away to begin downloading images.  The computer takes awhile to load and I fight off the urge to being barraging him with questions.

On the right side was my PET scan from 2 years ago.  On the left was my scan from 2 weeks ago.  The initial images were white, black and grey and were of my brain.  I panicked for a moment and said, "Its not in my brain is it?"

No, he replied, I hope you didn't assume the worst? It is worse, but not terrible.  I repeated the "not terrible," part, laughing at his description, and he laughed back saying "Sorry, not a great use of words on my part."

But I am reading him well and garner strength from his calm demeanor.

He is still shuffling through the layers of scans and and when he gets to my chest we begin to see the color yellow.  Yellow he tells me is cancer activity. He points out anatomical structures so I am oriented and then shows me the lymph node that has grown and is glowing yellow. ( Not a surprise, I've felt this one grow and he acknowledges this.)

Another small yellow dot appears, its the "lump" I felt that brought me in several weeks ago to be examined.  It doesn't appear to be a lymph node, but it doesn't matter, it glows yellow- it shows cancer activity.

He then continues down the scan and several more yellow spots appear and I see now, its back in my left lung.  The three spots I had before (last February) are growing and so is a new lymph node located next to my lungs.

We now compare CT scans from last year to the one taken a few weeks ago.  The lung tumors were shrinking last spring and that is what enabled me to come off chemo for awhile.

But it could be they never went away completely, and have just been remaining stable for awhile.

The lung tumors are now back to about their beginning size, which if I recall, were still considered small.

But I scan his face and he is calm.  So I quickly say- so no cancer in the brain, no liver, no breast, no spine, or any of the other places from before?

It feels so odd, to feel relief while still facing and hearing "you have cancer in your lungs."

He wants me to go back to chemo.  Its the drug that was a part of my original study- called Perjeta, or Pertuzumab.  He thinks they did actually hear from the study proctors, that I did NOT get Perjeta in the study and I therefore would be able to get it now, since it is FDA approved.

I would have it infused once every 3 weeks, along with my Herceptin.

Milder side effects- no hair loss.

So that is plan A.  Perjeta plus Herceptin 1x every 3 weeks.

Plan B would be an oral drug called Xeloda- much more harsh side effects, but we will cross that bridge later.

Having my ovaries out- not until after my trip.

Having radiation for the lymph node if it starts to become a daily nuisance.

And the possibility of radio frequency ablation to the lungs if say two tumors respond, and one doesn't respond to Perjeta.

Lots of variables, but lots of options.

He then asked if I had any more questions and I said just one,

Will you take a picture with me?

And then his face broke open into a wide smile and he laughed his hearty laugh.  Thats it?  That is your question?

Of course, he replies.

So he embraces me tight, and Rick grabs the phone and fires off a quick couple of shots.

Then we chat casually and he tells me about his ski vacation and how he learned how to ski for the first time- along with his daughter.

Lets just try to knock it back and keep you going for a long time.

The sun is shining and I feel bathed in light and warmth the whole way home.

“My grace is sufficient for you, for my power is made perfect in weakness..."