We've learned over the years that heading into a hockey tournament you never know what to expect. In a bracket tourney you just hope to get that first win to put you in the winners side of the bracket. Otherwise, if you lose, the best you can finish is 5th or 6th place. Colton's team had their home tournament and because he and another boy trade off being goalie, it was Colton's turn to be in net for the first game.

We faced a team from Canada and that always has the boys back on their "skates" a bit. The legend of the Canadian hockey teams looms large in their minds. Sometimes, these teams truly are no match for our teams. But on Saturday, the team from Canada skated pretty evenly with us. Our kids skated with passion and determination and we won the game 7-2! 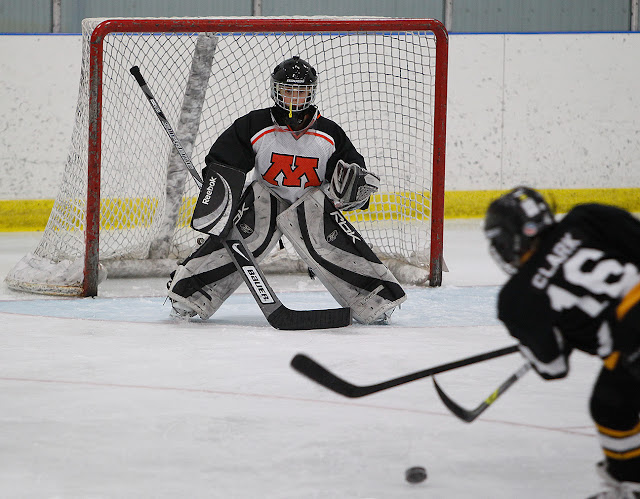 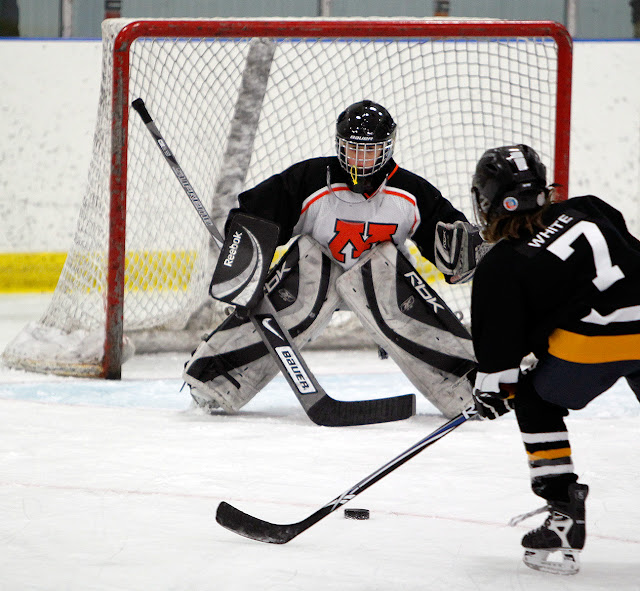 Colton had some great saves in the game and it was so fun watching them. Their second game was against a tough Brainerd team that we've played and tied once, and lost to once. We were due for a win! We looked a little tired and flat in this game and we ended up losing 6-3. With 1 win and 1 loss we were going to play for 3rd place. We faced a team from Roseau. Those northern Minnesota teams also carry a big reputation for playing some good hockey. We had no idea what to expect. Colton was back in net and pretty excited to play.

I find myself holding my breath a bit until Colton is in his groove and starts making some saves. He did not disappoint! Even when a team mate tipped the puck in on him and got a goal for the other team, Colton didn't lose his composure. He shook it off and kept his head in the game. We won the game and earned the 3rd place plaque and medals.

Here is Colton getting his medal- could that grin be any bigger? 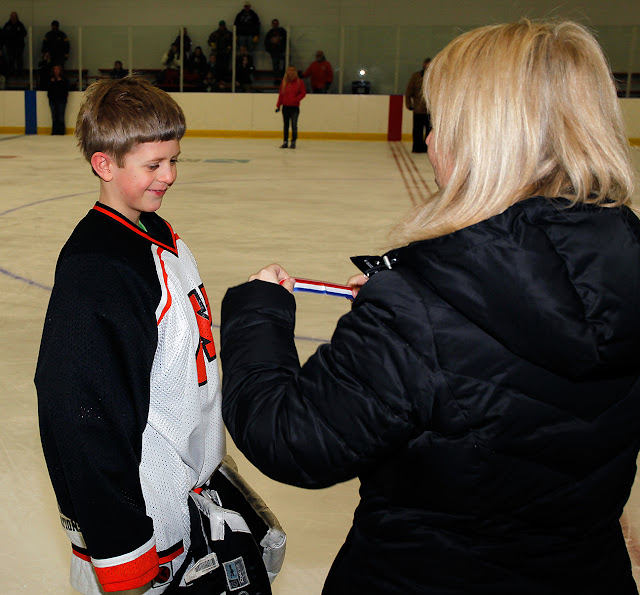 Here is the Squirt Orange team celebrating with their plaque! 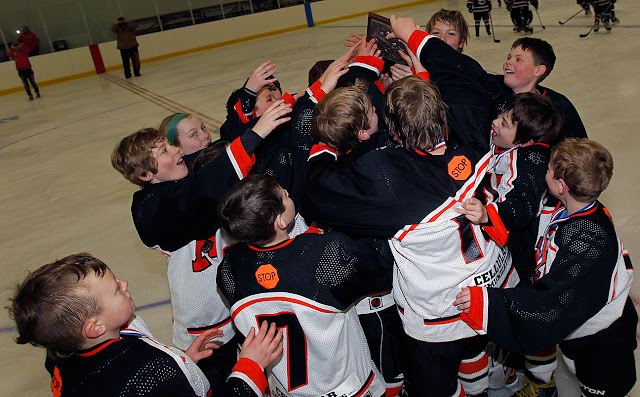 Colton went forward to receive the plaque for his team... 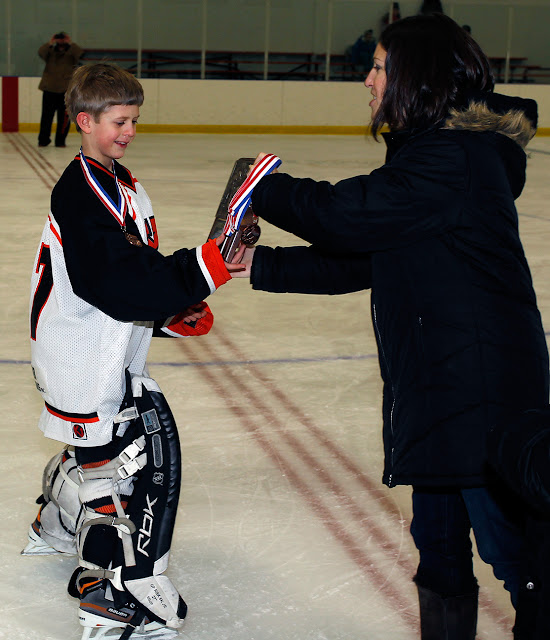 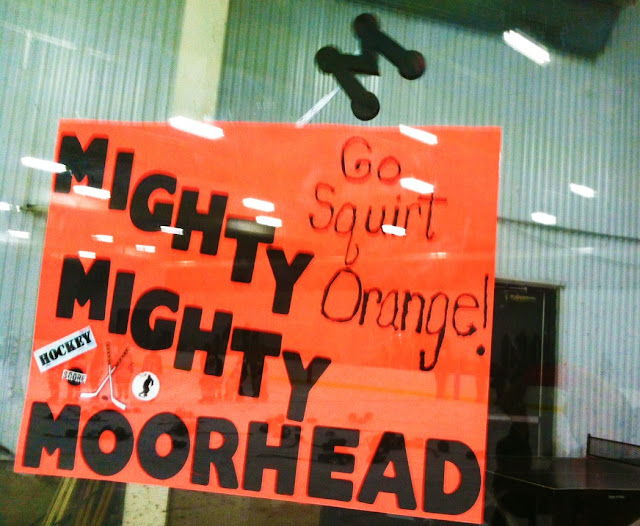 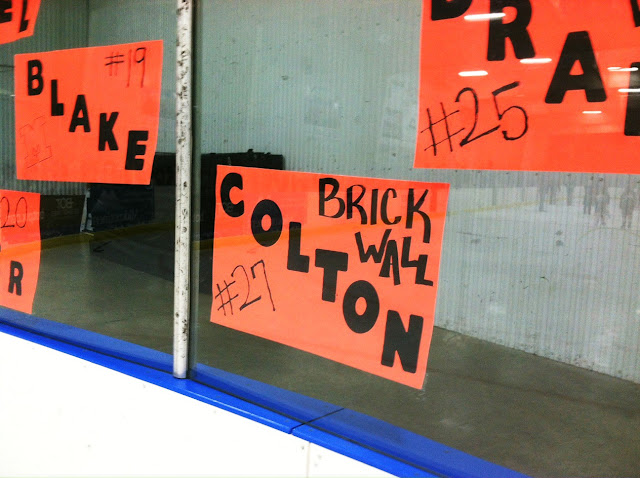 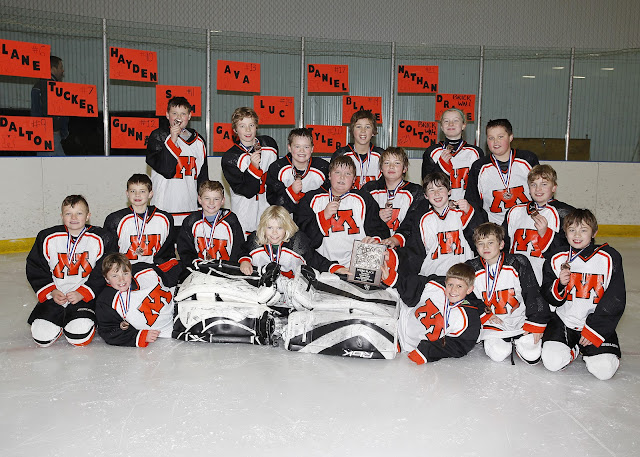 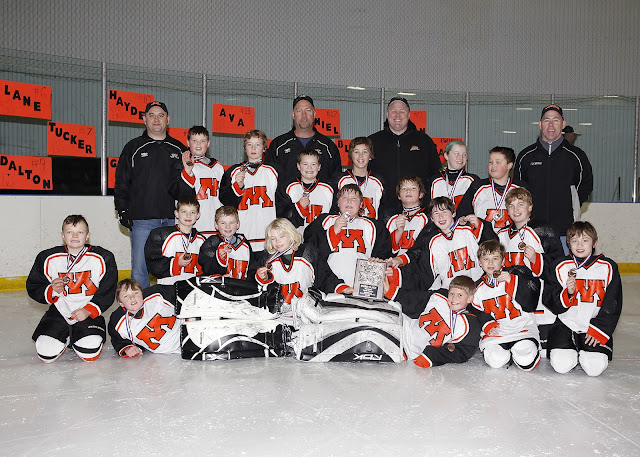 In between Colton's games, Nolan played 3 games.  We were literally at the rink all weekend long.  We'd get a 45 minute break once in awhile and go home to let Crosby out, but then we headed right back to the rink.  Nolan's team played some tough competition and won 2 out of 3 of their games.

We'll be headed to Minneapolis with Colton's team next weekend and Grandpa Jim will be coming here to take Nolan to his games.