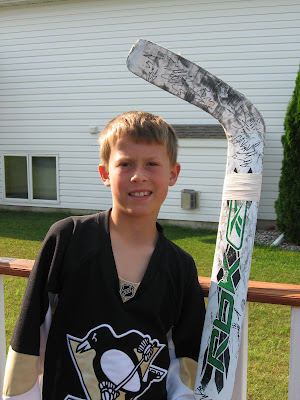 How many were there? 10. Hockey players that is. And not just your average player. One line alone had three Cullen boys. The other had two Lee brothers. The NHL was well represented. Division I hockey was well represented. Its not often you get to see UND Sioux players skating with an RPI player at the same time as a Carolina Hurricanes player skating with an Ottawa Senators player. But the one thing they all had in common? They were mostly former Moorhead Spuds and a couple were from the surrounding area.

And the lucky part for Nolan? A stick broke during the scrimmage. Of course, any hockey loving playing boy knows just what to do. Ask. He was not disappointed. One Sioux goalie bestowed his broken stick upon an eager 8 year old boy. The icing on the cake? Each player came to where Nolan was standing and signed it. And as he does with anything of great importance to him... he slept with it in his bed last night! Nolan seems to have a lucky streak going, it makes you wonder what could possibly be next? And... what did we do to be so deserving? We'll have to think of a way to pay it forward...stay tuned!
Posted by Vicky at 10:00 AM