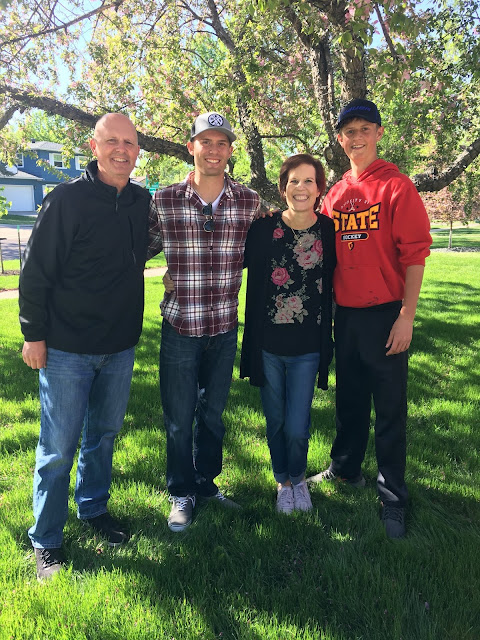 When I stepped into the exam room to see Dr. Panwalkar, I had no idea just how much everything was about to turn upside down.  Just two days prior I made it out to not just one, but two graduation parties.  The photo was taken by my cousin's house and yes, I was feeling pretty good.  I had used my oxygen for hours before I left the house and just felt pretty good to venture out.  The parties were great and I got to see so many friends and lots of family.

So I was feeling ok about my appointment and it started off with tackling each of the things I've been dealing with.  Dr. P had also figured some things out and prescribed all kinds of new things to help me.  Then we finally got to my labs and I mentioned how my kidneys were still so "mad at me."  When he saw the numbers on the screen for the first time, he quickly changed his demeanor.

"Oh thats bad, really bad.  Lets get on this right now.  He sat and thought a bit and then said.  "I think you need another stent placed.  One on the left side that works like it does on the right side."  I'll call Dr. Williams and we'll get going right away."

So as he typed away on the computer, I sought some clarification as I was not sure I was reading all of this right.  So I took a big breath and asked, " am I nearing kidney failure?"  and he stopped typing and turned to me and said, "yes.  I'm sorry to say you are and I can't tell you why or where its coming from.  Its very bad."  As we got up to go, he asked if there was anything else he could do for me.. and I thought of the only thing that it seem I needed- Could I have hug from you?"  I asked.  He looked so surprised and broke into a smile.  "Sure!  we can do that!"  And boy did he give me the closest, longest, meaningful hug I've had in a long time.  I tried to express my gratitude towards all he does for me as I didn't want him to carry the weight of feeling like he had somehow let me down.  The tension in the room deflated and I felt I'd go on despite how serious every thing was.

So... it shouldn't have surprised me as much as it did, but not only was I going to get not 1 but 2 units of blood transfused that day, I soon found out I was being prepped for surgery the very next day!  Dr. Williams knew how bad my kidney lab results were and that surgery was a Hail Mary to try and rectify the damaged kidneys.  So he agreed to squeeze me in the next day.   I still had chemo, then was squeezed into a blood transfusion, then hurried home later that evening to prepare for surgery the next day!  Whew.  I was overwhelmed with a flood of emotions.

But the craziest part is how much energy and life was restored to me through those 2 blood transfusions.  Holy cow!  Not only was I able to move without oxygen, I had desire and drive to do so much.  My house is very cluttered due to Rick having his busy season in work.  I've been slowly sorting an cleaning all over, just one day after surgery.  It feels so good to be here typing away,  So I hope it helps you for the next part I have to share.  I'm just being honest and hopefully putting us all on the same page.

I arrived at the new Sanford Hospital for surgery around 8 am in the morning.  Because I was being squeezed in I spent a lot of time resting in my prep room with Rick.  Dr. Williams peeked his head in the door and then came in.  He is so warm and personable.  He looked tan, and refreshed and it was so good to see.  He sat down and took off his surgical hat. Then he shook his head as he started to speak.  "Your numbers are awful.  I'm preparing myself for what I may see when I go in.  But you do seem to have a little infection. I should be able to assess what I can see.  I'll just deal with it once I go in.  But I have to tell you, I don't think a stent is the answer.  I'm sorry to say, I think the damage is likely chemo related or some other treatment maybe, I don't know.  But lets give this a try and see.  He smiled when he went he went off and I thanked him as he hurried out the door.  It was the last I saw him that day, but he did meet with Rick.

Dr. Williams showed how sad he was when he talked to Rick as I was wheeled into recovery.  Rick said he was teary eyed and told him "it looked terrible inside.  So many tumors had grown everywhere and he could only shake his head.  He even said it was now growing in my bladder and there really isn't anything they can do for it.  He also said my kidneys are in very rough shape.  Really bad shape.  And yes, its common to not have many outward signs that anything is happening.  So all he could do was put me back in the hands of Dr. Panwalkar and see what he wants to do.  Rick says he always says the nicest things about me.  He expressed again how this shouldn't be happening and its not fair when these hard things happen to good people.  His compassion is so real and authentic and helps us feel supported all the way through.

So I'm home again.  Feeling physically better than I have in awhile.  So I"m bury myself right now in cleaning, and sorting and organizing.  And a huge stack of cards arrived cheering me up so- thank you, thank you!  I have a hard time keeping up with my gratitude and thank yous for all you have done for me and for Rick and the boys too.  I could not do this alone.

I still have hope.  No wonder it picked me for this year's word.  I need huge hope right now.  Will you hope along with me?  We can do this together!  No matter what it is we have to do, together is the only way.

Love to you all~