because it's the Cup

I awoke last Friday with a prayer of gratitude uttered from my sleepy self,  Thank you, God.   The big day is here!  And you've given us this beautiful, sunny, summer day at it's finest, to celebrate.

I could hardly wait!  We'd been happily consumed for weeks with executing the little details for Rick's role in the Celebration of the Stanley Cup with Matt and Bridget Cullen.  But first, it was time for the arrival of the Cup!

It's 6:15pm when we arrive at the Barn at Five Lakes Resort.

I simply brought my cell phone to shoot a few photos, wanting to just soak in the moments with all the friends we knew we would spend our time with.

We knew we were in for something special... we had NO idea just how special!!

But it's 6:30 when Rick and I discover we each have a voicemail message from Rick's Dad, Jim.  "Please call as soon as you hear this."

We step out to the back of the barn, Rick ahead of me on the phone already.

I have visions of Crosby having a seizure, or something to do with one of the boys.  Nolan, our new driver?  Colton?  My heart thumped wildly.  Jim wouldn't call if it weren't something we needed to know right away.

It's moments later that Rick appears, his eyes glistening.

It's my cousin, Randy Gerdon.  Randy died unexpectedly at home- sometime during the night.

I'm instantly in shock- I couldn't have possibly heard that right?

We take a few moments to gather ourselves. Heartbroken. Few words to say to one another.  The knowing etched into our faces, with a shroud of shock all around.

We slowly work our way back to the party, numb.

We hear the whispers of the Cup arriving soon.  And we decide we have to stay in this moment.  We have to push the loss of our cousin off to the side tonight, for now.  Because if you knew Randy?  He'd completely agree.  Often the "life of the party," kind of guy that he was, he'd tell us to celebrate.

Rick and I, having lived with the unknowing, uncertainty of the day to day with surviving cancer, we have learned to compartmentalize.  We've learned to shelve things, labeling the book, and only pulling it out when we need to. How else would we get through it all?

So, somehow, we slowly stepped back into the warmth around us, the beauty of the landscape, the laughter of friends, and a once in a lifetime kind of weekend just beginning to unfold. 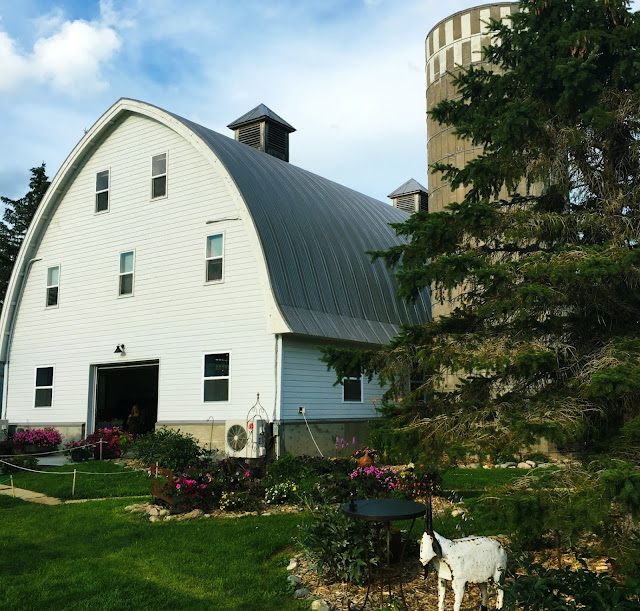 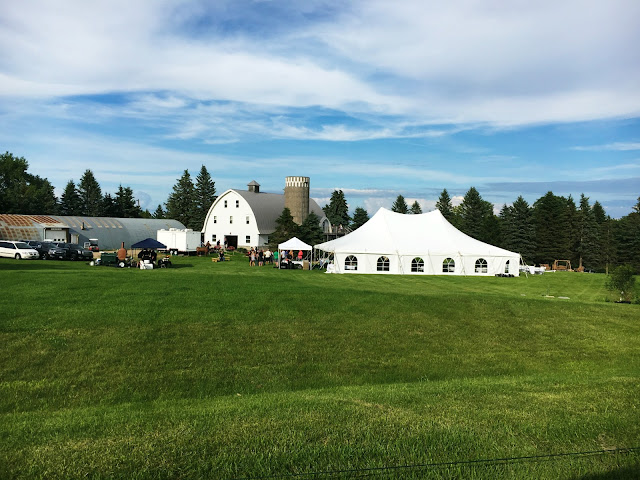 Just moments before, I was giddy when I saw Ria, who would be shooting photos for the night.  My excitement mounted as I fully know the talent and vision of Ria will capture the purely "magical," feel that enveloped me as I approached the event.  For a true taste of the stunning shots that Ria took of the event, you would not be disappointed by a visit to her Facebook page here: rialeephotography. 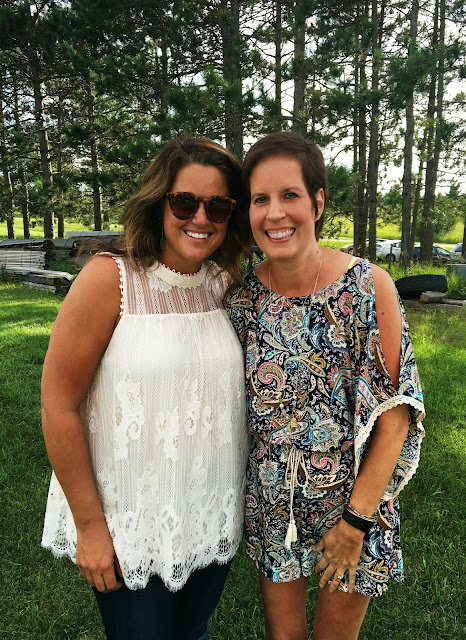 And who is the second person I run into?  Bridget Cullen.  We try to move out of the sun for a quick photo, because Matt and the Stanley Cup are arriving soon and she is on her way up the hill.  And yet, she doesn't hesitate to embrace me first, and linger for a quick photo. 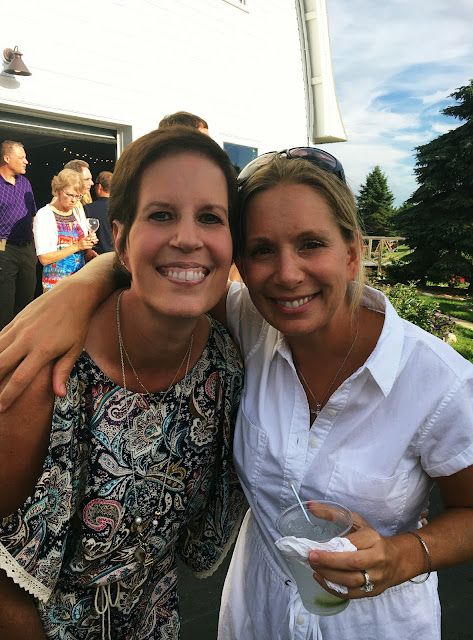 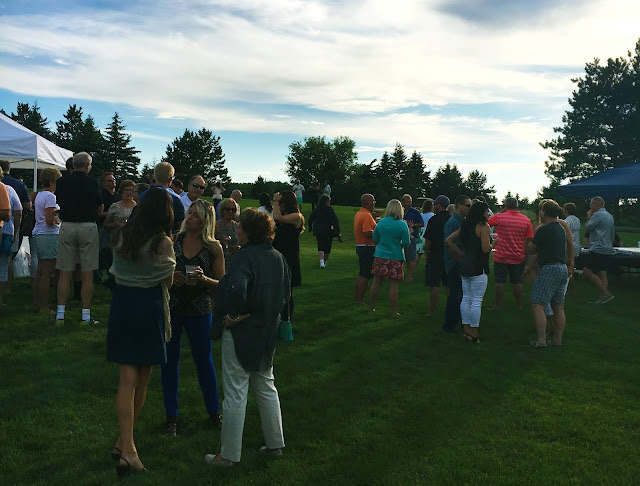 Bridget, with Matt's mom, Nancy, who will go and greet Matt and the Cup when it arrives... 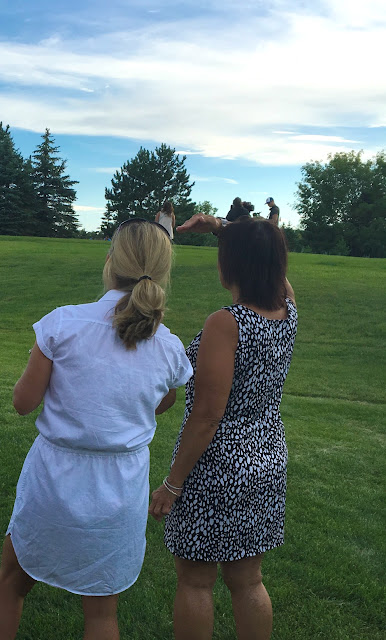 Matt and the Cup have arrived!

After a few photos outside with the cup,  Bridget and Matt spent a few minutes shooting photos upstairs, and then the rest of us find our way up to see where the cup will reside the rest of the night. 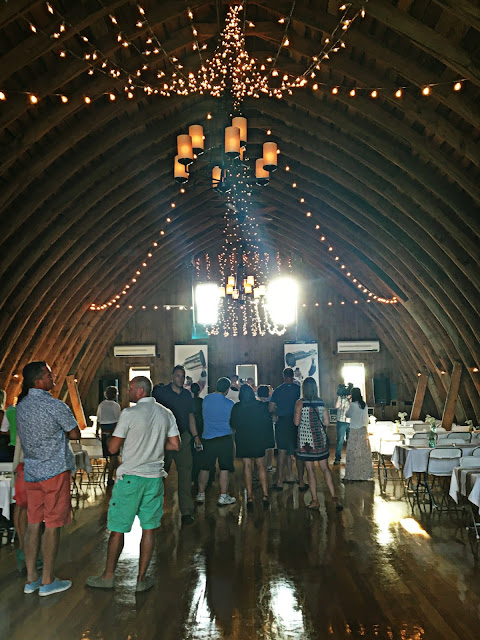 My first time photo with the cup.  Matt won it with the Carolina Hurricanes in 2006, and with the Pittsburgh Penguins 10 years later in 2016.  It just doesn't get any better than this. 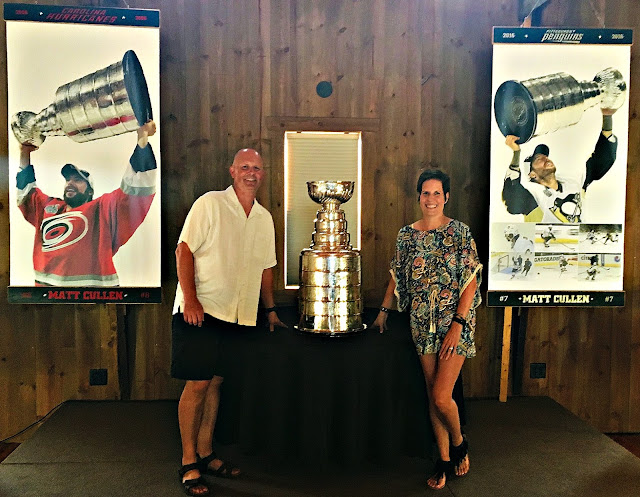 Moments later Matt embraces me and I tell him I'm choking back tears- because if I start, I may never stop.  So Bridget joins us and we're honored and humbled to be amongst such generous and giving people.  I'm sensing the ripple effects already beginning to flow out from all the blessings that abound. 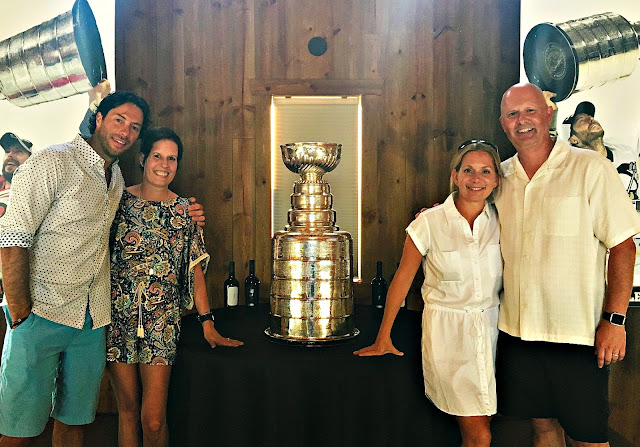 Rick and I then move back outside as dinner is ready.  But first I grab our friend Julie for a photo.  The bracelet on my arm says, "I am blessed."  And the bracelet on Julie's arm?  Is the pink one made from skate laces by our friend Pam in my honor, over 5 years ago- and Julie has never strayed from wearing it.  She is the epitome of generous, thoughtful, and beautiful.  I'm not just wearing "blessed," I'm feeling it. 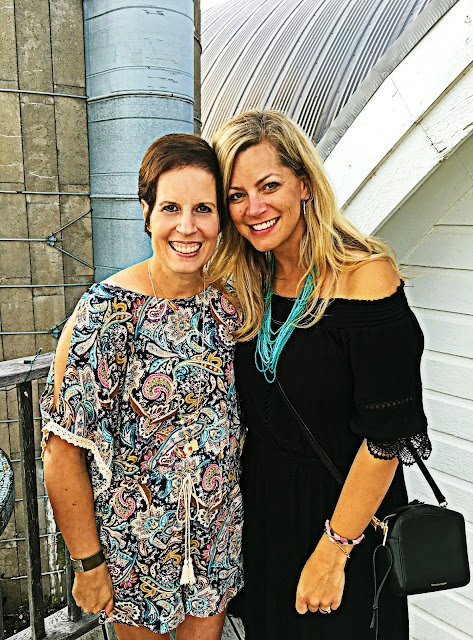 We then gather outside and feast on the smoked pork, and salads, and tasty food. 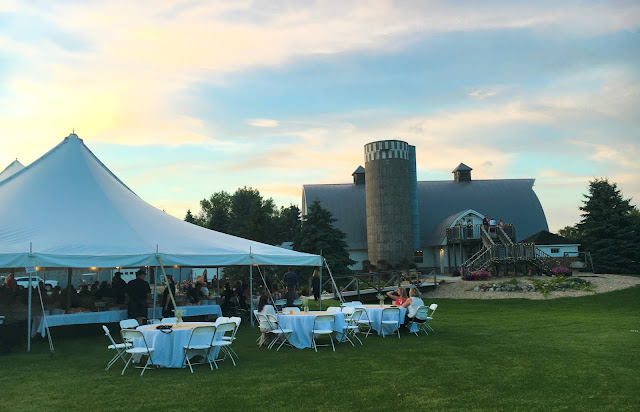 I can't even say the last time I have seen Jen, so its a treat to catch up with her- we pick up right where we left off. 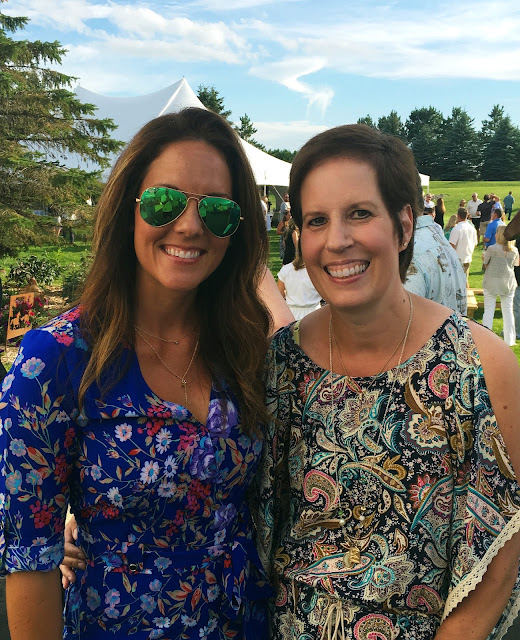 Everywhere you turn is a beautiful area to see and explore. 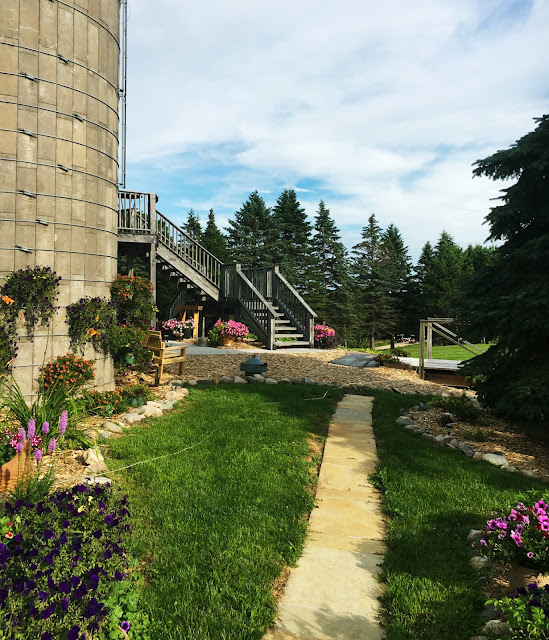 My sweet friend Nikki - it isn't often we both have a free night- but I'm grateful every time we do. 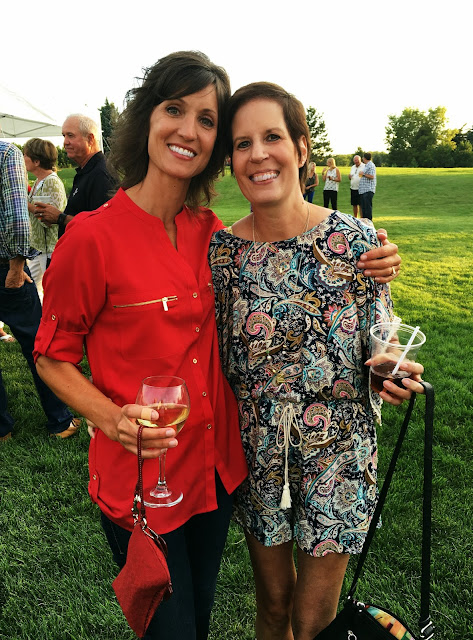 I couldn't get enough of the golden sunshine,  mingled with laughter and celebration around every corner. 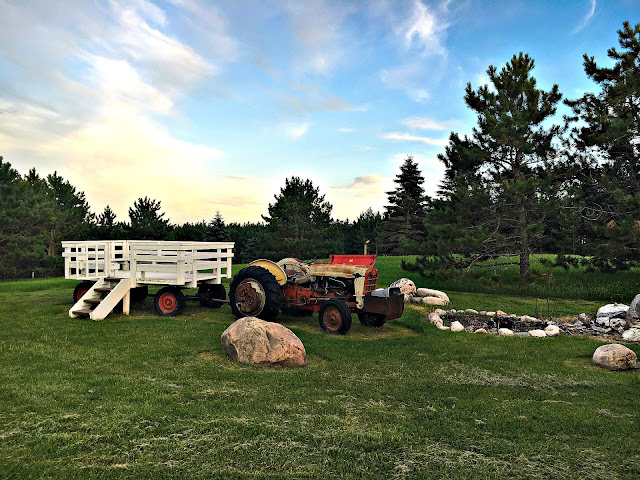 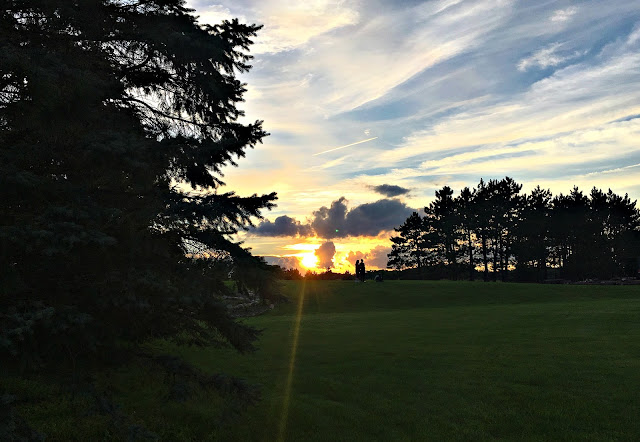 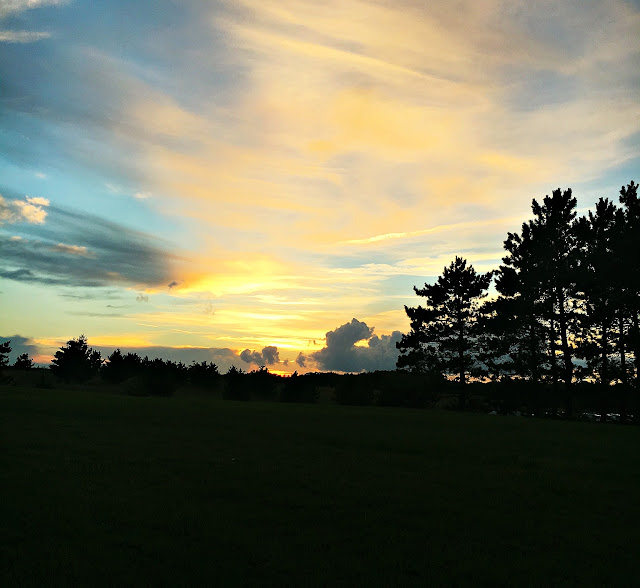 The sun went down and we gathered inside.  The champaign bottles were open and the Cup was filled.    And we watched as family members drank, and Cully's Kids Foundation members drank.  It's truly the dream of anyone who knows the reverance and prestige associated with Lord Stanley's Cup - to simply be close to it.

But the Cup will leave at midnight for that night, and its close to that.  I've held back from drinking, but Matt smiles and gestures to me once more, and this time I will.  The Cup weighs 35 lbs., and so Matt and his brother Joe, along with his brother Mark looking on,  help tip the cup as I lower myself to drink.  Oh the sweet taste of victory.

Walt, the keeper of the cup, has come along for this trip.  He shares with me that so many of the NHL players choose to celebrate the cup with a few family members and friends.  But Matt and Bridget's generous spirits humble me so, they desire to share the cup with as many as they can. 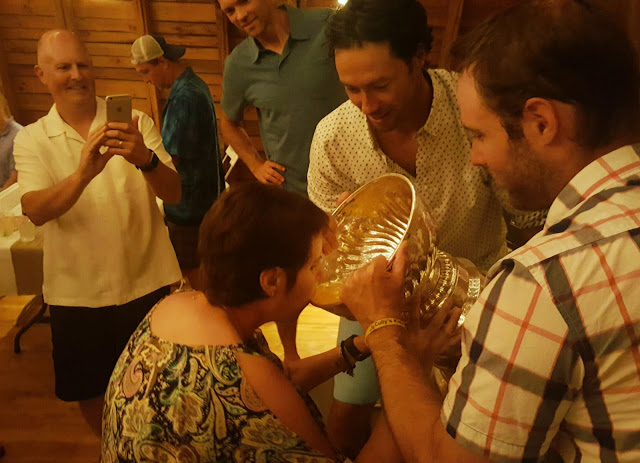 Rick and I leave shortly after the Cup does, we have an hour drive back home and yet another big day ahead of us.

But look what is waiting in my messages when I arrive home?  A beautiful photo from Ria- a shot of the barn in all its glory, with a Superman standing next to me.  I'm overflowing with gratitude as my head hits the pillow this night. 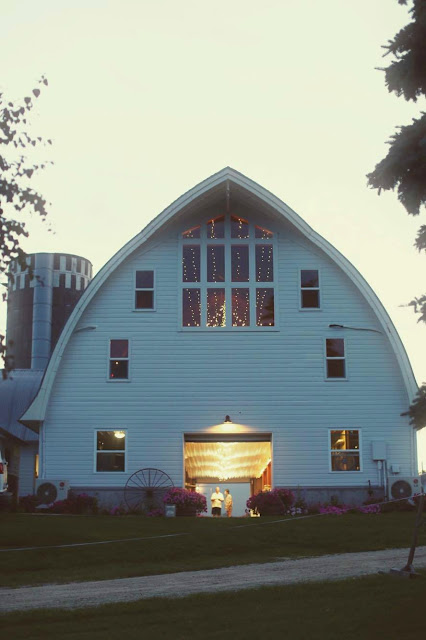 The next day, was the day the Cup got to come to Moorhead, to the Youth Rink and every Moorhead hockey player was invited to come and have a photo taken with Matt and the Cup.  But first, Rick took one group photo of all the kids with Matt and his 3 boys in the center! 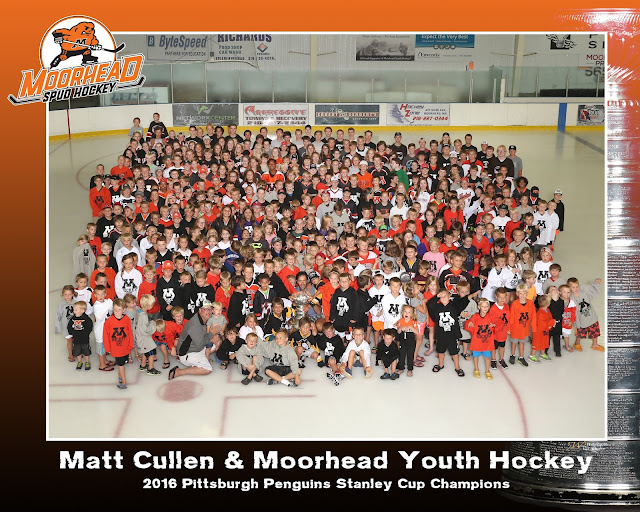 I had forgotten my own phone and camera that day.  So Rick set up a chair for me and I sat and watched as Matt smiled and posed, for just over 1200 photos in 4 and 1/2 hours.   Our boys were the very last ones to go.  Matt's smile was every bit as genuine and sincere as it had been for the very first shot.

(This will be the look of the photo that each Moorhead hockey player will receive. ) 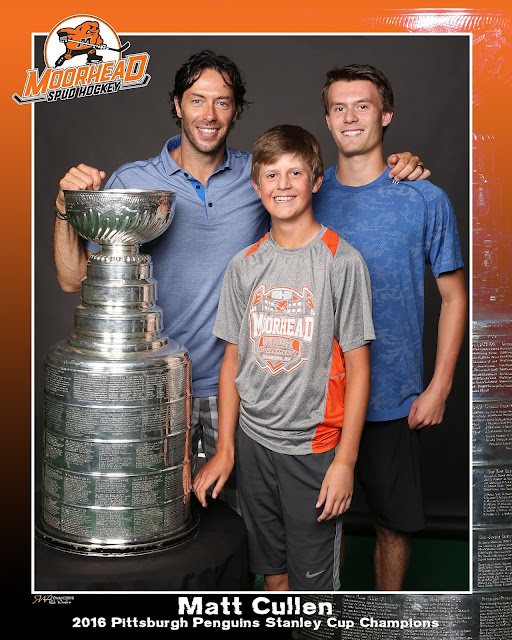 One of my favorites. Matt has a genuine gift of meeting you, right where you are. 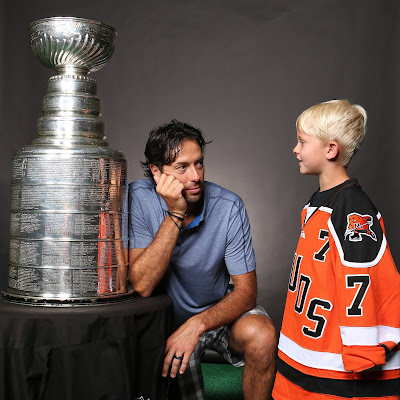 And he never stopped.  He did not take a break, ask for anything, or say no to anyone.  He brings professionalism to a whole new level.  Because I'm not kidding.  He took a half hour break to eat, and then went outside and brought the Cup to another huge crowd.

Just look at all the people- the line was all the way around the building!  And Matt gave even more of himself as he took photos until 8:30 that night, for a Sanford sponsored event.

A few of us, went off to a local restaurant to gather for dinner, and await Matt and the Cup.

Nolan was excited to see Ben, Matt's cousin.  Ben and Nolan are high school rivals on the ice, but friends the second they get off.   We're so excited to have the chance to watch them continue to play in the years ahead. 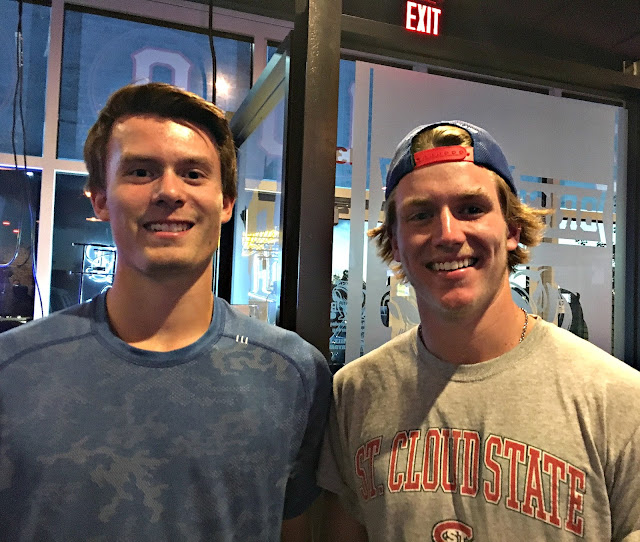 This guy was all about the Cup.  He threw his arm around it and admits he kissed it. He posed for all kinds of photos with the Cup.  That grin is coming from the sweetest spot within that boy. 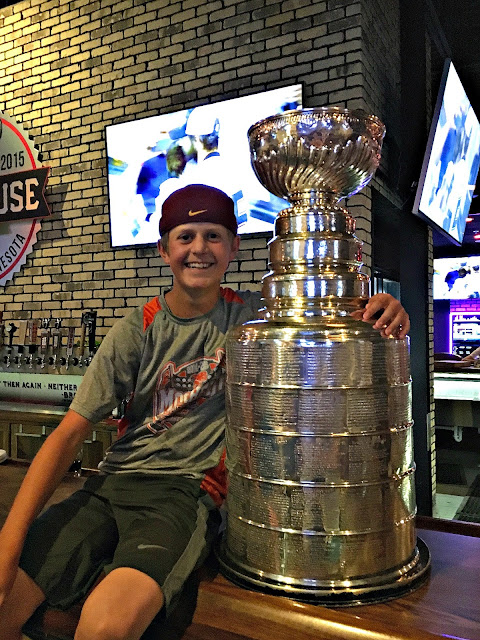 And this guy too.  No shortage of smiles this day. He is so 16 and I was not going to know all that he was thinking, but that smile spread across his face all day long too. 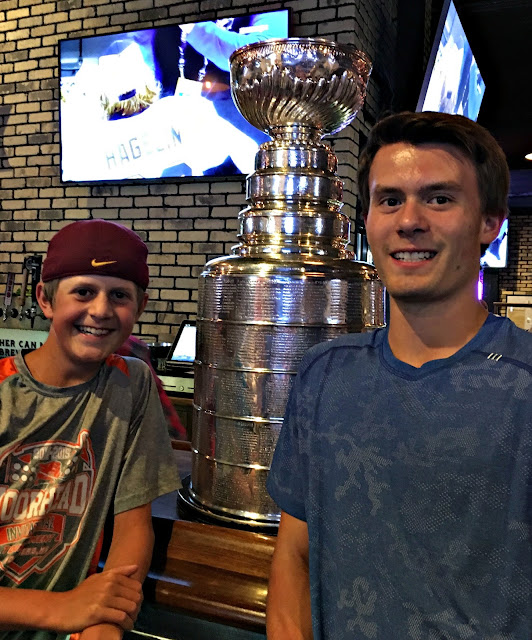 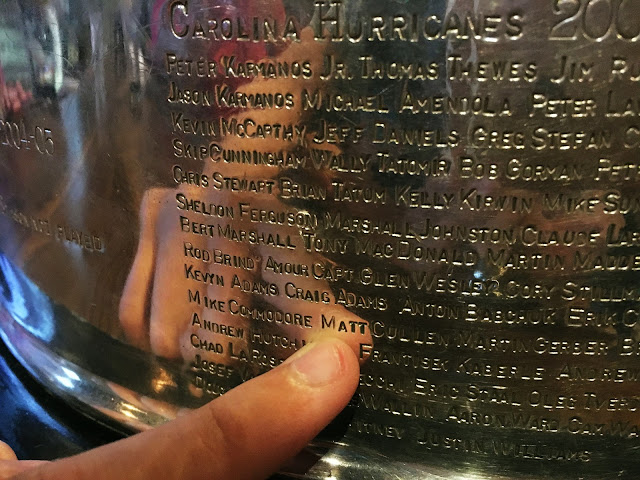 Colton shows me where Matt's name is from 2006.  Soon, his name will be added for another time.


In so many ways, even though Walt was officially keeping tabs on the Cup, it felt like Matt was the keeper of the Cup in a way that weekend.  He lifted it, he tipped it, he offered it, thousands of times, to whoever stepped forward to partake. Matt has a way of staying present, and entering the moment with who ever is in front of him.  That ripple effect, of Matt and Bridget, giving so selflessly from such an authentic place, just keeps rippling away.  They're more than leaving their legacy, they are living their legacy, moment by moment, showing us all how we can too.

Rest in peace, Randy Gerdon.  It was standing room only both, for your prayer service, and in the church yesterday at your memorial service.  We wore our Husker Red for you, and read all the scriptures you had highlighted in the bible, and laughed as much as we cried.  Clearly, you were living your moments full, too!  I have no doubt your joy-filled legacy and that hearty laugh will go on in all of us always.  GBR! 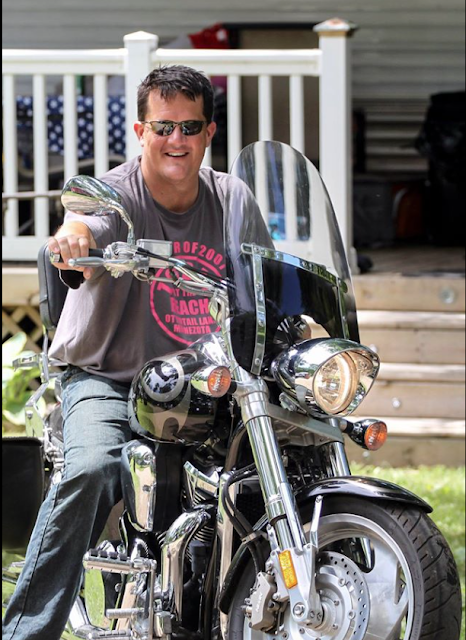