We had such a big weekend filled with all kinds of memory-making moments.  We had sadly learned the other goalie who shares with Colton in the goalie duties for the team,  had come down with a fever and was too sick to come this weekend.  Colton would have to be "on" for however many games we played.  We've prayed all weekend that Luke would recover soon.

It was the first time I heard Colton admit he was a little nervous.  But he didn't act the part, and seemed calm and focused as we arrived in Park Rapids.

We were facing teams we'd played all season long.  We knew any of them, including our team, could come out victorious. 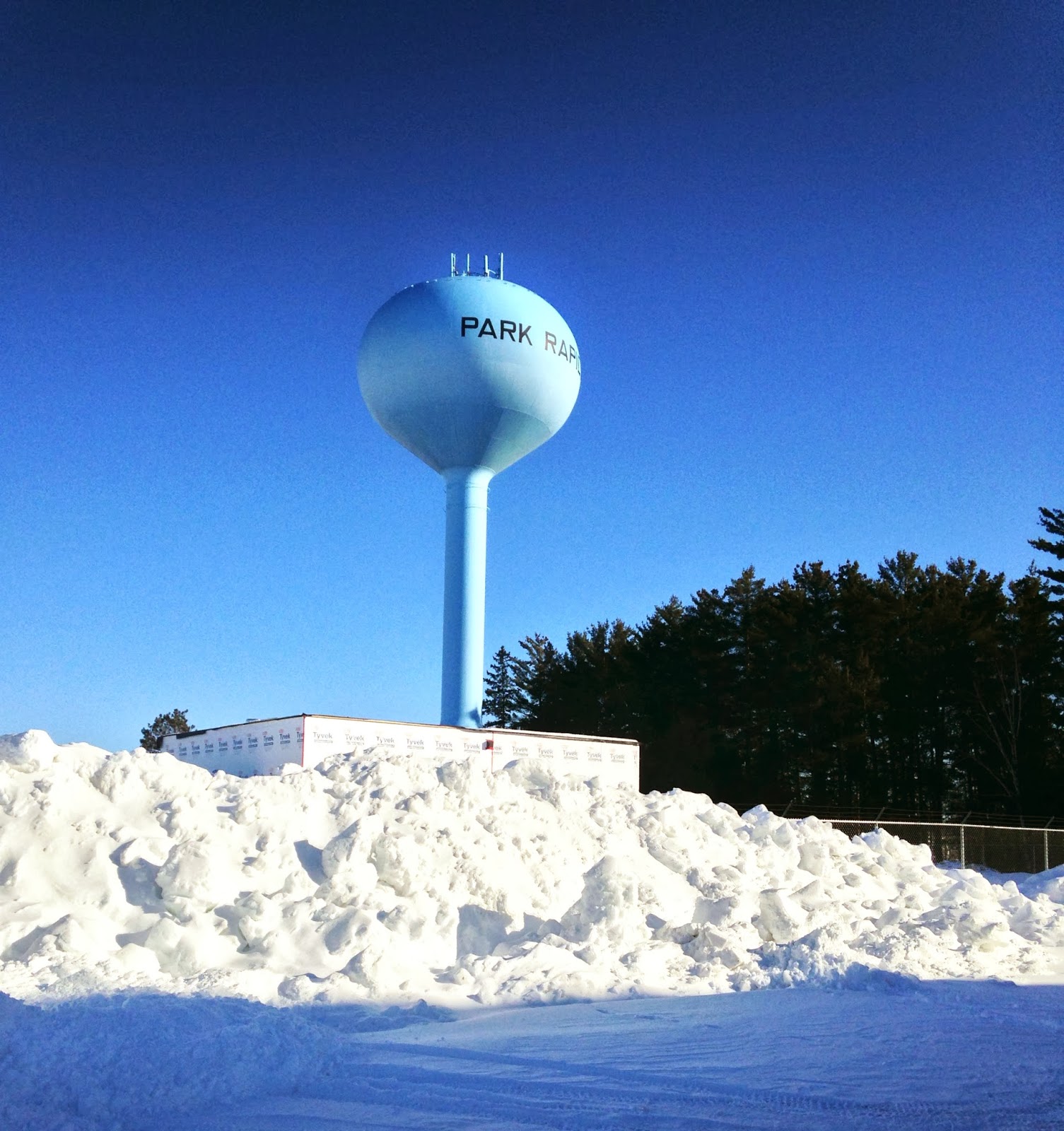 The sun had warmed the temps to above zero.  The outdoor rink looked really enticing... 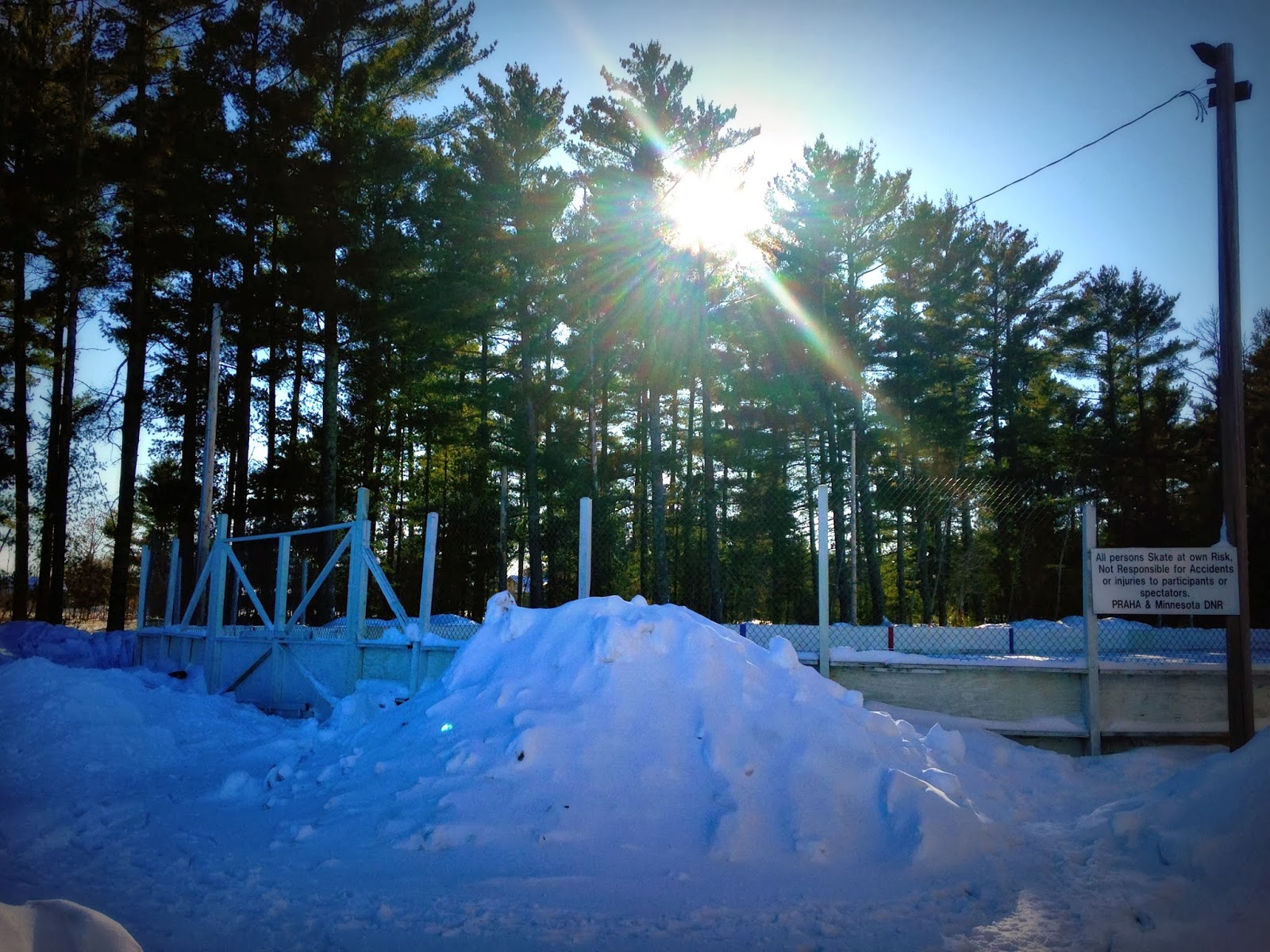 The arena in Park Rapids is just a quonset building and a slab of ice.  It was one of the colder rinks we've experienced this year. 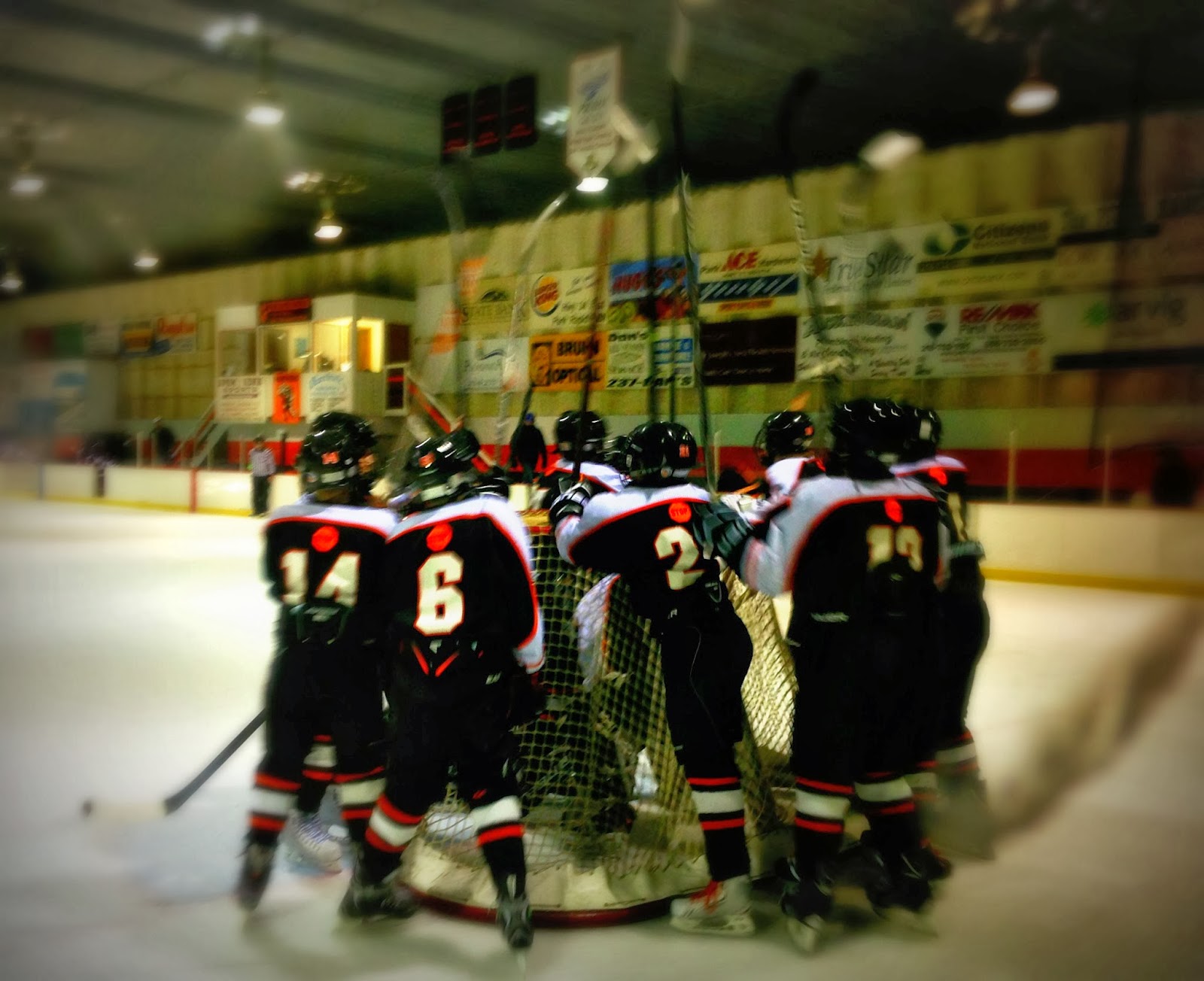 Colton getting focused as the team prepares for the opening face off. Nolan had a game later Friday night.  He would play in his own district game a couple of hours away.  But first he got to watch his little brother play for one of the first times all year.

He was duly impressed. 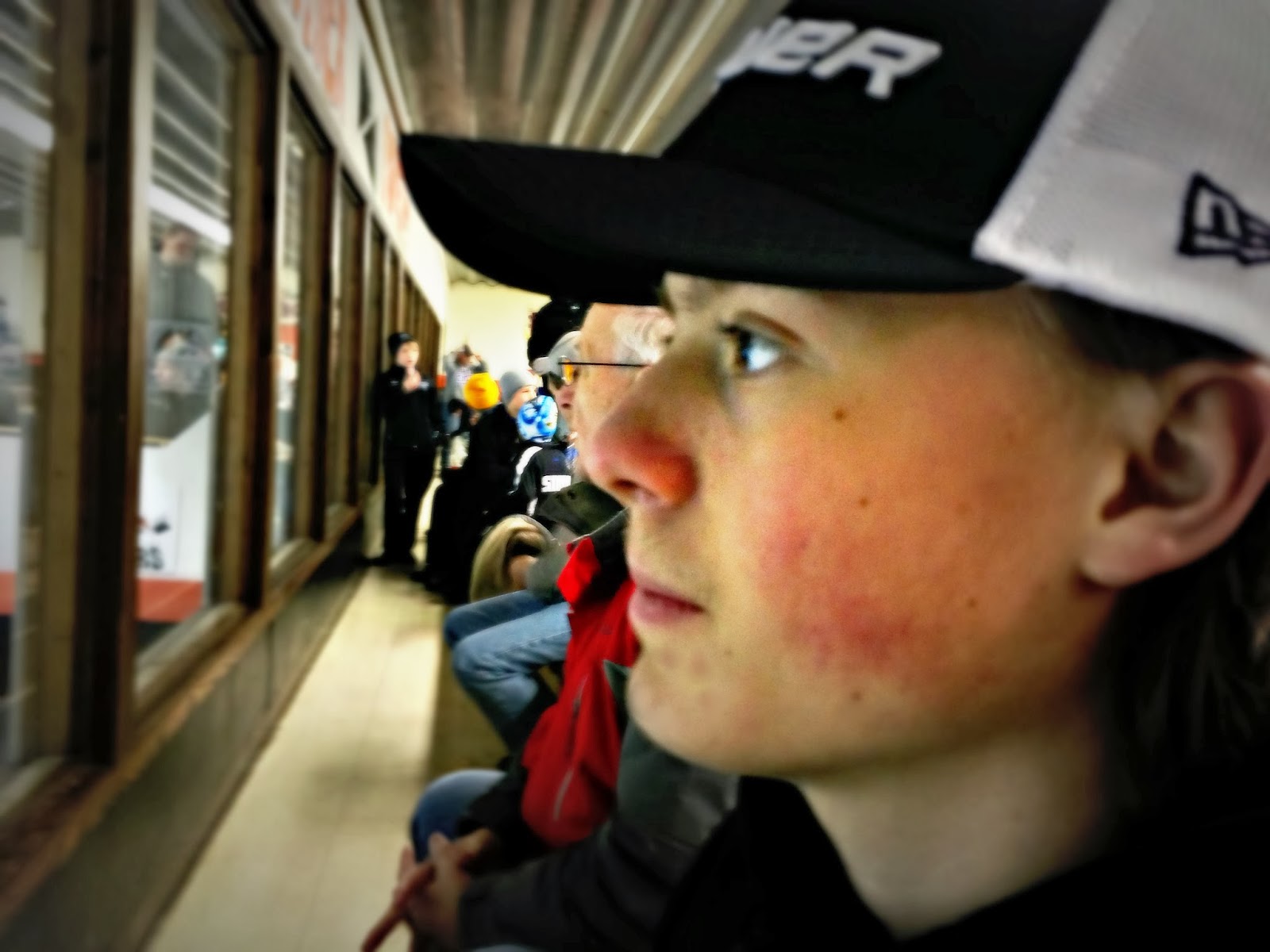 It just wasn't our night.  We lost to Alexandria 7-4.  We would play the early morning game Saturday against Walker at 8.  It means a 7 am drop off at the rink and it becomes a very early morning.

With Grandpa's help in getting Colton to the rink, Rick and I had time to stop to catch the sun coming up over the frozen lake by Grandpa's lake cabin.  It was the perfect start to our morning. 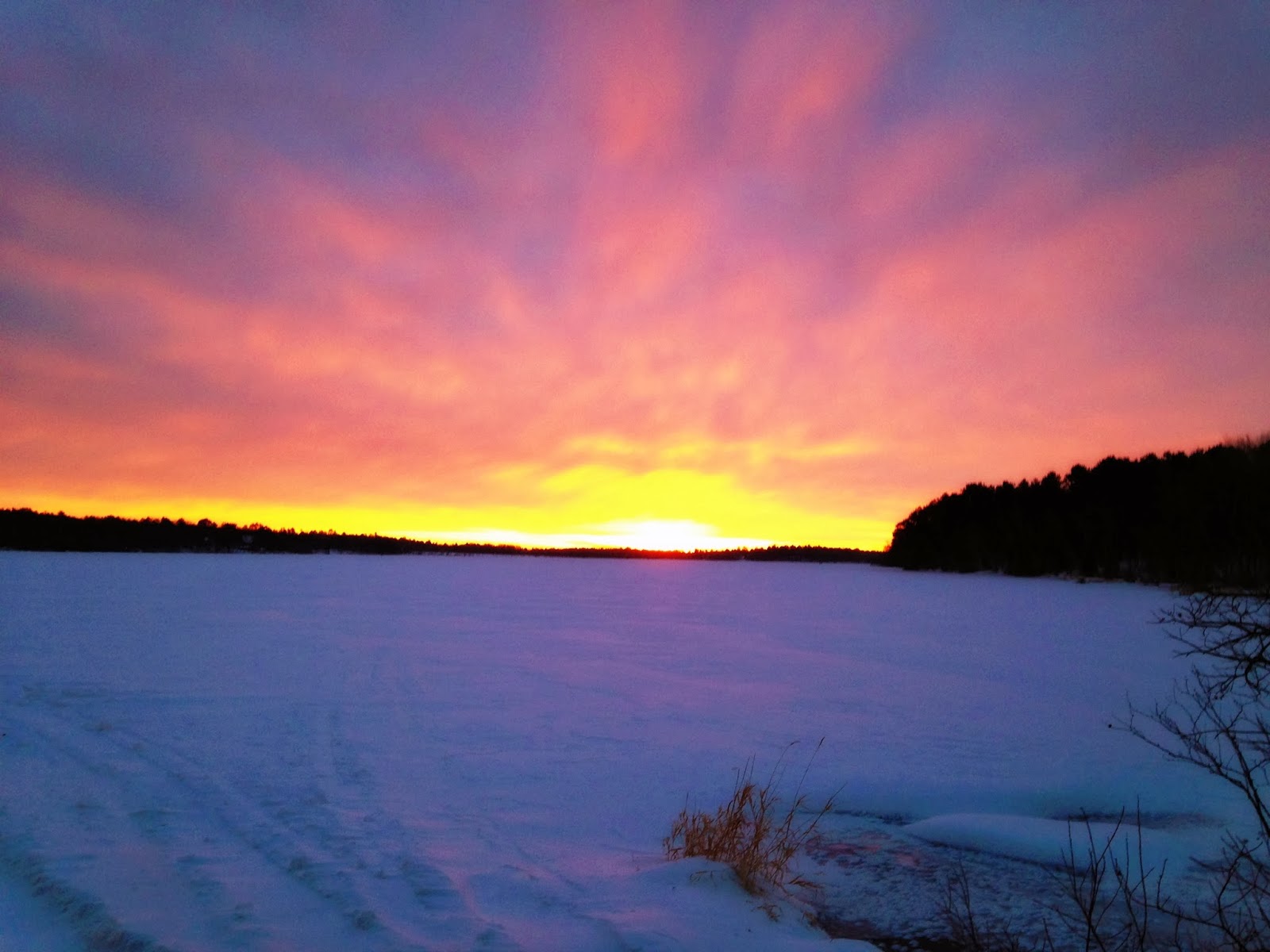 Because, while our boys got off to an early lead against Walker and started tallying goals- the rest of us had our eyes glued to another game going on…

The USA Olympic game against Russia.  It had just gone to the shootout, and TJ Oshie ( a Northern Minnesota native who we had the pleasure of watching in high school, then college, and now as an Olympian!) was doing what so many of us have watched him do for years- score goals for his team!! 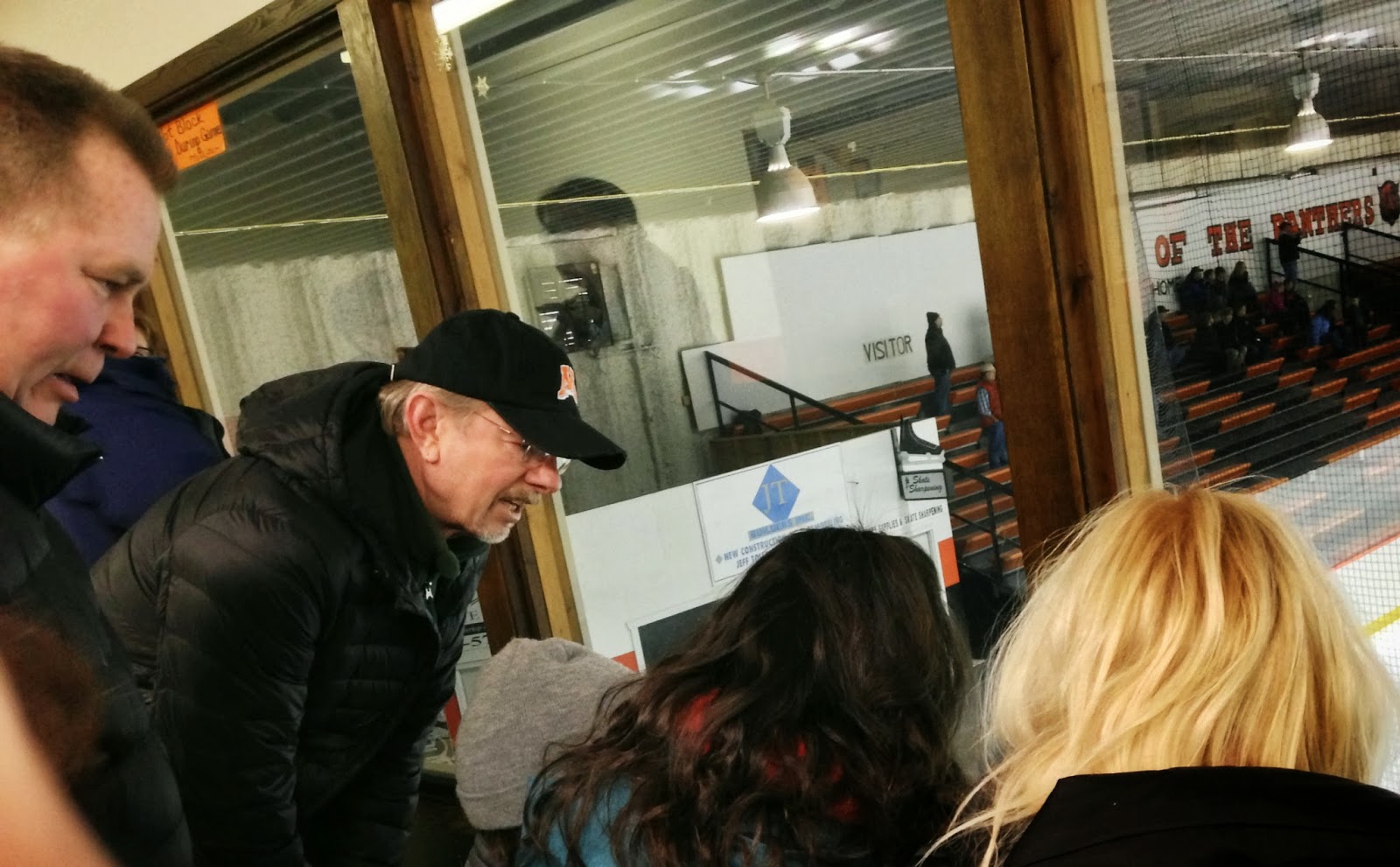 We all crowded around- and watched another big moment in the making- Team USA beating Team Russia- in another standout moment in history!

And don't you love what TJ had to say when he was being called a hero?  "The American heroes are wearing camo," he replied. "That's not me." 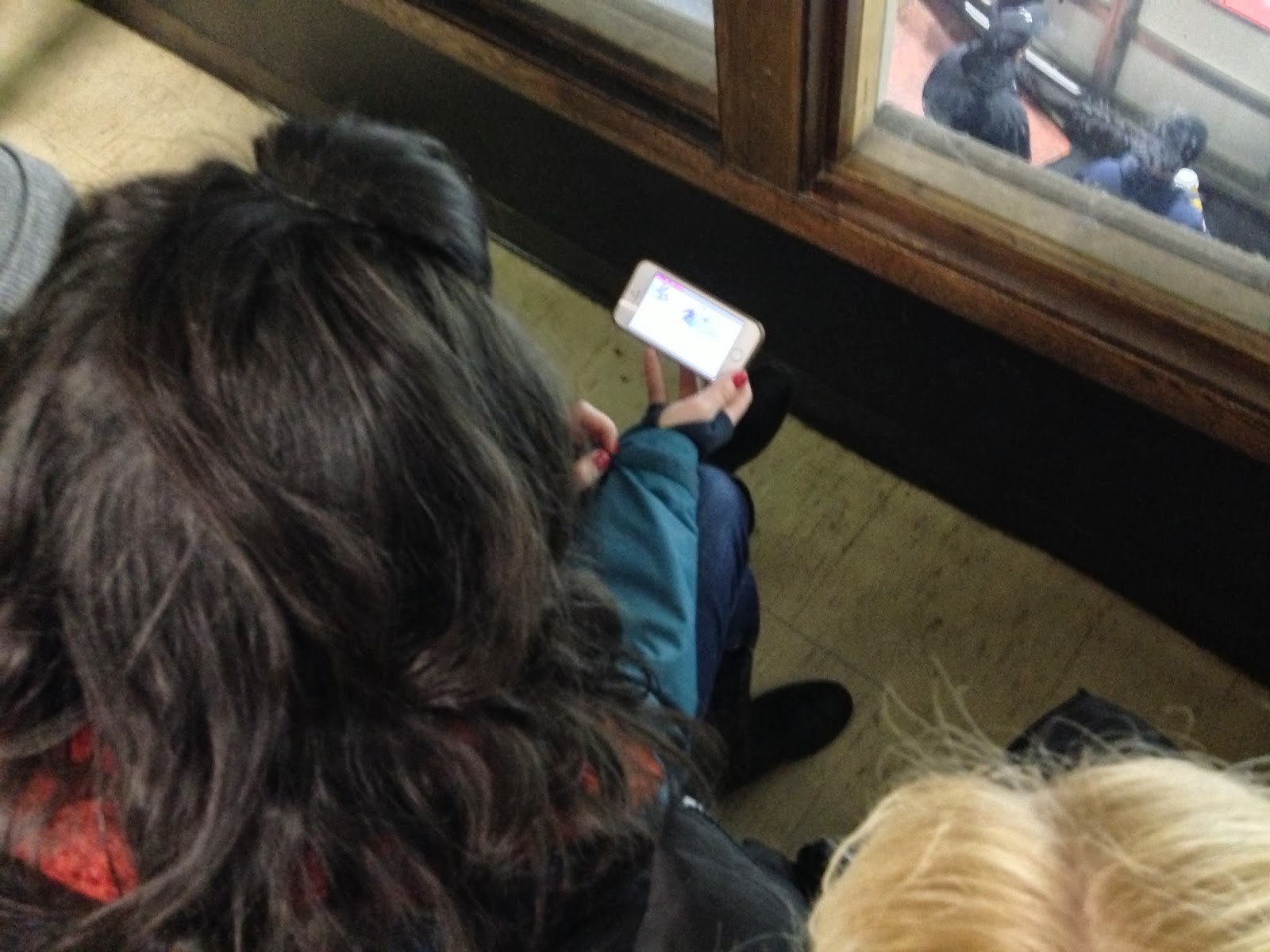 So we went back to the lake to rest up for our next big game Saturday night.  If we won we'd go on to play Sunday morning.  But if we lost, Colton's season would come to an end.

We were playing Brainerd and knew the game could go either way.  We'd lost to them twice before, but hoped the third time would be the charm.

While we got down two quick goals right away, the team did a good job of holding off their offensive rushes.  Colton, affectionately being called "Rooster," made save after save and his whole team rallied to help keep the puck out of the offensive zone.

But when the 4th puck got by Rooster, it started to feel like it would be too much for us to overcome.

In a bittersweet end, the other team managed two more goals, while we mustered one at the very end-it simply wouldn't be enough.

The Peewee B's lost and were eliminated from the District tournament.

For one of the first times, Colton's head was down and he was visibly shaken.

It was a long time before they came out of the locker room.  We waited in a crowded lobby, knowing our kids would be devastated.

Colton held it together until our eyes locked through the crowd of people.  Tears sprang instantly to his eyes and he finally broke down.  He folded into my arms and the tears streamed, unabashedly.  He felt so responsible for the losses.  I uttered every word I could to try and help him see they both win and lose as a team- never as an individual.

My momma heart was fresh with the pain of watching her son take the loss so hard.

And yet, it also surged with pride, as parent after grandparent, after coach,  took the time to come over and speak heartfelt and encouraging words to him.

Even Rooster's big brother told him how proud he was of his work and effort.

It was later that night that Rooster crawled in bed with me to warm up for a few minutes.  I asked him if he was feeling any better.  In a moment of pure clarity of thought and emotion this is what he had to say.

"Today was one of my most favorite games.  I was only sad we lost because it was a district game and it means our season is over.  Otherwise what I care about is for everyone to see how hard I am willing to work.  I am just hoping everyone will see that I did everything I could- I was willing to face the hard shots and not back down, I didn't lose focus, and I tried so hard.  I want to move up a level next year.  And I am just hoping everyone saw today, that maybe I deserve that chance too."

Clearly he left it all on the ice- blood, sweat, tears- with a smattering of hopes and dream- it was all there.

I could only hug him a little harder.

Superman graciously composed a video of some of Rooster's saves from the game below.

I am happy to say the Moorhead Bantam AA's came out on top and earned the top seed in the District tournament!  Nolan had two goals and an assist and the team won 6-1. 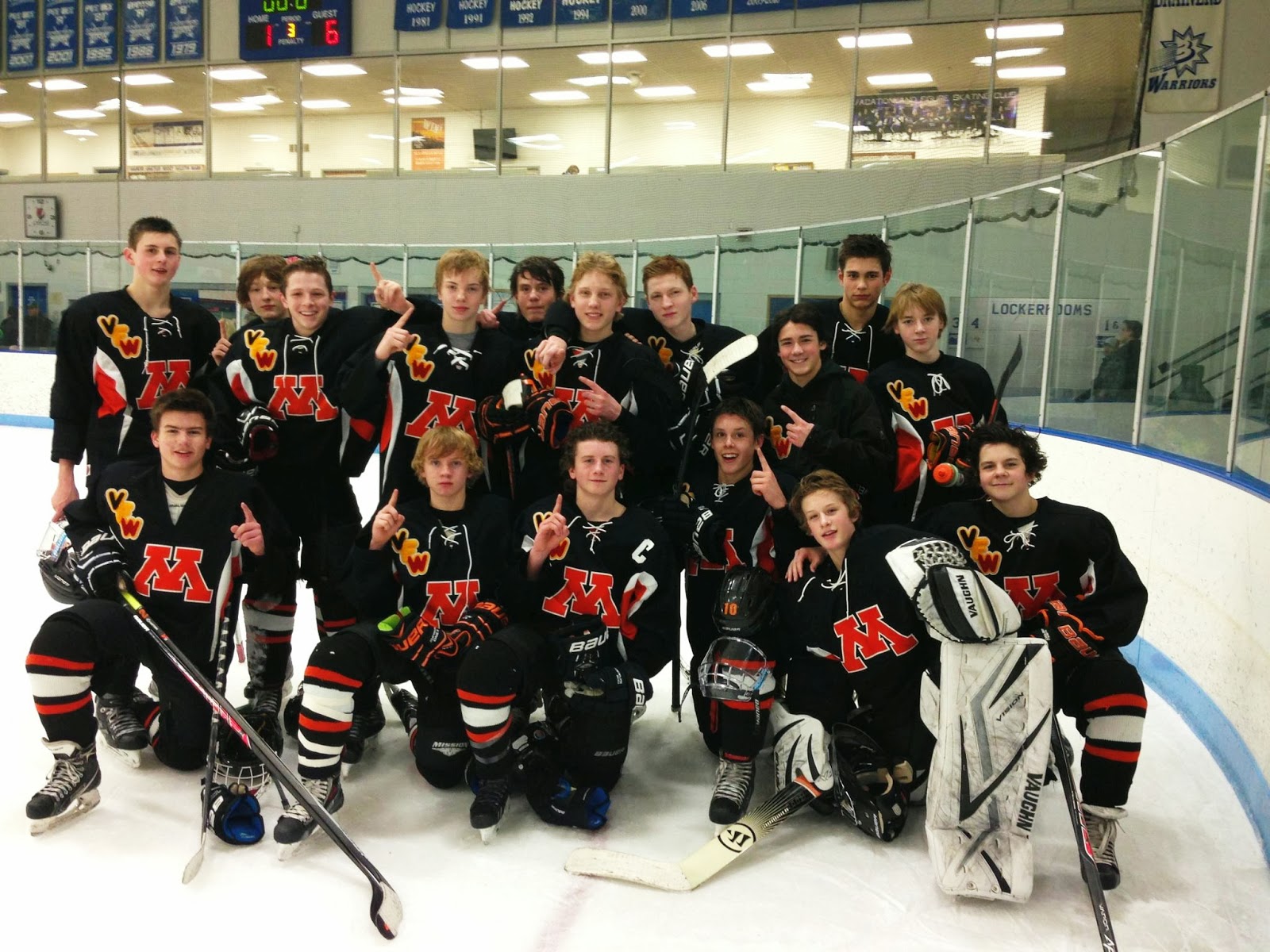 Sunday, became our rest and recovery day, and a pretty fun day!

The lake cabin had no tv reception and no wifi.  I have to say it was refreshing, and even the boys found plenty to do.

Welcome to the Westra's version of the "luge."

All that's needed is a sled, a slope, and some slippery snow. 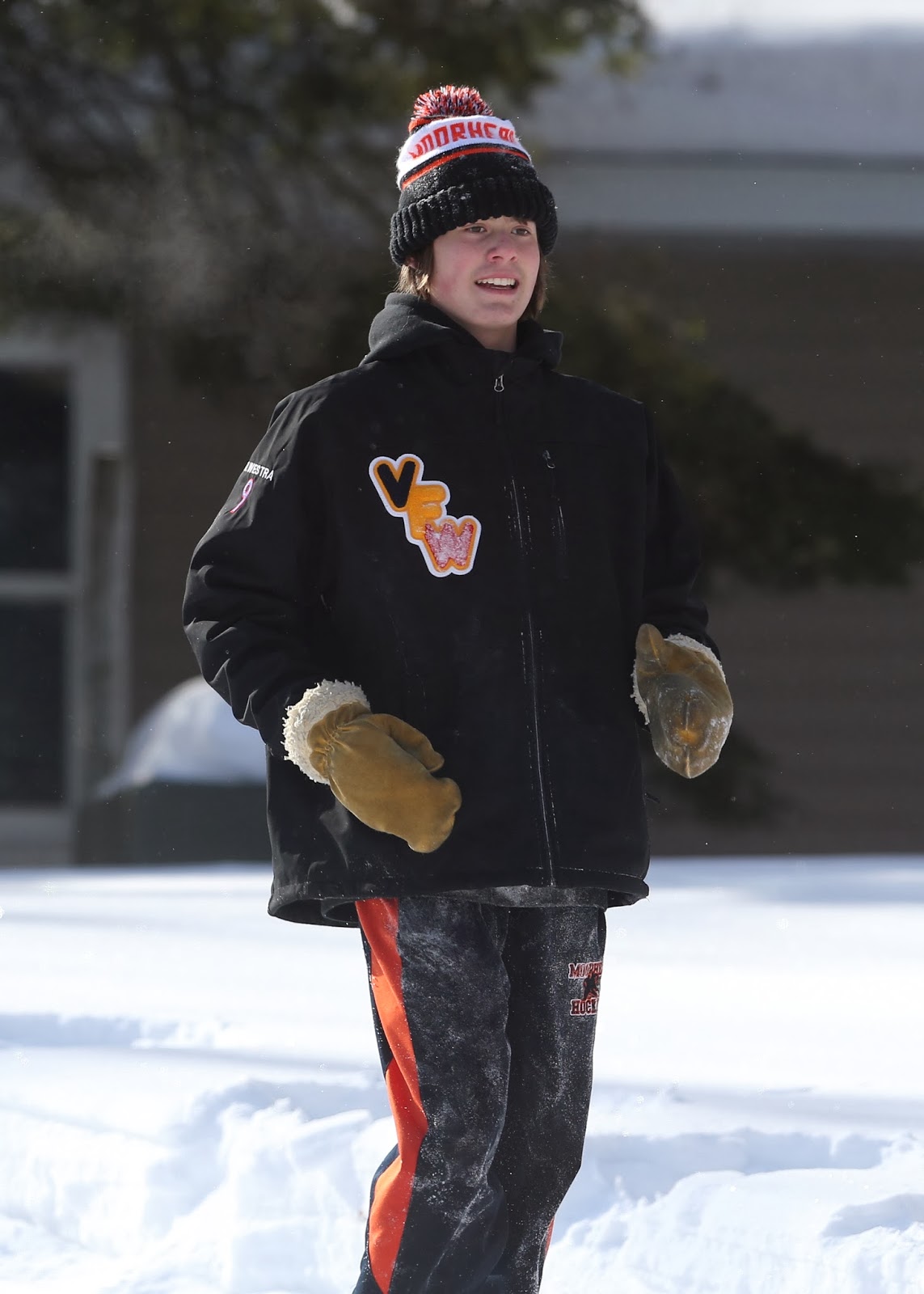 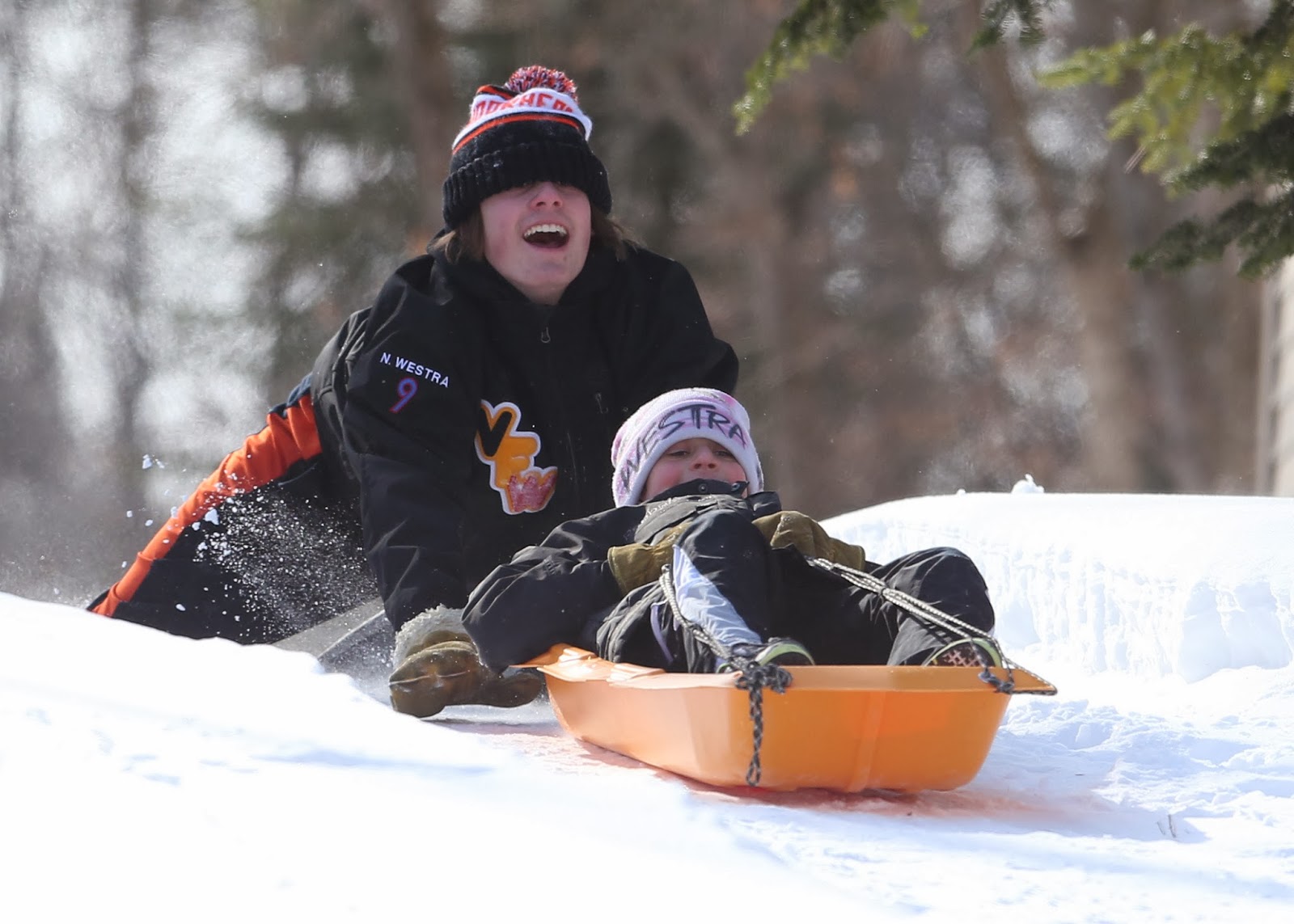 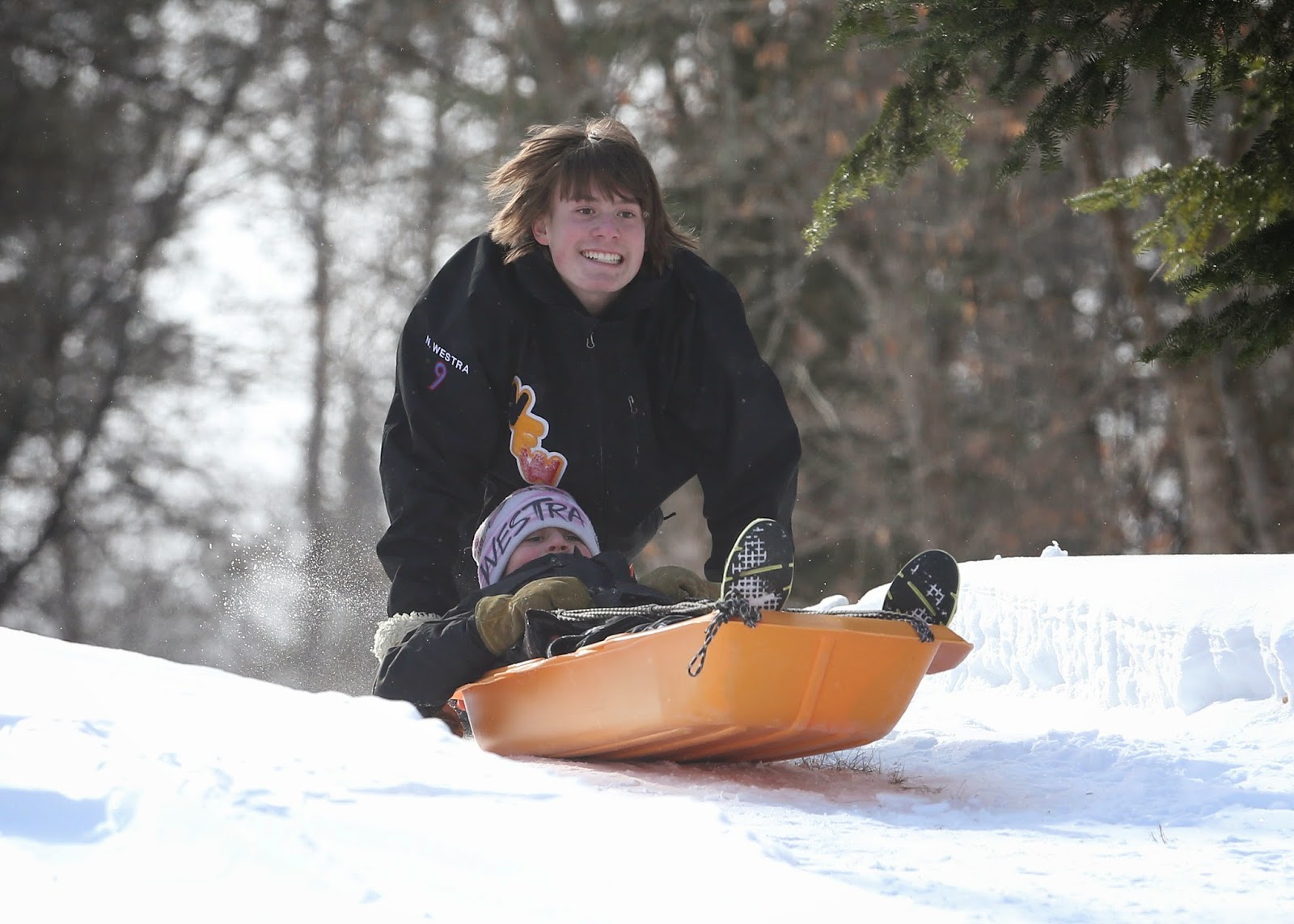 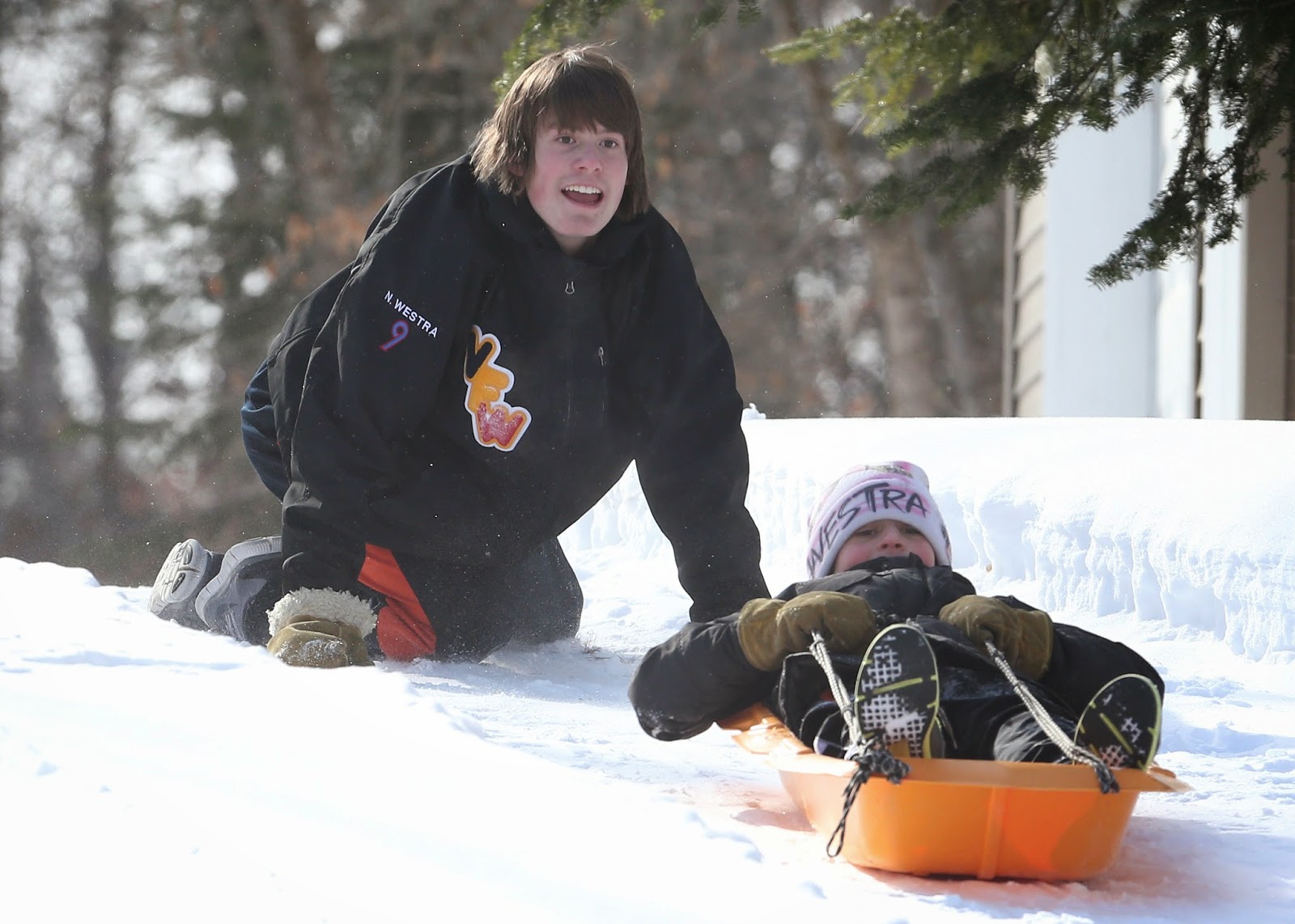 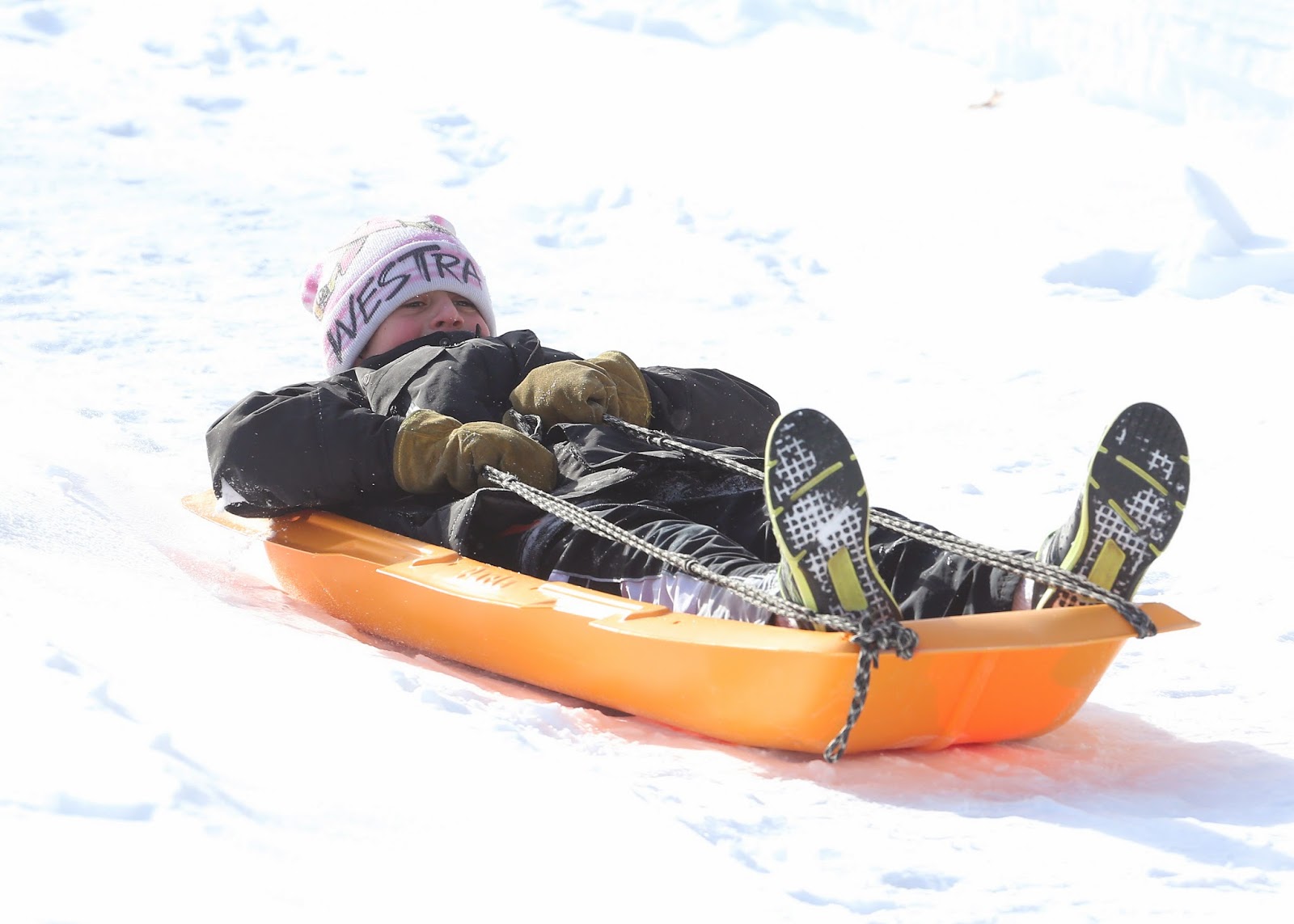 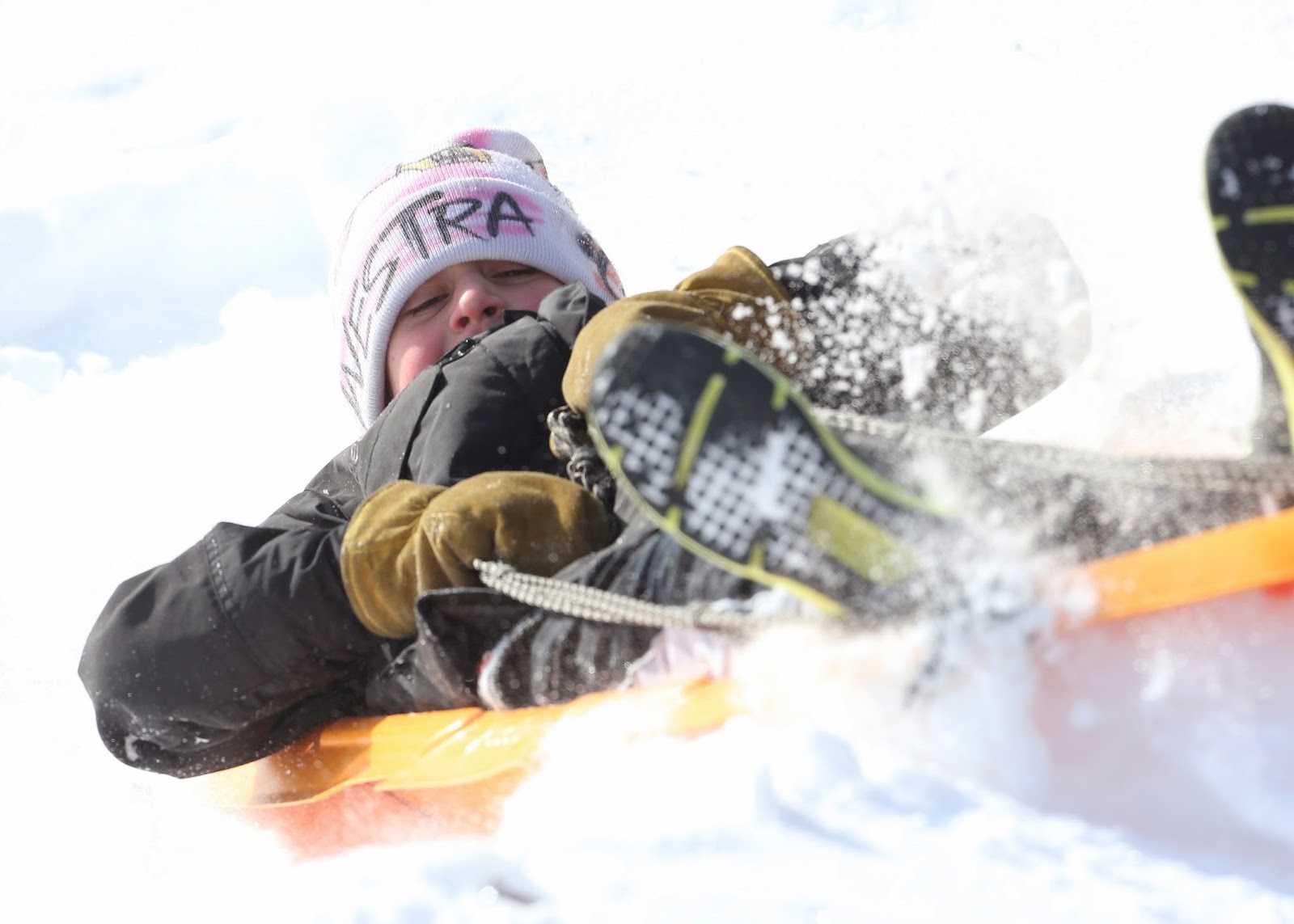 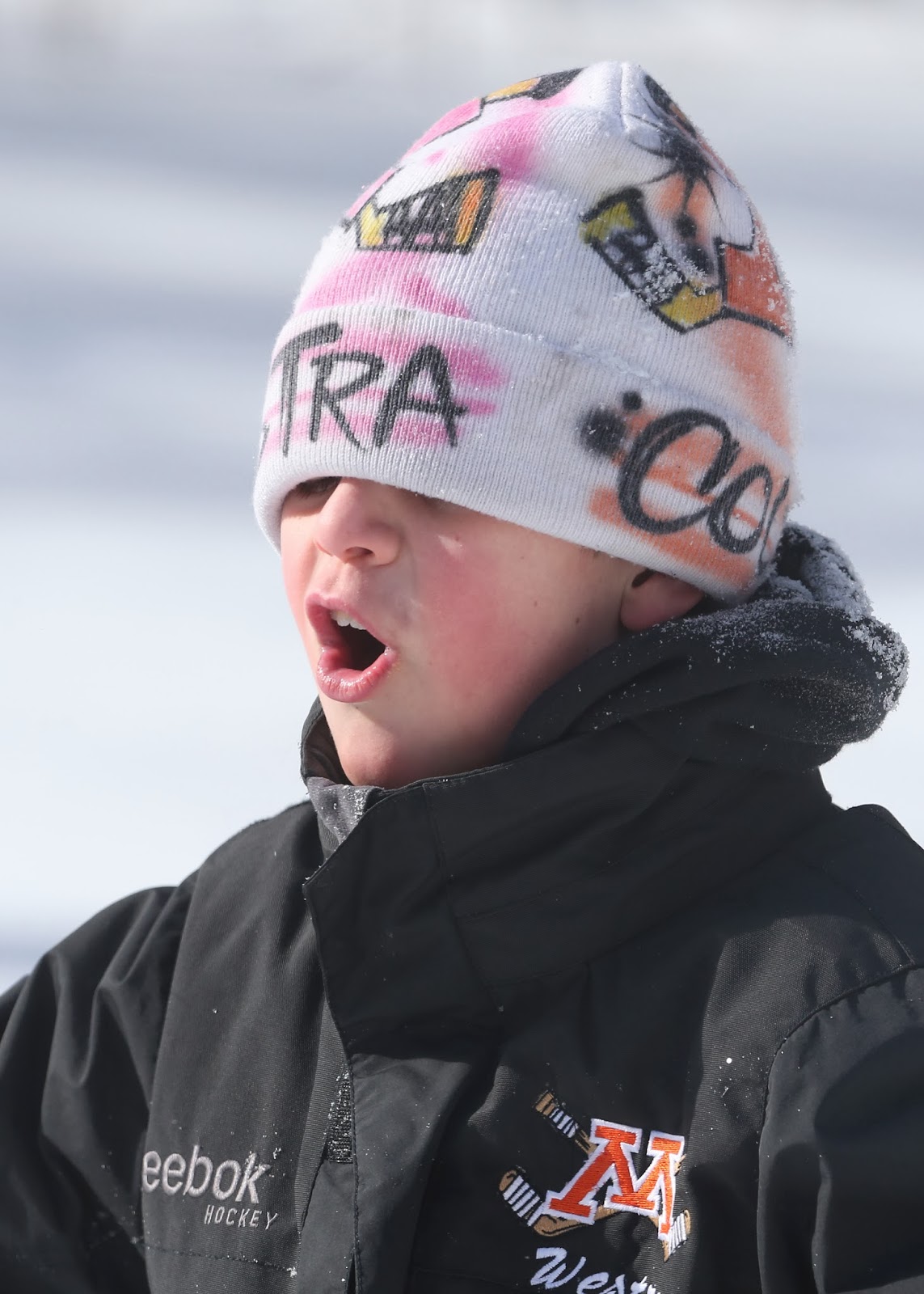 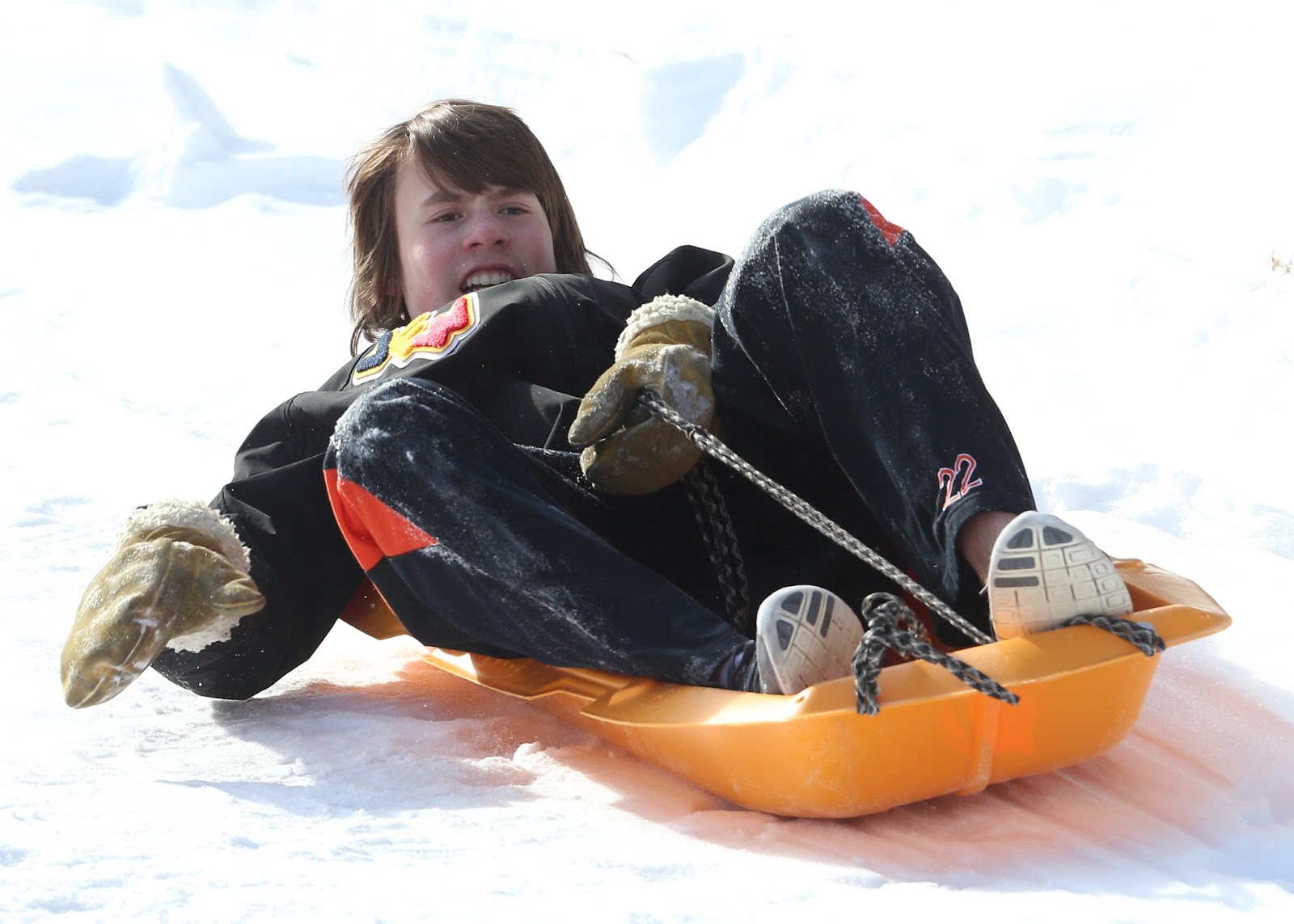 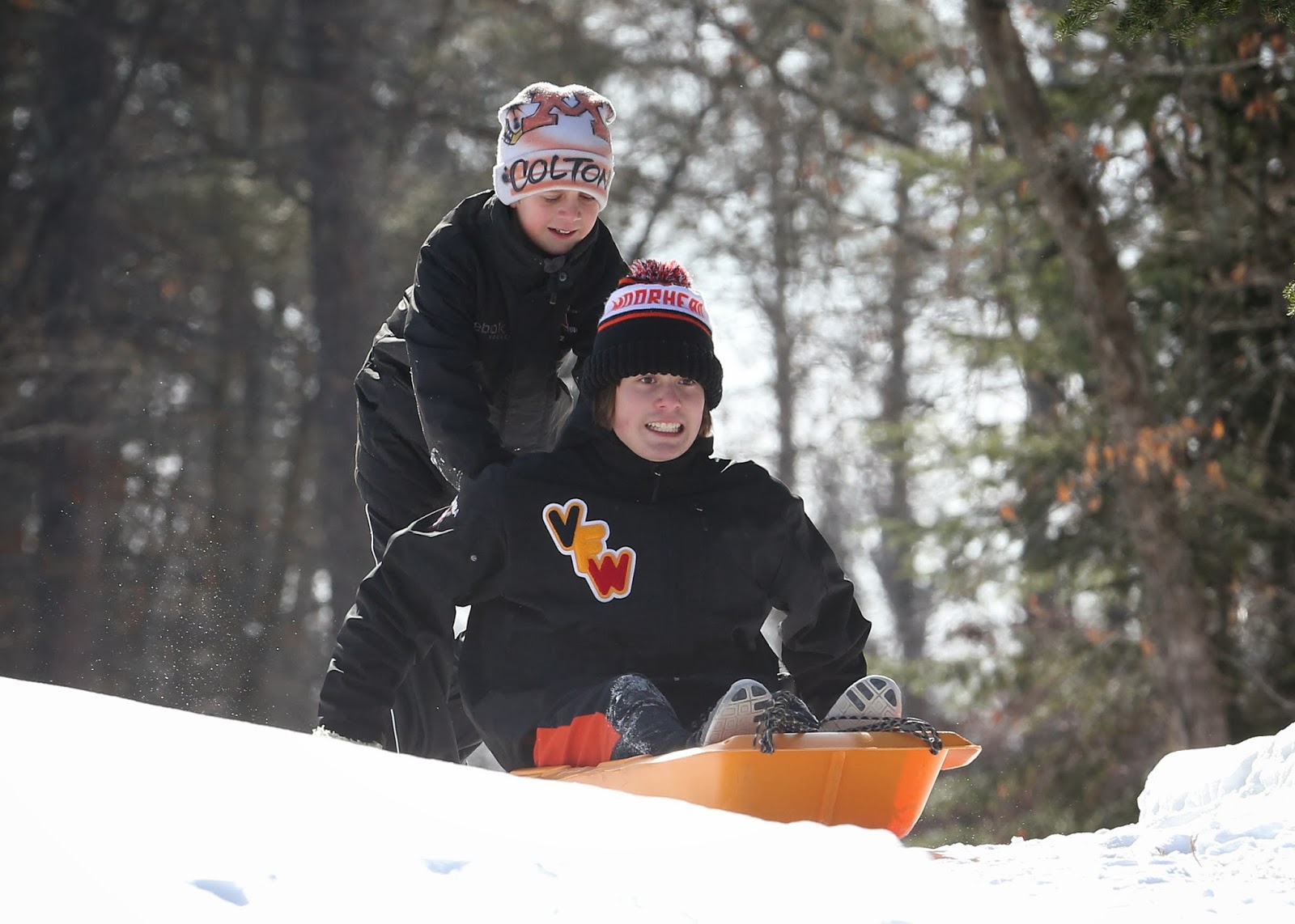 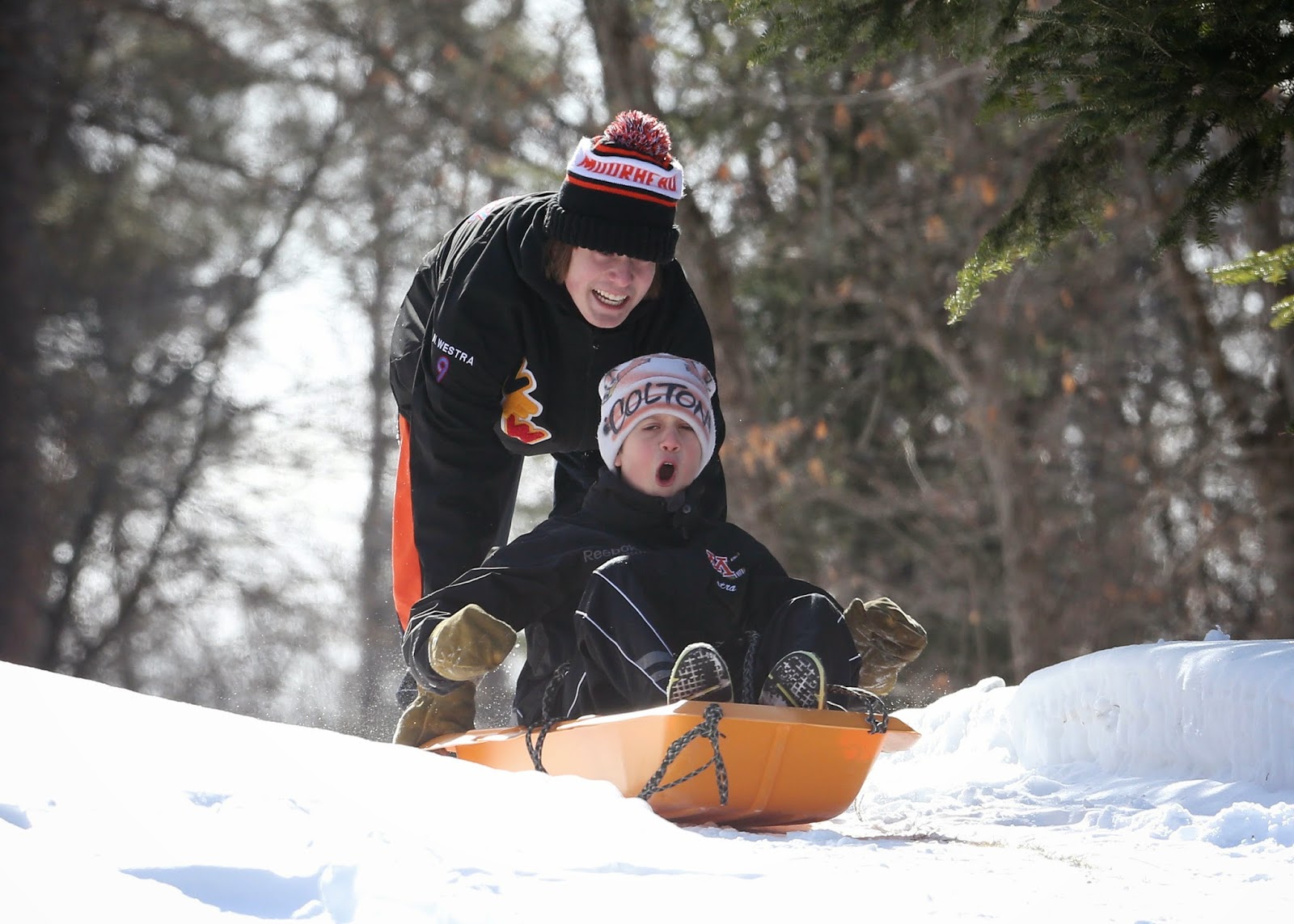 Tuesday I have a full day at Roger Maris.  I need to go in early to get my labs done, then I see Dr. Panwalkar after almost 6 weeks of not seeing him, then I will have infusion.  Rick is traveling so I am going it alone.  My lymphedema has skyrocketed over this past week.  My right hand balloons on and off into a pretty moderate degree of swelling and becomes quite useless and uncomfortable.  I've got my beautiful compression sleeve and glove on at all times and will see if I've earned the golden ticket back to PT.  More details to follow soon…