Really… he is just a big tease.  That Mr. NED that just subtly hints that he might be tapping me on the shoulder.  I've longed to dance with him, its true.  To have him fully envelope me in his safe and secure arms, if only for the briefest of spins around the dance-room floor.

Mr. NED, or officially, "No Evidence of Disease" is what so many of us Stage 4 Breast Cancer Survivors hope to achieve one day.  Stage 4 doesn't have room for remission.  Remission is rare- so rare- that when the evidence of cancer is gone, its called "no evidence of disease," because its often a brief interlude.  A few weeks may pass, a few months it seems, and then cancer asserts itself again.  This is the nature of Stage 4 disease.

So instead of remission, we long for a phase of NED.

The page had barely gone out for Dr. Panwalkar yesterday, when he arrived in the exam room.  He greeted Rick and shook hands with both of us in one swift motion as he went to sit down.

I had come prepared and there was a rapid exchange of questions from me, answers from him and then return questions from him to me.  Back and forth we lobbied, covering a lot of ground quickly.

He then asked for me to put on a gown so he could thoroughly examine me.  He checked for the radiated lymph node and smiled when he said he couldn't feel it.  "Is it gone?"  "I think it might be gone!" he proclaimed.

I told him I wasn't sure- sometimes a ghost of an outline seems to appear under my fingers, but its definitely only a hint at what once was a solid mass.

He then goes to find the new lump.  I gently nudge his fingers over when he doesn't quite have it and then his fingers deftly examine the entire spot.

"Oh its small, he says, and movable."

I then blurt out a random idea, "Do you think if its only one spot, we could have Dr. Bouton surgically remove it?"

His eyes widen as he smiles and nods affirmatively.  "Yes, that would work fine. Providing we don't find spots in other places, we could just have him remove that one."

We'll do scans- an mri of your brain to check on it, and a ct scan of your chest to check on the new spot.

I suddenly remember to tell him about my hair.

"May I look?"  he says, sounding surprised.  I tell him I've read that its a rare side-effect of Tykerb.  I bow my head and tell him to go ahead and check.  He gently lifts my hair all throughout the front and sees the thin, bald spots.  He says we can do a steroidal cream if its continues and the spots become more pronounced.  He then realizes my hair is falling down over my eyes, and he graciously sweeps it back across my face so I can see.

Its always these moments when I felt "seen," as a person, instead of just a patient.  Such a simple gesture, that speaks to me.

He then comes over to my side and says, "you know, your tumor markers have gone down into the normal range now."

"They have?"  Normal?  My markers fell to normal?  "Just as you predicted they would Dr. P.  You were right."

Its then I that I ask about my "dance partner," Mr. NED, standing just over Dr. P's shoulder.

I choke on the word. Will he say it?  Is this correct thinking on my part?

I finally mutter softly "Would I be considered NED?"

"Yes, he laughs, yes, if the tumor marker is reliable it would suggest you don't have much in the way of disease right now."

I sort of tuck that gem away- Mr. NED is indeed flirting with me.

"We'll repeat the tumor marker tests in 3 weeks and go over your scans.

I would like you to stay on the Tykerb, even though I know you don't like it."

"Then, I am thinking you should have your ovaries out, and start Aromasin and Affinitor.  But we will talk more about that next time. "

I am well past my scheduled time with him.  But he makes certain I don't have any more questions before he leads me out of the room.

He pauses side by side with me, before he turns to walk away, he reaches his arm around my shoulder hugging me and wishing me a Merry Christmas.  I reach my arm around his waist hugging him back, and wishing him the same.  I then look up to catch his eye and say "Thank you."  He smiles, nods and walks off.

Our friends and family continue to bless us in such touching ways.  I can't begin to properly photograph all of them and do them any justice here, but rest assured I am writing out some heartfelt thank you notes and counting grace throughout many moments of my day.

Love getting these necklaces from a friend.  The roads were icy and she bravely navigated her husband's work van to venture over to my house and gift me with these.  She knows these are a "God" thing as she hung unto them for an unknown reason and then discovered "Embrace" was my word. 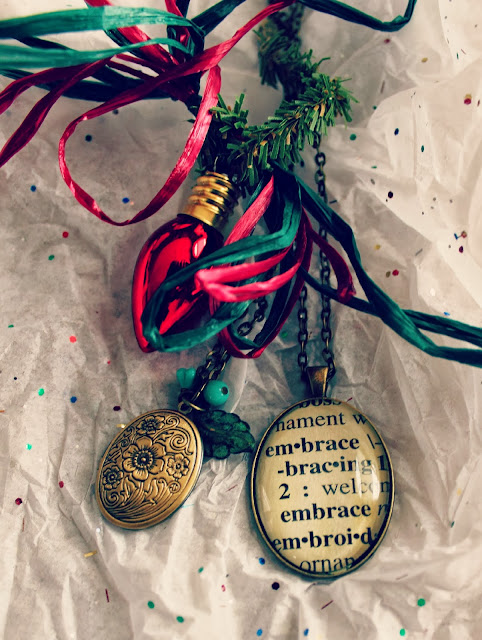 The boys surprised me by putting the tree up after I attended a long weekend full of hockey games.  The cold in the ice arenas really settles deep within my bones and makes for a painful aftermath.  But the joy I felt upon seeing this truly made up for it. 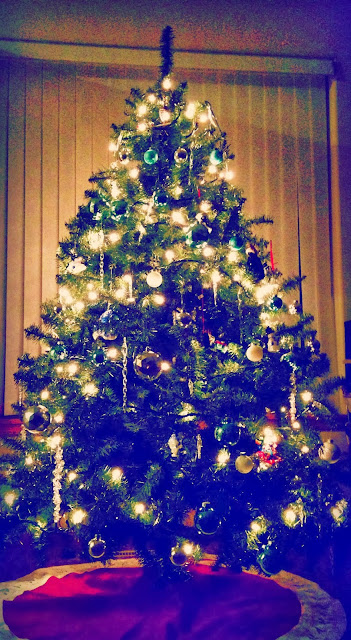 I had a full day at Roger Maris yesterday, including a planning meeting that ran well into the afternoon. Its exciting to be asked to be part of some new and exciting developments at Sanford.

I arrived home just as the glorious sun was sinking below the horizon. 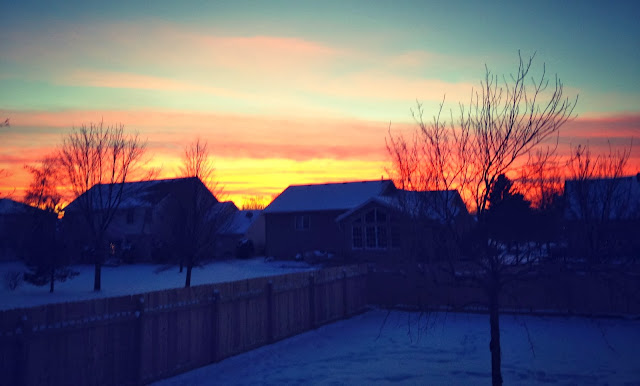 I finally turned my phone back on as I climbed onto the bed.  My phone vibrated, buzzed, rang and sang, long and hard.  Unable to resist the calling of sleep any longer, I drifted off to sleep, saying thankful prayers for all the prayers offered up for me.