We were going to Nashville, for a little hockey.  To shoot photos of Matt Cullen, of the Nashville Predators for the Fargo Forum, and for Cully's Kids, Matt and his wife Bridget's children's foundation.

But really, what we had was an experience bigger and better than I could have hoped for. I've been searching for perspective.  For that "thing" that makes it all tie together.  I had been thinking this trip was meant to be about travel and fun and some work.  And it was all of those things.  But so much more.

Really, it was all about connecting the dots.

"...you can't connect the dots looking forward; you can only connect them looking backwards. So you have to trust that the dots will somehow connect in your future. You have to trust in something - your gut, destiny, life, karma, whatever. This approach has never let me down, and it has made all the difference in my life."  Steve Jobs

Over the next few days I hope to connect those dots for you.  To tell the story of the dots, that were never really supposed to be about a trip to Nashville.  But were.  And how, in one amazing week- so many of them connected in the most powerful way.  Just wait... you'll see.

First, let me start at the beginning and lay the foundation of all the dots...


Leaving Saturday was hard- those boys so have my heart.  And yet, I love to travel.

I have to admit, traveling in the car was hard on me.  My lungs and back were not enjoying the damp and cold. We drove through two solid days of rain spending our first night in Omaha, and then arrived in Nashville late Sunday night.

But Monday morning we awoke to sunshine and blue skies.  We strolled around a bit, but were too tired to venture too far.  We drove out to the mall as I was looking for comfortable walking shoes.  The Mall at Green Hills is so not in my league- but we had fun window shopping.  We ate a light lunch and then napped that afternoon, knowing our friends were arriving and we'd join them for dinner.

This was the view out our window.  Our hotel was within walking distance of most everything. 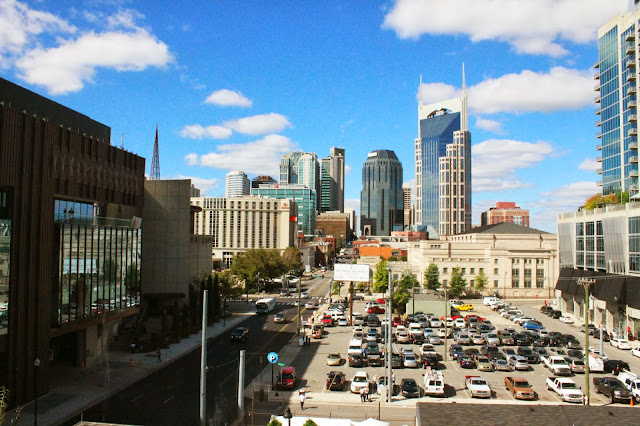 At 530 pm we took off to meet our friends.  They wanted to eat barbecue. 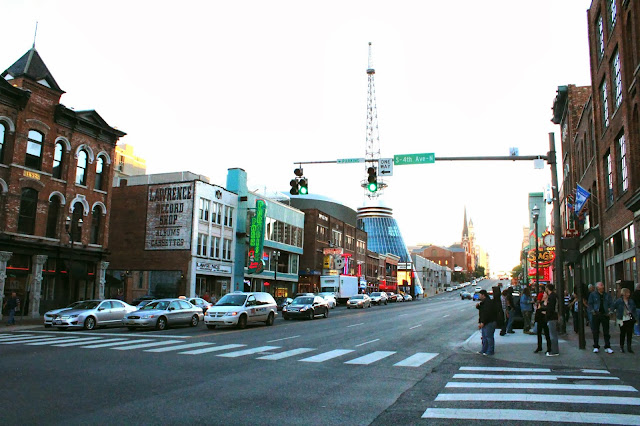 And "Jack's" was highly recommended by all. 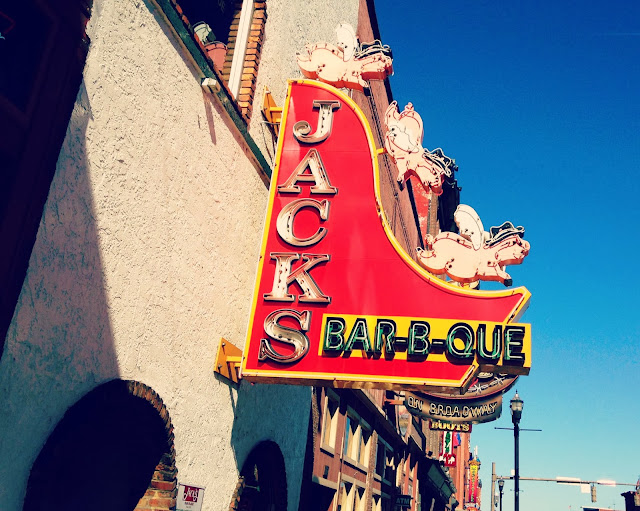 I grabbed a seat and watched with big eyes as the line formed all the way through the restaurant and right out onto the street. 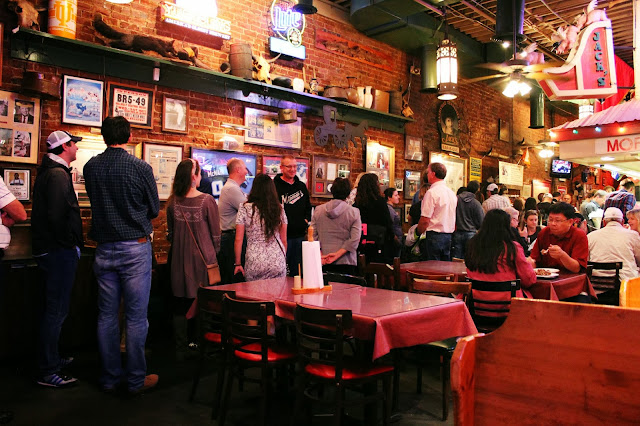 Flying pig chandeliers were part of the funky charm. 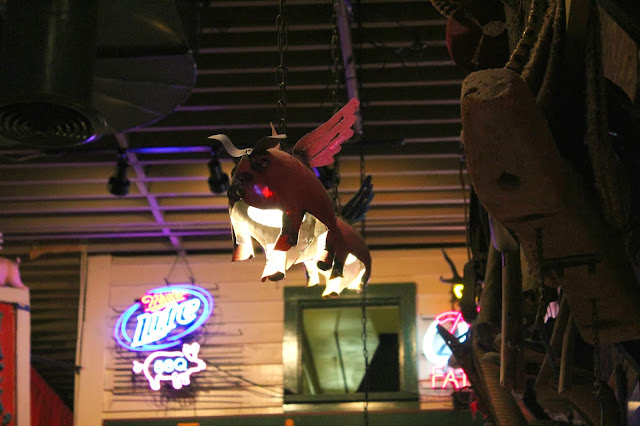 The food was inexpensive and to me the epitome of Southern cooking.  Tasty, with just the right amount of seasoning and a heaping dose of love added in.  No wonder this place was popular.  Rick and I went back for lunch the next day. 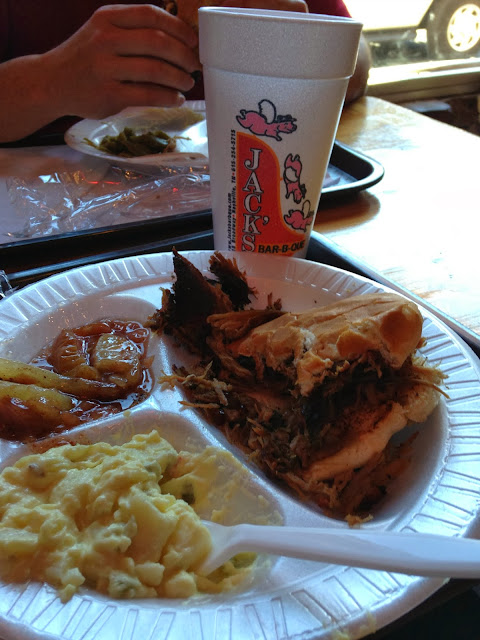 After dinner we strolled around outside taking in all the entertainment and establishments. 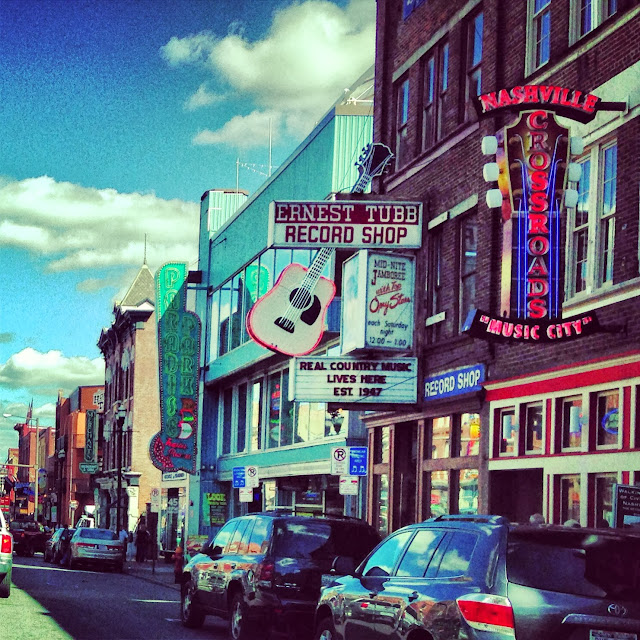 Walking into The Ernest Tubb Record Shop felt like stepping back in time.  In the back of the store is a stage, where singers still come to play on Saturday night, after having performed at the Grand Ole Opry.  The store is literally lined of autographed photos of everyone from Johnny Cash to Loretta Lynn to Vince Gill, etc.  One of the employees gave an impromptu history lesson about all the singers known to come and play at the store.  One of the things we experienced over and over again, was a downright passion for all things music on display everywhere. 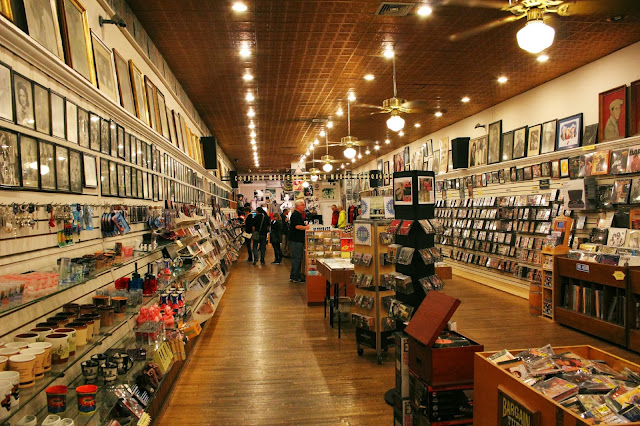 Rick and I were thrilled to be spending the night with long time friends Slick and Ronette who flew in to watch the hockey game the next day. 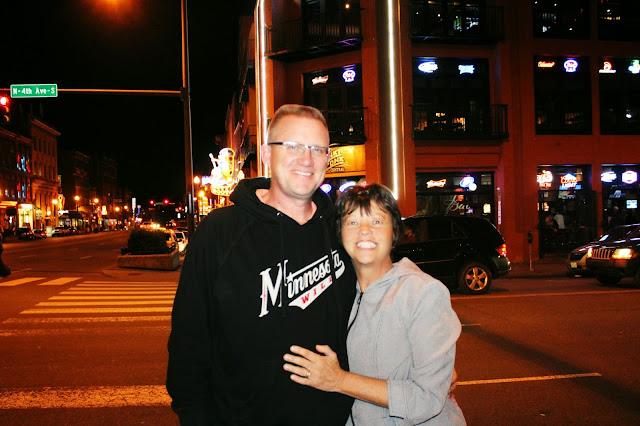 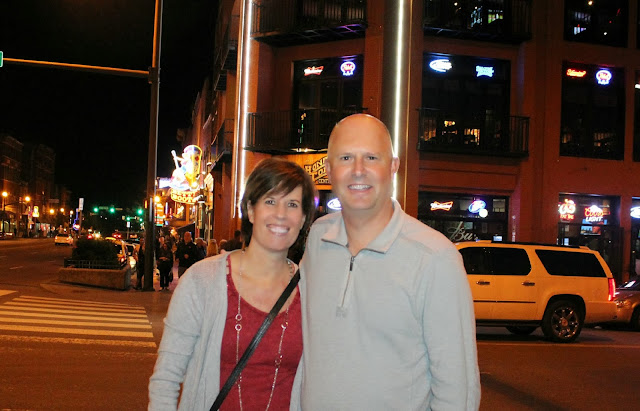 We had decided to find a spot to listen to some live music... just which place would it be? 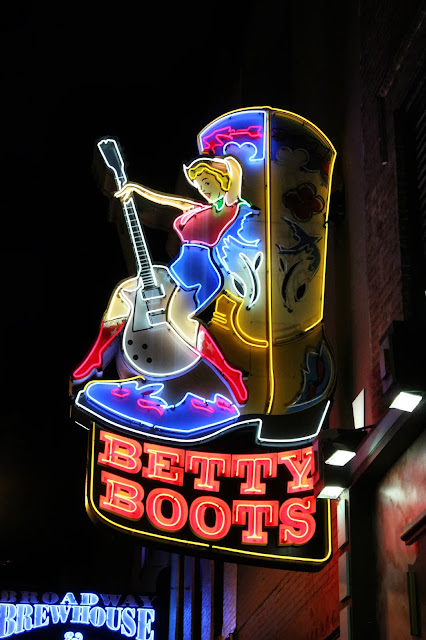 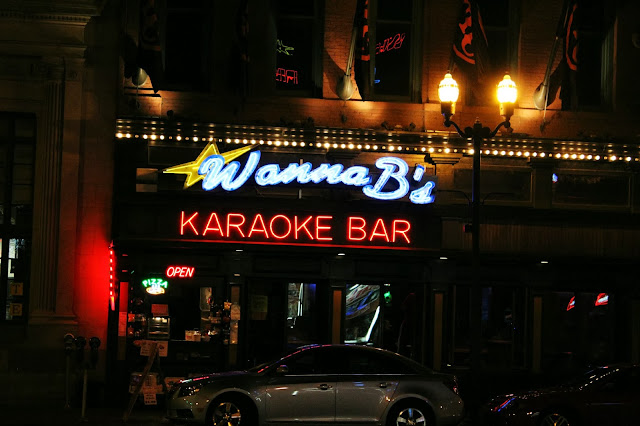 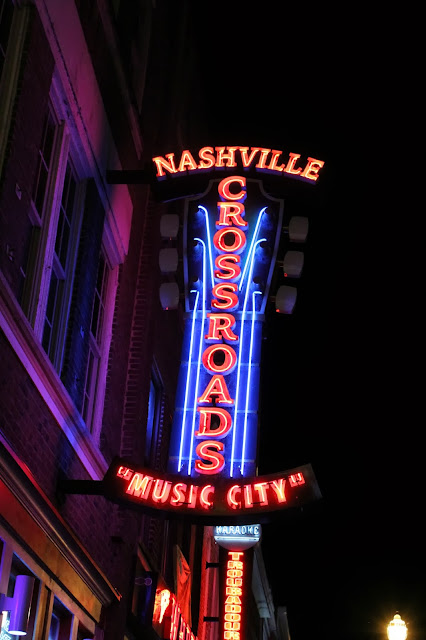 The Whiskey Bent Saloon was just warming up when we arrived.  We were so taken with the whole musicality of all of the singers.  The guy below had been sitting in the audience and then popped up for just a couple of songs before sitting down again.

The two dancers in white t-shirts below were a country song in the making.  He had been singing and she had come in and sat down alone.  She sat by herself for the longest time, song after song, at the table, clapping along to the music.  After his stint on stage, which we all enjoyed, he went and introduced himself to her.  I saw them shake hands.  He stood, she sat.  They chatted at their table, just across from us. Over the course of the night he eventually was asked to sit down.  They were both enthralled with the music.  Ronette and I were enthralled with them. 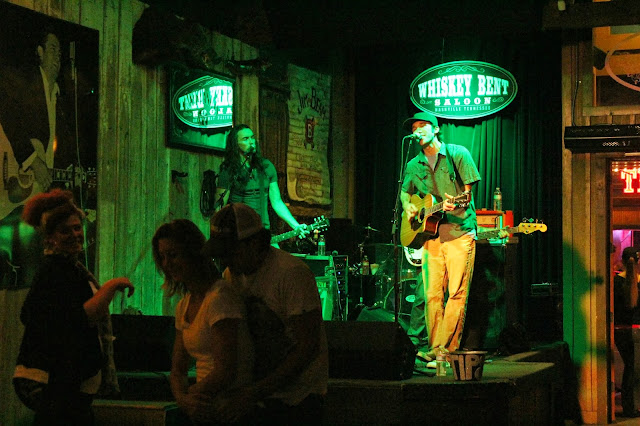 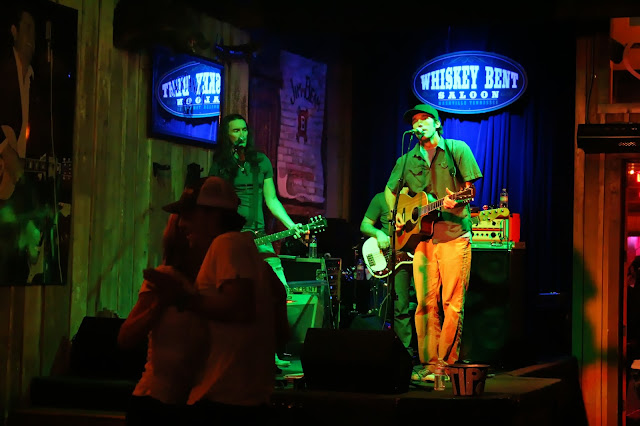 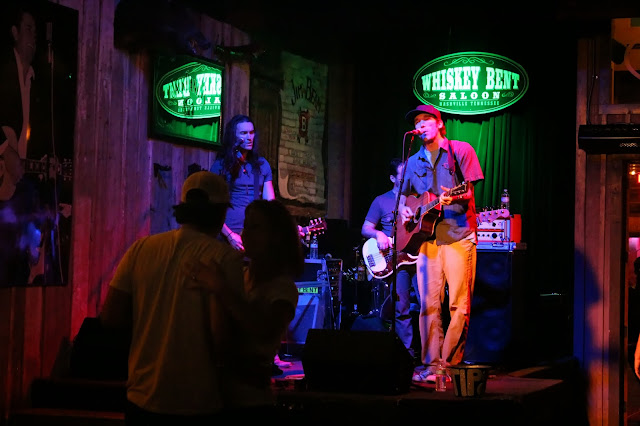 Then suddenly, the right song played, and they were both up dancing... and dancing well I must say.  They knew their way around the dance floor and fell into an easy groove with each other.  A part of me was cheering them on.  He seemed the perfect gentlemen, and she the perfect lady.  When they weren't dancing they were deep in conversation.

At one point they put on their coats and left.  He graciously extended his arm, and she grabbed ahold of it.  Polite, and still reserved.  But smitten, so it seemed.

To our delight, they returned shortly thereafter.  And danced long into the night.

Ronette and Slick had left, but Rick and I lingered just awhile longer, enjoying the music.

This singer was from Winnipeg and we laughed at how close to Fargo she lives. She could do a mean Shania Twain song, and some Miranda Lambert on request too. 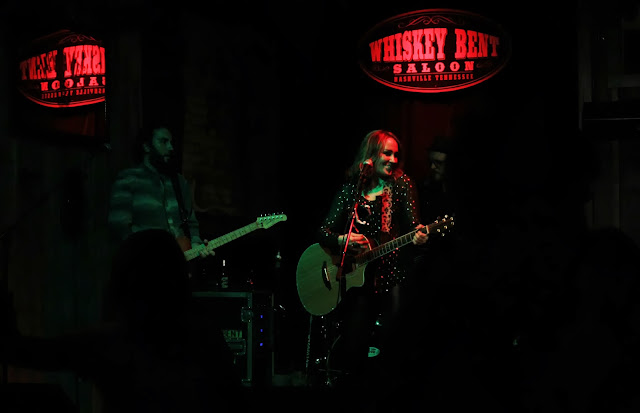 While the crowd waxed and waned all night, we eventually grew tired and headed out long before the music ended. 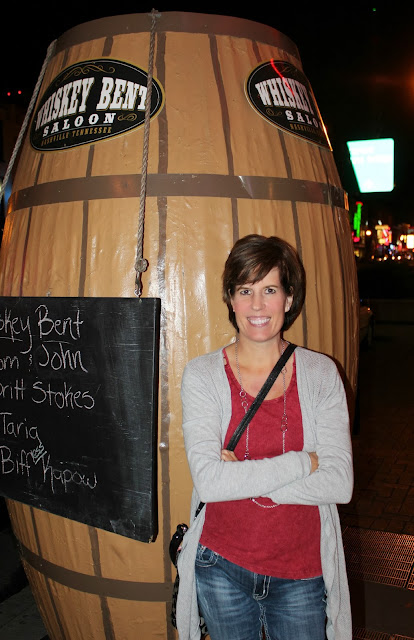 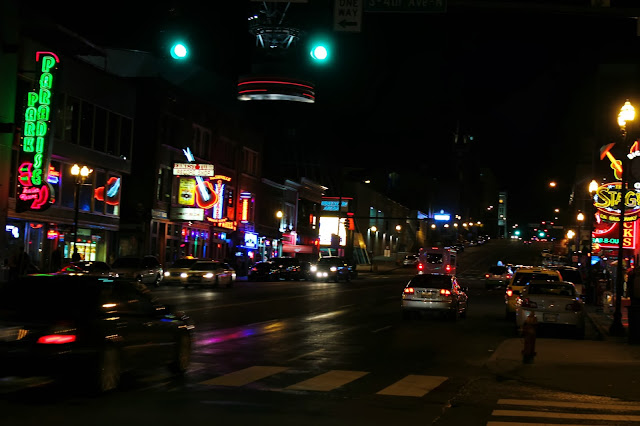 And this is the place where I'd love to upload my videos.  The songs, the sounds, the frame-by-frame play of so much of our trip.  But in trying to get it off my phone this morning, my phone reprogrammed to an older version of itself.  Sadly, I lost all of my photos, videos, contacts, texts, etc, from the last year and 1/2.  I've spent all day learning, there is nothing I can do to recover them.  I'm deeply mourning the chunk of history erased at the mere errant click of a finger.

At least I had my Canon with and am so happy to have those photos still to share.

I have more to share and will do so over the next few days...

But first I will see Dr. Panwalkar tomorrow and have infusion.