Its the simple things that undo me at times.  Even with Rick gone all week, I had no intentions of being "Superwoman."  I simply wanted to keep up with the day to day.  Other than needing a nap after infusion on Tuesday I rebounded well.

Instead of weighing Rick down with another project, I created our Christmas Cards this year.  It took me a long time to figure out how to edit one of Rick's big raw files into something I could use.  In between times, I also carpooled with others to and from hockey a lot- I even managed the 5:15 am wake up and 5:45 am run to the rink with Nolan.

Chauffeur, chef, boy wrangler- I was so on top of it. I managed my own role as well as fulfilling some of the things Rick would do.  My last duty was to sew the 4 sponsor tags on the back of the hockey jerseys for Nolan's tournament this past weekend.  But my joints were swollen and stiff after infusion and the tags were cumbersome for my hurting hands. With time slipping away I called my mom.  Knowing my mother does not sew, I figured she would know of someone to ask.  She sure did.  So I pinned each tag where it needed to go- two for Nolan, two for Colton- and dropped them off at her friend's apartment.

It was 5:00 pm when the jersey's were done and ready for me to pick up.  I'd been up since 5 am and I was dragging. I needed them by noon the next day for the start of Nolan's tournament so I was relieved to have them out of the way.  Or so I thought.  I brought them home and set them on the railing.  It was Nolan who discovered the mistake later on.

"MOM- Colton's tag is on MY jersey!  My tag is on his!" I tried prying them apart.  I tried to slide a kitchen knife underneath the stitches.  I tried to find a small scissors.

I finally did the one things I always do in an "emergency," I ran to my neighbor Darla's house.  We may not have found a seam ripper, but a steak knife eventually did the trick.

It was late that night when with blurry eyes and unsteady hands, I sat down to tackle that sponsor tag. Steeling my resolve I performed the ugliest, most crooked stitch imaginable and tacked that tag to the jersey.  I knew we were in for a long weekend and my energy stores were depleting rapidly.

Friday was the first day of Nolan's Peewee AA tournament.  Our first game we played a team from Grand Forks and we knew they would be competitive.  I signed up for a three hour shift working credentials.  But the rat-race-pace of the week had taken its toll on my energy.  My lungs had begun to burn with each trip up the stairs, or outside to the car.  The cold air in the rinks made it especially hard to take deep breaths.  I was just grateful to play a small role, with help from others.  It isn't easy to compare sometimes what I used to be able to do, to what I can do now sometimes.

I can't say our boys played their best game against Grand Forks, but we ended in a tie.  Because it was pool play- points were assigned and they would determine who ended up earning a chance to play in the championship game. Our next game we played Thief River Falls and we looked more like the team we all know.  The passes were smooth and sharp, and scoring came from all our lines.  It was a lopsided 18-2 win.  But because of those two goals against us?  Our next game we had to not only win, but get a shut out as well, to earn our way to the championship game.

It simply wasn't meant to be.  We held off Waconia for the longest time, but eventually they scored 1 lone goal on us, and our dreams of the championship were over. We still beat them 9-1.

Pool play points can be a tough commodity.  So even with 2 wins and 1 tie and no losses,  we were going to play for 3rd place. 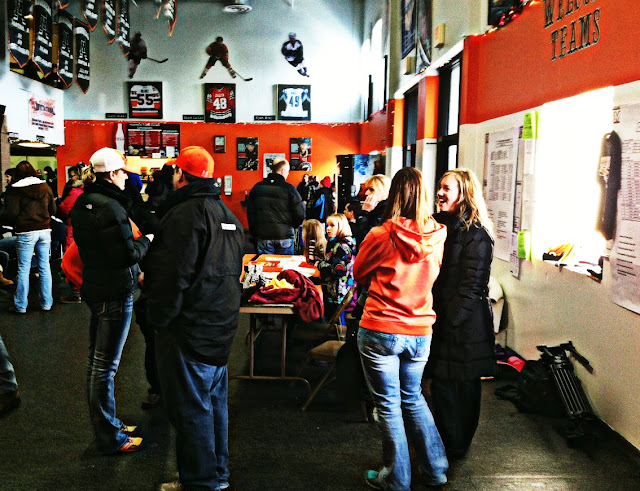 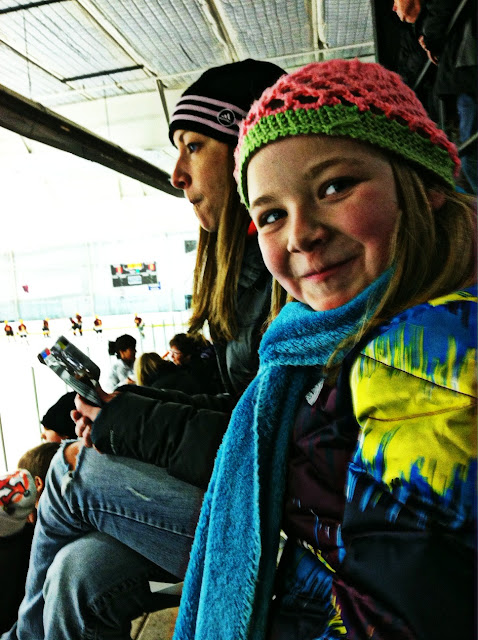 The "Steve Dorsey" Invitational is named after a high school classmate of mine.  He went head first into the boards at a high school hockey game back in the mid 80's and broke his neck, causing him to be paralyzed.  I took a few minutes to think of Steve and hoped our Peewee's could at least capture the 3rd place plaque in his honor. 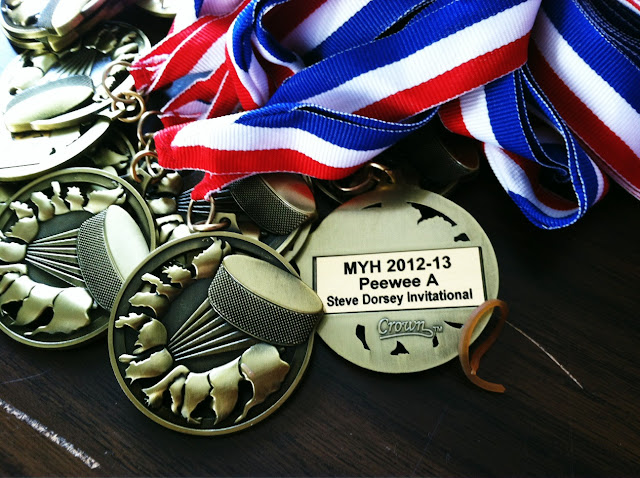 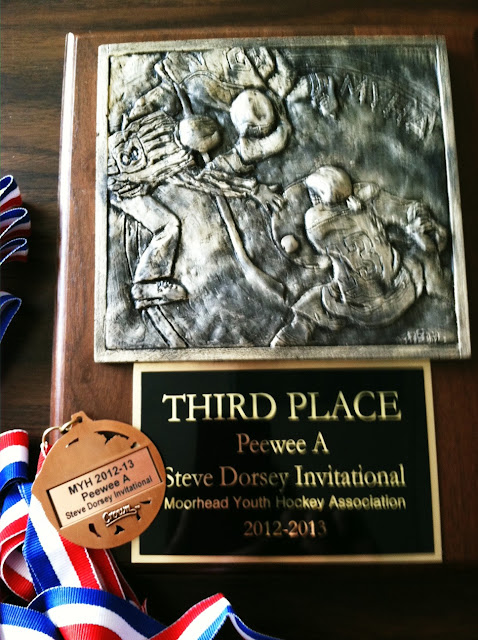 We got off to a rough start.  We've played Fergus Falls two times and beat them both times.  Its hard to beat the same team 3 times.  We were down by two goals before long and we began to wonder if our boys would be able to rally this time.

They were a bit subdued in their celebration- knowing in their hearts they had held high hopes of being in the Championship game.

But they had 3 wins on the weekend and 1 tie.  They maybe weren't first place champions this weekend, but they are on a mission to be champions one day.  I have no doubt they will be. 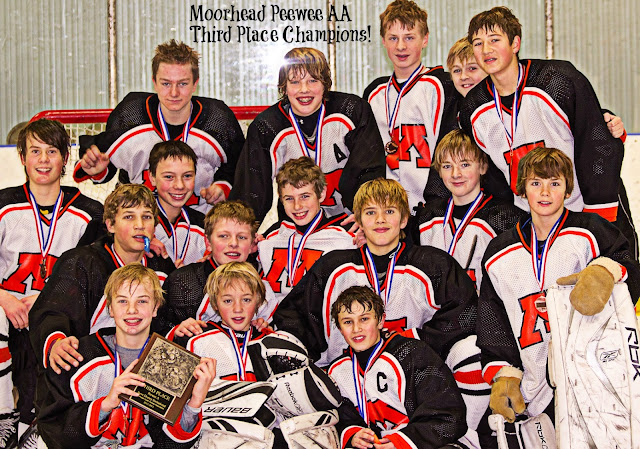